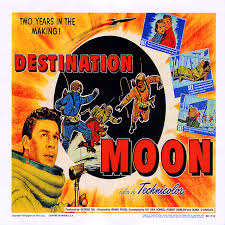 The companion piece to Conquest of Space .This is a science fiction classic and according to Wiki : 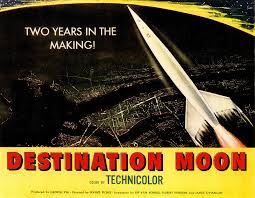 The film's premise is that U. S. private industry will mobilize, finance, and manufacture the first spacecraft to the Moon. Given the growing Soviet threat at the time, the film makes the assumption that the U. S. government will then be forced to purchase or lease this new technology to remain the dominant power in space and on the Moon. Industrialists are shown cooperating to support the private venture

When their latest rocket test fails and government funding collapses, rocket scientist Dr. Charles Cargraves (Warner Anderson) and space enthusiast General Thayer (Tom Powers) enlist the aid of aircraft magnate Jim Barnes (John Archer). With the necessary millions raised privately from a group of patriotic U. S. industrialists, Cargraves, Warner, and Barnes build an advanced single-stage-to-orbit atomic powered spaceship, named Luna, at their desert manufacturing and launch facility; the project is soon threatened by a ginned-up public uproar over "radiation safety." The three idealists circumvent legal efforts to stop their expedition by simply launching the world's first Moon mission well ahead of schedule; as a result, they must quickly substitute Joe Sweeney (Dick Wesson) as their expedition's radar and radio operator.
On their way to Moon, they are forced to go outside Luna in zero gravity, wearing magnetic boots to stay on the hull, in order to free a frozen piloting radar antenna greased-up by the inexperienced Sweeney hours before the launch. In the process they carelessly lose one of the crew overboard, untethered in free fall; he is cleverly retrieved by using a large oxygen cylinder as a retro rocket. After achieving orbit around the Moon, the crew begins the complex landing procedure, using too much fuel during the Luna's descent phase.
On the Moon, after exploring the lunar surface, they begin to calculate the mass needed to lighten their spaceship in the Moon's one-sixth gravity to get them back home with their remaining fuel. No matter how much non-critical equipment they remove and leave on the lunar surface, the hard numbers radioed from Earth continue to point to one conclusion: someone will have to stay behind on the Moon if the other three crew are to return safely to Earth. With time running out for their return launch window, the crew engineers their way home: They jettison the ship's heavy radio equipment and their sole remaining space suit, with air tanks and space helmet, directly through the spaceship's open airlock. The critical take-off weight is finally achieved, and with just minutes remaining, Luna safely blasts off from the Moon with all aboard. As the crew approaches the Earth, the film's traditional "The End" title card heralds the dawn of the Space Age: "This is THE END...of the Beginning."

At first glance there doesn't seem to be a lot to mine for retro future games such as X plorers, Star Ships And Space Men Second Edition, or Stars Without Number. Even Mutant Future and the rest of the retroclone pack.
The truth is that this science fiction classic rocks and here's why. Destination Moon marks the departure for corporations cooperating for the exploration of space. These would have to be mega corporations with a complete set up for exploration of the cosmos and the resources to exploit them. 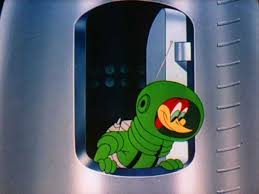 At the heart and soul of Stars Without Number there beats a cyberpunk heart. Given the fact that you've got retro megacorporations you can bet your bottom dollar that there is going to deals, double deals, and high drama involved with these ventures.
Put your PCs in the center of this and your ready to go.

For a game like Star Ships and Space Men Second edition, Destination Moon represents the continual struggle of dealing with challenging environments and the restart factor of trying to get to the next planet while dealing with the megacorporation struggle. Just add alien ruins, monsters, and you've got a struggle on the high frontier

For a game such as Xplorers this movie is the perfect fodder for life on the frontier worlds where your PCs are struggling to get the jump on the next world and the technology levels are lagging. The nuclear jet drives, colony ideas, and private corporate jump on the space race are all there to mine and use.

The Us vs "The Reds" of the movie can easily be replaced with a rival world or corporation. The ideas laid out in the movie really bring home some of the desperation seen in the lower technology level space colonies.

The pulpy style of the retro future games that have been all the rage lately Destination is a great resource to draw from. When you begin looking into background of the pulps, literature, science fiction of the 1950s. There's a tremendous sense of anticipation and that can be easily translated into a campaign of the Outer Colonies and beyond.

Finally for a game like Swords and Wizardry the idea of the gods from the sky easily points to the possible Atomic rocket origin for any number of fantasy worlds and might act as a bridge gap to a Spell or plane jammer setting. 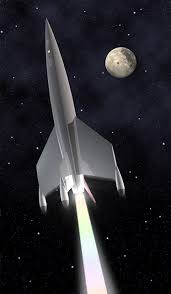 You can see a solid copy of the movie on Youtube right over Here
Posted by Needles at 9:13 AM