Journey Into The Chasm - A Stormbringer Rpg One Shot Actual Play

So in the middle of the afternoon I get a call from Larry that they need a DM fast. Someone is really sick and we need a replacement on our Greyhawk game as fast as possible. I wanted to continue the already on going game of Stormbringer! No can do because the player whose in that game really wants to continue and so its key that he's there.
So what can you pull together in two hours? Well I've got this idea that I've been working on for my Stars Without Number Game. That sounds great. We'll see you in two hours.
Six players and a three hour tour are where I'm at this moment.
The Harlock sound track above was playing on the computer and so it was a natural progression to marry a version of the Captain here with the Eternal Champion. 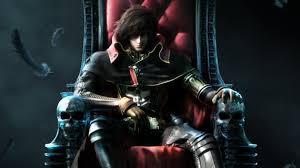 The "Chasm" in my Stars Without Numbers game is this huge chasm in space millions of light years across and wide. A celestial desert devoid of anything except the occasional wandering star and its companion planets. The place has at its very core a group of "white holes" that spews out billions of tons of energy, radiation, and the debris from a million black holes, planar doorways, and what not. The flotsam and jetsam of a thousand planes. The Talon sector borders this area with another sector acting as a buffer zone. This buffer zone is ringed by a series of ancient alien fortresses which were old when our sun was young.
Out there is a ship blinking a radio beacon across the universe. The call is growing fainter. 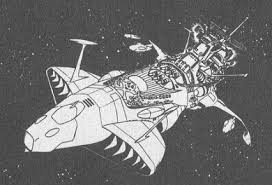 The PCs must investigate what or who the ship belongs to and why the damn "Time Center" is receiving the signal.

Have Plane Ship Will Travel 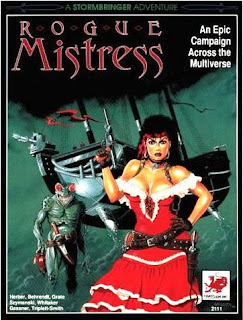 I take my Ps and Q's when it comes to plane hopping from this Stormbringer Module. Rogue Mistress is one of the best books for Stormbring for the three hour tour one shot modules. Here's the back of the product.
The multiverse", says a description of the product, "is a complex system of intertwined universes, each unique, with peculiar physical laws, varying influences of the gods of Law and Chaos, and differing in the degree to which the use of magic and technology are effective.
"Heroes of sufficient cunning and ability traverse the physical barriers between these universes by means of special devices, spells, or magical portals. Risking their very existence, such heroes reap the reward of fabulous magical knowledge or exotic technological weaponry.
"The Rogue Mistress is a vessel able to navigate among these million universes - a pirate ship of ancient origin, captained by the beautiful Maria de Tres Pistolas who leads an exotic free-booting crew gathered from across the Million Spheres."

The crew of the "All My Sins Remembered" made their way across the chasm. They were a motley crew if there ever was one.
They consisted of :
Whose Ship is it?

While the design is similar to the Arcadia it actually belongs to Captain Nehab of Nebularia! The Captain is a very dangerous servant of the Chaos God The Namless One.

His ship has found itself in the Chasm on mission for the Time Center thousands of years in the past.
The Captain was from the same planet as Darklon the Mystic. My favorite character from the poisoned pen of Jim Starlin. You can read about him right over Here
Captain Nehab of Nebularia!

Driven from his home planet by his cousin Prince Darklon the Mystic. Nehab journeyed among the stars until he came across the Chaos Sword "Night's Promise". The sword was actually the demonic essence of the Nameless One. The sword promised to reveal treasures beyond the ken of man and god alike. The sword lead the Captain deeper into the mysteries of magic and damnation each step taking him closer to the heart of Chaos itself.

Each time the captain took on a crew his deeds and sins would mount driving him further down the path of damnation. His eyes grew accustom to the carnage and wrath of Chaos. Finally he was gifted with a planar ship of his own. The ship was found upon the ever changing seas of The Grey.

The ship "The Dreaming Sadness" sat upon the shores of this Chaos world waiting for the next victim to claim her.  Captain Nehab took to that ship as if it was his right hand and with sorcery and damnation controlled the thing.

"The Star of Chaos" was the last magic bauble that brought the star tanned hide of the Captain to the Chasm. The Chasm claimed him and now the PCs were about to find out exactly why. There were strange energy readings aboard the ship. The party entered the ship after 12 hours in cryo pods. There the skeletons of crew were still at their stations. The whole ship was being run by Golems of Law. These automatons killed the crew and starved the Captain to death. The Star pulsing evilly in the skeletal hand of its last master. The distress beckon sent out as a warning to all.

As soon as the party entered and were immediately attacked by the things. No one would have the jewel or the Sadness ever again.

The golems were relentless and there always seemed to be another to take the next one's place. Finally the PCs found the "Nano Temple of Law" that was producing the damned things. A carefully placed set of spell from the party's two wizards and the laser lance of the Mantis/scientist warrior destroyed the "temple"
Just as one of the golems got the mantis scientist.

The party managed to recover the Star and was about to leave when "The Nameless One" appeared and demanded his prize. The god was surrounded by demons of the "Abnatural" orders ready to devour the party in an instant. 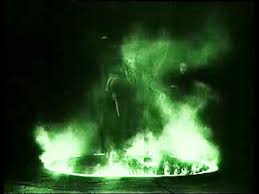 They did comply and left the ship as quickly as possible. "The Dreaming Sadness" came alive by itself and set sail deeper into the Chasm. Across the comm unit the characters heard the mocking laughter of the "Nameless One" echoing through their ship.
The characters returned to the calm of the Talon sector and a bar to get drunk in.
The PCs walk into the bar and pass by a very much alive Captain Nehab and crew speaking about going after the Star and the hazards of the expedition for their "patron"

Where Did The Ideas Come From

The players thought I'd be using this when in actuality I used ideas from this book and Dancers At The End of  Time combined with some stuff from the Warrenverse. There was of course some of my own twisted ideas. You can read up on The_Coming_of_the_Terraphiles and The_Dancers_at_the_End_of_Time
Also my love of Iron Maiden especially