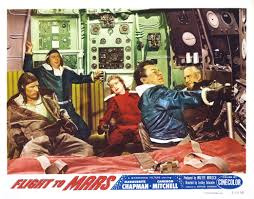 Flight To Mars is a "classic" 1951 movie about an expediation to Mars. The movie might as well be a companion piece to Rocket Ship X-M. The movie uses the same sets, costumes, and themes as Rocket Ship. Believe it or not there is a ton to mine for games. 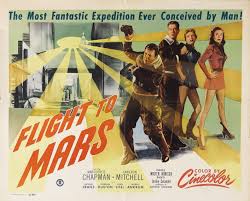 Flight has some really great things going for it. For example the whole movie could take place in a "Fall Out" Style retro future universe. The costumes, colors, etc are all very snap shot moment in time which means this has some great cross over potential for any of the Goblinoid families of games. Especially Mutant Future and Star Ships and Space Men Second Edition.

Plot according To Wiki:
The story involves the arrival on Mars of an American scientific expedition team, who discover an underground-dwelling, dying civilization of Martians. They are anatomically human, and are suspicious of the earthmen's motives, with the majority of the governing body finally deciding to keep the earthmen prisoner. 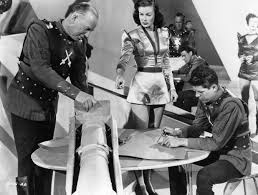 This film reuses almost all the cabin interior details from Rocketship X-M (Lippert Pictures, 1950, and filmed at another studio), except for some of the flight instruments. Even the spaceflight noises are reused. Similarly, the concepts of spaceflight are those postulated in that earlier film.
The main differences are this film postulates a planned flight to Mars, whereas the earlier film postulates an accidental flight to Mars, which accident occurs during a planned flight to the Moon.
Additionally, this film postulates a Martian species which is in many ways superior to Mankind, and poses a long-term, strategic threat there to, whereas the earlier film postulates a Martian species which is pre-literate, and a throw-back, as a consequence of a global nuclear holocaust which occurred many millennia earlier, and poses only an immediate, tactical threat to the voyagers.
A sequel, Voyage to Venus was proposed but never made.[2]
Here's the Trailer and Movie itself. Go take a look but be warned that this is a terrible movie with some fantastic ideas. Hey if Mystery Science Theater can get away with this so can you. 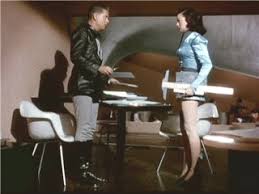 This is a Mars that suffered a short sale nuclear war and is just starting to sort of crawl out of the redoubts. Mars has a tradition of vast underground mega dungeons and this film is no exception. The costumes look like they came straight out of Rocky Jones and that makes for great gaming . These Martians are the last of their kind and could be the descendants of Bouroughs Redmen or even Earth colonists left behind centuries ago. There are certainly other possibilities here as well. 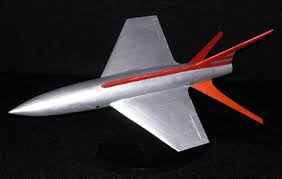 
Crew : 5
Hit Points :55
Armor Class: 6
Drive System -Ion Sublight Pulse Drive
Nuclear Fuel Drive sub system
This vessel was part of the United Nations program of exploration right after the introduction of pre warp technology in 2001. The pioneer class is one of the more useful classes of pre atomic warp capable vessels. It is used in exploration, asteroid mining, and deep solar system exploration. It is noted for using an Ion Sublight pulse engine and a nuclear fuel sub system making this one of the more stable of the Atomic Rocket series the Earth was producing at the time. This rocket ship is still being produced today for a wide variety of applications.

Like its companion movie Flight to Mars is really a blank canvas that you as a DM can paint with. The sky is really the limit here. For my post apocalyptic Mars game this movie really offered me an opportunity to go to town. 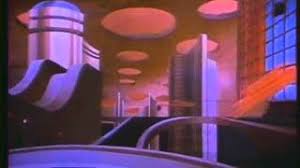 The underground city/redoubt was actually the ruins of a Krell outpost that connected with the Martian undergrounds of Burroughs. This was taken over by human colonists and red men descendants from the time of Earth's Imperial period on Mars. When relations broke down the nukes and worse started to fly.

There had been terraforming going on
and the planet was only 78 % to Earth standard when the atmosphere plants broke down completely.

The Earth itself has suffered during these "Atomic Wars" and are going back out to the colonies to reclaim what's rightfully theirs.
The 40s post WWII gear and space leathers from these films are great for a DM trying to create a retro futuristic campaign especially on Mars. Simply add your favorite Martian element and your ready to go.
This sort of campaign is perfect for X plorers, Mutant Future, or any number of science fantasy retroclones. This would also make a great intro game for something like Terminal Space as well.
For further options go over here and take a look at Rocket Ship X-M for more Martian thrills
Here
Posted by Needles at 8:38 AM