House of the Rising Sun (Arduin Grimoire volume 6) By Dave Hargrave has been one of those missing pieces of my Arduin Grimoire collection. Well, no more thanks to Emperor's Choice Miniatures & Gamers.
And this goes back to October when I found a copy of the contents of House of Rising Sun on The Ruins of Murkhill forums here. 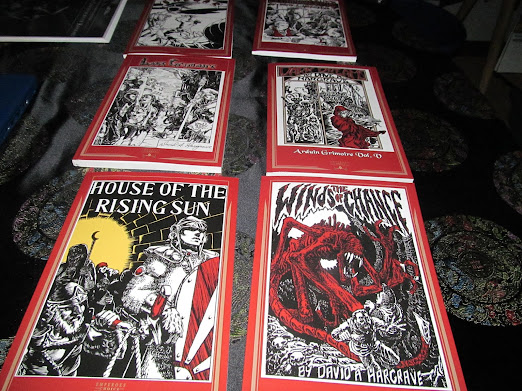 According to the poster oldskolgmr who posted a break down of the contents of the Dragon Tree Press version of the book;
"Arduin Grimoire Vol. VI; House of the Rising Sun  [Note all writing and spellings in the original except bracketed, italicized material, by the poster].By David A. HargraveCopyright 1986Illustrated by Roland BrownPublished by Dragon Tree PressSecond Edition 1988 Pg. 2           Foreward, Dedication, Undedication, and Special Thanks to Dragon Tree Press [Ben & Mary]

Pgs. 8 - 11  The Street Urchins of Arduin Pgs. 12 - 14 The Beggars Guild (And New Character Class?)Pg. 15         The Assassins of Arduin [general]Pg. 16         Arduin Law and Redress by Assassination Pgs. 17 - 20 Unique Weapons of Arduin AssassinsPgs. 21 - 23 Poisons of Arduinian AssassinsPgs. 24 - 25 Commercial Medicines of ArduinPgs. 26 - 28 Arduin FoodPgs. 28 - 29 And BeveragesPgs. 30 - 31 The Natural Denizens [animals/fauna] of ArduinPgs. 32 - 37 Arduinian Avians Pgs. 38 - 39 The Special Pets of ArduinPgs. 40 - 44 More Monsters of ArduinPgs. 45 - 46 New Magiks [mages]Pgs. 46 - 47 New Druidical MagikPgs. 47 - 48 New Priestly MagikPgs. 49 - 50 New Runesinger MagikPgs. 51 - 54 Dragon MagikPgs. 55 - 59 More Arduinian Alchemical GoodiesPgs. 59 - 60 Special Alchemist's Note, Alchemists Character Individualization ChartPgs. 61 - 65 More Orcish Alchemical MayhemPgs. 66 - 68 New Mystick Artifacts and Treasures Pgs. 69 - 70 Bardic Oddities of ArduinPgs. 71 - 73 Rare and Legendary Gems and JewelsPgs. 74 - 75 Old Legends of ArduinPgs. 76 - 83 The Old Gods [of continents five and three]Pgs. 84 - 88 The Noble Families of ArduinPg. 89         Super Heroes and Sword SwingersPg. 90         Final Note [from David A. Hargrave] and Abbreviations [used]      From the World of Arduin [advertisement for Arduin Grimoires published by Dragon Tree Press]More Arduin books by Grimoire Games [advertisement]From the World of Delos [advertisement, Dragon Tree Press publications not related to Arduin]"
There are two PC classes that have me intrigued,  'The Adventurer Class (A new character class)' & 'The Beggars Guild (And New Character Class?)'. Both of these classes are mostly two classes that form a hodgepodge of abilities for the player's PC . The adventurer class goes all of the way to level 100 and the beggar does as well.  The adventurer is a highly trained & dangerous profession with the PC starting training at age ten to fifteen years of age. The training is very serious. And the PC is something akin to a D&D rogue but far more of a tomb breaker. They have elements of assassins, courtesans, and alchemists. The adventurer class is a child of the urban environment and they compliment the beggar quite nicely. This is a rough & tumble class and its by invite only. Mostly human & Elven types go for the adventurer class. Proto  Adventurers  are taken away for training a minimum of seven years. 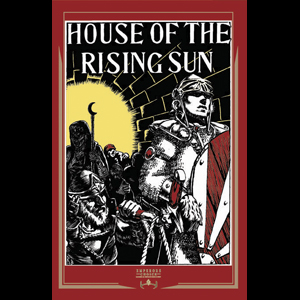 Beggars can be of any race, color, creed, etc. with any physical deformity and they go through a training course of three years. And they are one of the most respected guilds on Arduin because they are information brokers par excellence. And they have incredibly close ties to the Arduin Thieves Guilds. A beggar gets three thieves skills They are not real thieves per say. And gain levels as traders & they often have rats or creatures of the rodent variety as trained pets. Beggars eyes are everywhere on Arduin.
So what do these PC classes say about Arduin?! Well to me it says volumes about Arduin's urban underworld & how its cityscape is interconnected in with the criminal element.  'House of the Rising Sun' also contains 'The Street Urchins of Arduin' which has incredibly strong ties the beggar's guild within the cities. The PC's are incredibly wise to keep on the good side of these social & adventure element.
Adventurers are whole different level with life being an adventure as a part of their credo. And its very possible that there are any number of abandoned ruins, cities, & even urban  dungeons where & when their particular skills are needed. The adventurer's class strikes me as 'Laura Croft' years before a proper 'Laura Croft' game ever debuted and far less of an 'Indiana Jones' style adventurer. The adventurer speaks volumes of treasure seeker and far less of deadly thief of Advanced Dungeons & Dragons fame. That being said I can see these three PC & NPC  classes working very well together to form another pillar of the underworld that crosses over into certain circles of academia on Arduin.
'House of the Rising Sun (Arduin Grimoire Volume 6) Is Available Right Here...
Posted by Needles at 4:49 PM