Megapedes have been appearing across the American bread basket since 1948 & are believed to be a last ditch fifth column weapon created by the remaining Nazi post World War II. The megapedes rampage both corporate & civilian farms of all crops. These kaiju present a clear & present mutational hazard to all with whom they come in contact. 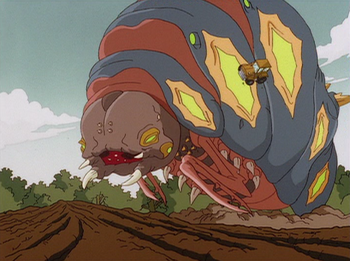 Megapedes have only one overwhelming desire, to consume as much organic material as they can inorder to evolve into their next highest life cycle stage 'the Cicada'. But the circumstance to create the evolved form is rare. Megapedes are fast, danger, & mostly still a rare species of kaiju. They originate within the inner Earth but have fast become a dangerous & highly wicked invasive kaiju species.
Many fifth columnist in 2021 have summoned the megapedes to the upperworld through a combination of sonics & scent markers for their targets. The megapedes are vast engine of destruction capable of wrecking havoc on those that cross their path during this phase of their evolution & biological cycle.


Appearing # 2d6 Megapede  5/10, Move 20m, Burrowing 40M,  Armor 4, Claw (melee 3d damage),  Bite (melee 4D damage),  Survival 2,  Combat 2,  Melee 1 . Gigantism,  Regeneration As Troll, Underground Dweller, Darkvision 30M, Armored Terror - the Megapede's armored body can withstand military grade hardware weaponry, Fast burrow - the Megapede  can burrow twice its burrowing rate up to three times a day, Change of The Season -the Megapede can morph into Cicada once it has consumed three times its body weight, Foaming Terror - In both forms, Megapede can produce a foam which can poison enemies if it remains in contact with their eyes doing 3 poison damage per round, Get the Point -  the Megapede possesses poison barbs that do 3 damage plus poison to the target