Diving deeper into the deep end of the history of original Dungeons & Dragons in issue #1 volume one of the Strategic Review from Spring of 1975.this issue marks the appearance of the Mind Flayer by  Several things become very evident and that's the fact that the Mind Flayer came into original Dungeons & Dragons fully formed. And the abomination was already a fully formed threat to any adventurers that it ran across. 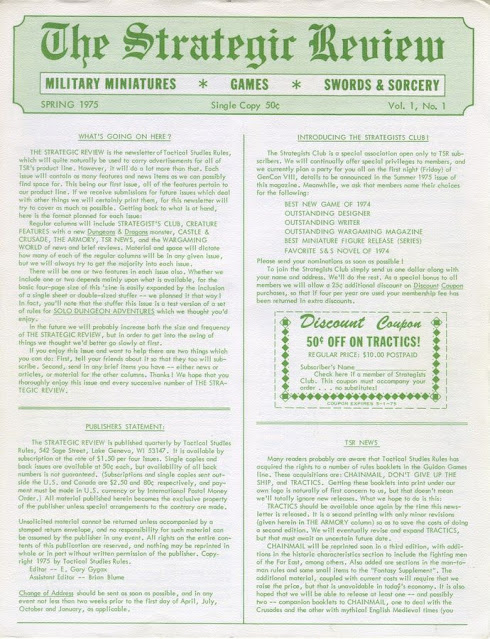 The original Mind Flayer was very dangerous & this is not a creature to be underestimated. If we look at it's stats then we get a far better understanding of its attacks, methods, and modes here's the original break down from 'Creature Features'  ; "CREATURE FEATURES The Mind Flayer: Number Appearing 1-4 Armor Class 5 This is a super-intelligent, man-shaped creature with four tentacles by its mouth which it uses to strike its prey. If a tentacle hits it will then penetrate to the brain, draw it forth, and the monster will devour it. Move 12 It will take one to four turns for the tentacle Hit Dice 8+3 to reach the brain, at which time the victim % in Lair 50% Treasure F Magical Resistance 90% is dead. A Mind Flayer will I flee if an encounter is going against it. Their major weapon, however, is the Mind Blast, a wave PSI force with a 6 directional range and a radius of 5’. All within the radius must save as indicated or will suffer the result shown: Mind Blast: IntelIigence  Saving Throw at Range Effect of of Opponent l-2 3-4 5-6 Mind Blast 3 - 4 19 19 17 Death 5-7 17 16 15 Coma, 3 days 8-10 15 14 13 Sleep, 1 hour 11-12 13 12 11 Stun, 3 turns 13-14 11 10 9 Confuse, 5 turns 15-16 9 8 7 Enrage, 7 turns 17 7 6 5 Feeblemind 18 5 4 3 Insanity, permanent Magic users add +1 to their saving throws, and clerics add +2. A Helm of Telepathy adds a +4 to saving throws, and when such saves are made the attacking Mind Flayer is stunned for 3 turns." 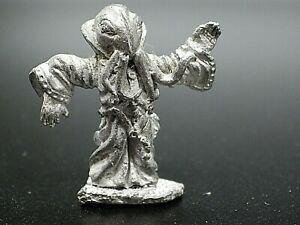 According to the illithids (commonly known as mind flayers) Wiki entry the Mind Flayer's played a significant role in original Dungeons & Dragons; "Mind flayers first appeared in the official newsletter of TSR Games, The Strategic Review #1, Spring 1975. Here, the mind flayer is described as "a super-intelligent, man-shaped creature with four tentacles by its mouth which it uses to strike its prey."[5] When it hits prey with a tentacle, the tentacle penetrates to the brain and draws it forth, allowing the monster to devour it. A mind flayer's major weapon is given as the Mind Blast, a 5-foot radius wave of "PSI force" which affects each opponent differently based on how intelligent it is; possible effects include permanent insanity, rage, confusion, coma, and death.[6] They were also included in the Eldritch Wizardry supplement,[7][8] for the original (white box) Dungeons & Dragons game (1976), wherein they are described as super-intelligent, man-shaped creatures of great (and lawful) evil, with tentacles that penetrate to the brain and draw it forth for food."

The point is that even in early original Dungeons & Dragons the mind flayer was a dungeon dweller with an agenda. These things could & did cause an incredible amount of problems for PC's.
The mind flayer in original Dungeons & Dragons is specifically on the the side of Law and in point of fact could be considered the inversion of normality & Law. The mind flayer represents an alien form of Lawfulness. This is clearly on point with the definition of 'Lawful Evil' from the outset; "lawful evil alignment was the methodical, intentional, and frequently successful devotion to a cruel organized system. "
And it's this successful devotion to a cruel organized system bit that tells us volumes about the mind flayers as a whole and as dungeon dwellers. These are simply some wandering monster these are monsters with agendas & that agenda is the expansion of  the mind flayer race, gain nourishment on human brains, and to expand their own dominion over the dungeon itself. 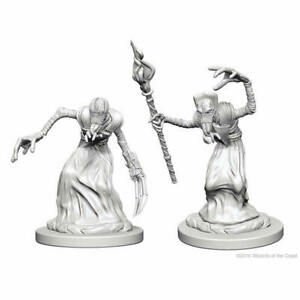 Mind Flayers  miniatures
- D&D Nolzur's Marvelous Miniatures
- Wizkids WZK72566
Mind Flayers in original Dungeons & Dragons were nasty threats from beyond the dungeons & these alien threats popped up in other places as well. The mind flayers appeared in Metamorphis Alpha first edition & The Empire of the Petal Throne rpg Thursday night special dungeon from my uncle. The mind flayer's agenda was always the same, mind devouring, reproduction, & the continuation of the mind flayer's holdings. In original Dungeons & Dragons the mind flayer was the threat that we hated to run into.
Posted by Needles at 8:27 PM