Giants of Chaos - Giant Chieftains, The Forces of Chaos, & B2 Keep on the Borderlands -ACK's Stormbringer Campaign 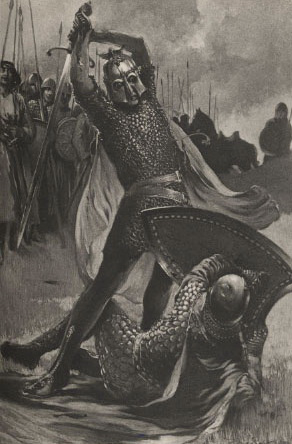 "...so King Arthur shook
And headlong flung Sir Accolon. Then took,
Tearing away, that scabbard from his side
And hurled it through the lists, that far and wide
Gulped in the battle breathless. Then, still wroth,
He seized Excalibur; and grasped of both
Wild hands, swung trenchant, and brought glittering down
On rising Accolon. Steel, bone and Brawn
That blow hewed through. Unsettled every sense.
Bathed in a world of blood, his limbs lay tense
A moment, then grew limp, relaxed in death."

Could the B2 The Keep on The Borderland By Gary Gygax have an Arthurian mythological reflection?!  I believe that the keep is near Bedegraine within the Arthurian legends & mythos. Bedegraine wiki entry goes deeper into where & why this important; "Bedegraine is a location featured in some tellings of the Arthurian legend. Its chief importance is as the site of a battle where King Arthur solidifies his reign in a victory over rebel kings.

Bedegraine is first mentioned in the French Prose Merlin, a work eventually incorporated into the Lancelot-Grail cycle.[1] The Merlin refers to Bedegraine as the chief city of Britain and Carmeliard, the kingdom of Guinevere and Leodegrance, and describes Arthur's victory over the rebels there.[1] Though his force is outnumbered by the rebels led by King Lot, Arthur carries the day with the secret aid of the French kings Ban and Bors. The rebel kings must retreat to their own territory to fend off Saxon invaders, and eventually recognize Arthur as their rightful overlord.[1] The Livre d'Artus, a continuation of the Merlin, also mentions Bedegraine and places it on the border between Logres and Cornwall.[1] " 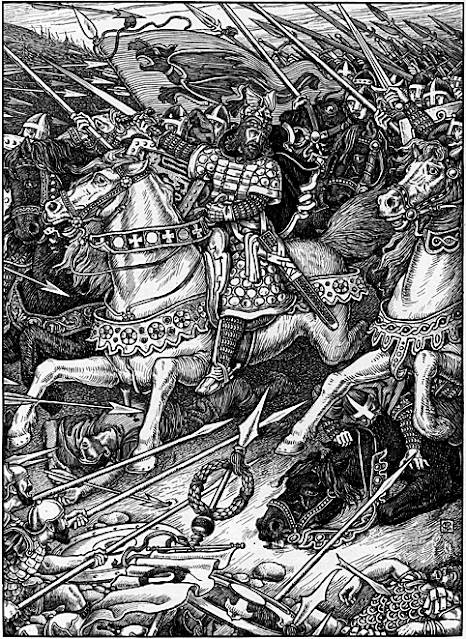 
"Bedegraine is an important location in the Vulgate Lancelot, another section of the Lancelot-Grail.[1] The city, here located on the border of Ireland and Carmelide, serves as one of Arthur's court cities, and becomes the setting of most of the "False Guinevere" episode, in which an impostor usurps the Queen's place and the real Guinevere must flee with Lancelot.[1] The Battle of Bedegraine episode is an important event in Thomas Malory's Le Morte D'Arthur, which describes Arthur's defeat of the eleven rebel kings as his final step towards undisputed kingship.[1] The 13th-century French writer Baudin Butor, who wrote on the legendary kings preceding Arthur, mentions Bedegraine as one of Vortigern's court cities"

If we get into one monster element that causes chaos within Arthurian myth & literature. And this element has to be the Welsh giants which were at the forefront of causing Camelot lots of destruction & dangerous. 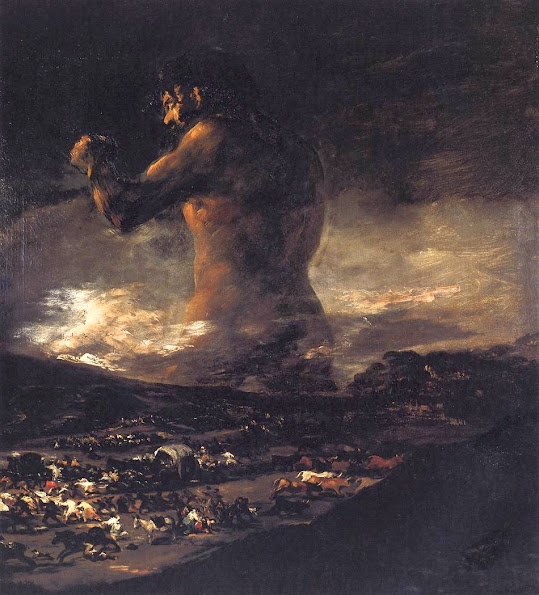 The Giant by the artist Goya

In the Welsh literature giants such as the following are very dangerous; "In the Mabinogi of Branwen ferch Llyr, Britain is ruled by the giant Bran the Blessed, who has never been able to fit inside any dwelling. In Culhwch and Olwen, giants feature as antagonists throughout. Ysbaddaden, chief of giants, is the father of Olwen, a beautiful maiden sought by Culhwch fab Cilydd, a cousin of King Arthur's. He is slain at the tale's close by his nephew Goreu fab Custennin,[2] while Wrnach, another giant, is killed by Cei."  And this is also  concerns Rhitta (or Rhudda) Gawr a very destructive giant; 'A well-known tale concerns Rhitta (or Rhudda) Gawr, a giant who held court in Snowdonia. He marched against warring kings Nyniaw and Peibaw, overwhelmed their armies and took their beards as trophies of his victory and fashioned them into a cap for himself. The twenty-six kings of Britain assembled their armies to destroy Rhitta but were vanquished by the giant, who cut off the kings' beards and fashioned a great cape out of them to protect him from the cold. Sometime later, as Arthur "washed his hands after slaying the red-eyed giant of Cernyw", he received a message from Rhitta, demanding his beard to patch his cloak. Arthur refused, and Rhitta marched south with his armies to claim it from him. In the resulting confrontation, Rhitta is forced to shear his own beard, and retreats "much humbled in stature but much wiser in knowledge". A variant tale claims that after receiving the demands, Arthur marched furiously up to Snowdonia and fought against the giant in a duel, in which he "lifted up his sword and struck Rhitta on the crown of the head a blow so fiercely-wounding, severely-venomous and sternly-smiting that it cut through all his head armour and his skin and his flesh and clove him in twain.",[3] According to the story, Arthur commands that a cairn be built over his body which forms Gwyddfa Rhudda (Rhita's Cairn). Over the intervening centuries the name of Rhudda was forgotten and Gwyddfa Rhudda became known as Yr Wyddfa."  These giant chieftains are going to be at the head of many of the armies of Chaos something that fits quite nicely with Adventurer, Conqueror, King rpg. Especially some of the articles that appeared in the AXIOMS ACK's house organ magazine. 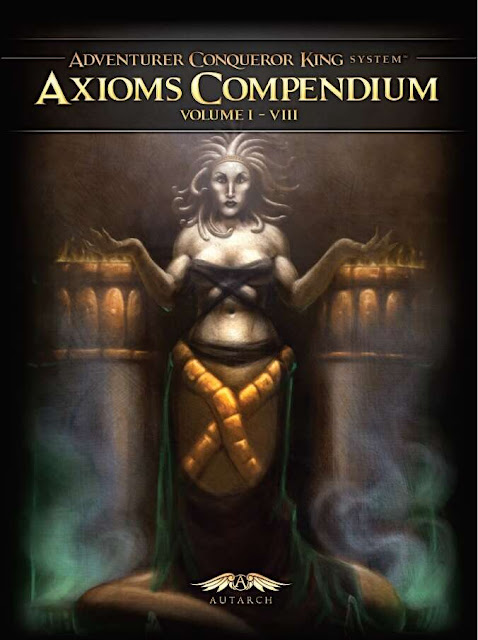 All of the above fits the Chaos of Chaos area found within B2 & it also fits the general adventure principles found within AX1: The Sinister Stone of Sakkara. And if we use B2 Keep on the Borderland as the campaign adventure basis then we have the fact that the Keep is on the outer edge of such a campaign. The Welsh Arthurian legends crossover into Michael Moorcock's Corum books & the fact that humanity as a whole in Athurian legend is barely hanging on. Both against against itself & the forces from Outside. B2 could be seen as one of the great pushes of Chaos against humanity. 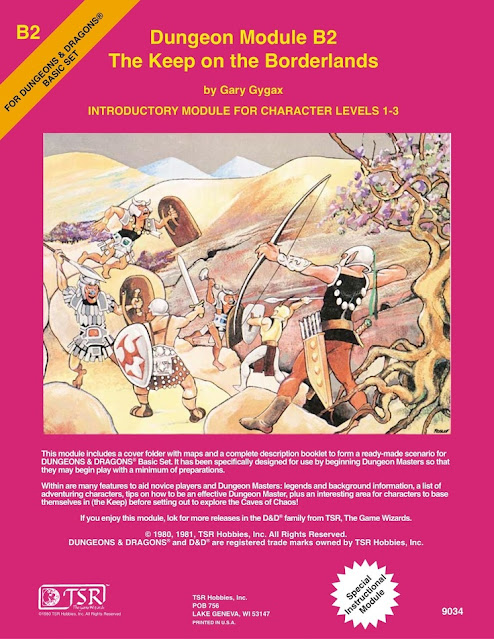 The chaos god thing that we see within AX1: The Sinister Stone of Sakkara reminds me of the Gygax's Tharizdun.  And this is where we see Robert Kuntz's article sited in the OSR Grimoire "The Dark God: Historical Content, Developer Commentary, and an Ode to the Dark God" by Robert J. Kuntz (El Raja Key's Magical Emporium #4, 2003), republished in "Dark Druids" by Robert J. Kuntz (2006, 2015). All of these chaos things are survivors from the first or second great Biblical flood that have survived into Arthurian times.
And Arthur is perhaps laying the ground work for humanity to move forward. The dark empire of Granbretan would love nothing more then to be able to examine these entities or harness their power.