"Dave Arneson decided to begin a medieval fantasy campaign game for his active Twin Cities club. From the map of the "land" of the "Great Kingdom" and environs -- the territory of the C & C Society -- Dave located a nice bog wherein to nest the weird enclave of "Blackmoor", a spot between the '''Great Kingdom" and the fearsome "Egg of Coot". Gary Gygax, Introduction to D&D, 1 November 1973


So it seems that after countless hours of writing & back breaking fan work 'The Hidden in the Shadows' blog is done with their fan project of 'The Weird Enclave of Blackmoor'. This is a fan project of placing & fleshing out of Dave Arneson's Blackmoor within the realm of Greyhawk according to the one hundred & two page project's introduction ; "This book presents an overview of Blackmoor for Greyhawk players; it's major places, people, and events. The goal of this book is to provide just enough detail for the Game Master to build adventure, while avoiding the mind-numbing text dumps too often found in sourcebooks. The information is not intended to be thorough or highly detailed, but sufficient to provide a Game Master with just what is needed to run a Blackmoor campaign grounded in tradition but allowing for creative freedom and imagination. It is a framework upon which many different styles of dress may be hung. It is system neutral, so it may be used with any ruleset, and it is adapted to the Greyhawk setting so that Greyhawk referees will have access to the wealth of Blackmoor material in a familiar and readily useable way." 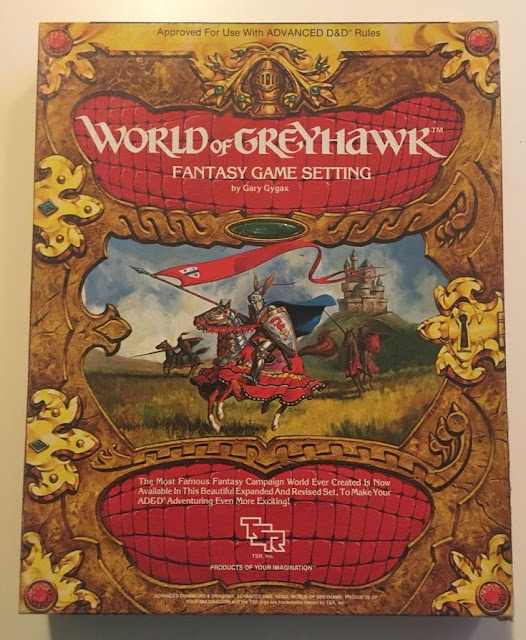 Boy I wish, that 'The Weird Enclave of Blackmoor' was available a couple of years ago when I was running ACK's players through a Sword & Sorcery version of Greyhawk?! The sourcebook does exactly what it says on the cover. It delivers a history of the Braunstein game, Arneson's Blackmoor history, Gary Gygax's part with Greyhawk, then delivers the goods with a full overview of the region that eventually was covered over in the Black Ice. This work is both a what if & what the Hell giving us a region steeped in conflict & chaos.
'The Weird Enclave of Blackmoor' takes the veil back on the region of Black Ice & then doubles down by giving a solid overview of the region, its NPC's, areas, major powers, and even how the technological devices of the 'City of the Gods' fits into the Greyhawk area.
But is it good?!
In a word?! Yes I believe it fits the bill nicely for a fan sourcebook that brings the Greyhawk region alive with a viable Blackmoor setting that could be added into or used as a viable campaign setting. The ideas here are fleshed out with history, hooks, NPC's & with places described. Take for example the classic Castle Blackmoor itself; "Castle Blackmoor Rising over fifty feet above the town, the black rock upon which Blackmoor Castle is built is an impressive geological edifice. On the lake side it is a sheer cliff, but on the town side it is a mix of steep rises and low cliffs with a single narrow road winding up the hill to the castle gatehouse on the eastern wall. In places here and there, cracks and fissures in the rock ooze an oily black tar. The rock has a dull sheen and will glisten in bright light, but curiously seems to drink light in at the same time - perhaps due to a high lead content. It is magical in nature, but drawing on that power requires years of study. Many a magic-user has found the rock to be more of a hindrance than help to divination spells being unable to penetrate the stuff." You get the idea that 'The Weird Enclave of Blackmoor' was both love letter & source book for its author.
But the fact that 'The Weird Enclave of Blackmoor'  ties directly into The Greyhawk box set & campaign setting is the icing on the OSR cake. 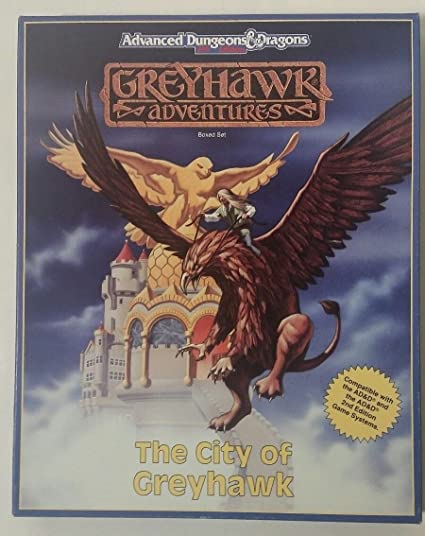