Leviticus 18:21: “And thou shalt not let any of thy seed pass through the fire to Molech, neither shalt thou profane the name of they God: I am the LORD.” 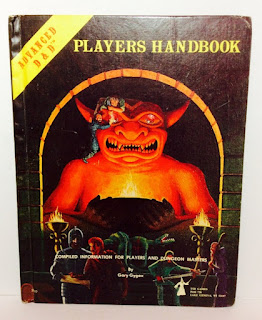 If there's one dark lord of Law its got to be Moloch. This is one 'god' whose been there right in front of the original Dungeons & Dragons crowd going all of the way back to the beginning of Advanced Dungeons & Dragons. He's been a devil going back to the beginning of the Monster Manual II preview in Dragon magazine issue #75. His Advanced Dungeons & Dragons stats are nasty; "MOLOCH (Arch-devil) FREQUENCY: Unique (Very rare) NO. APPEARING: 1 ARMOR CLASS: -3 MOVE: 12 HIT DICE: 126 hit points % IN LAIR: 95% TREASURE TYPE: I, R, S, T, X NO. OF ATTACKS: 3 DAMAGE/ATTACK: 8-11/8-11/4-16 SPECIAL ATTACKS: See below SPECIAL DEFENSES: See below MAGIC RESISTANCE: 70% INTELLIGENCE: Exceptional ALIGNMENT: Lawful Evil SIZE: L (14½" tall) PSIONIC ABILITY: 226 Attack/Defense Modes: All/all
Moloch is a Grand Duke, Viceroy of Baalzebul, and the lord of the Sixth Plane of the hells. He is as strong as a hill giant, and he attacks by grabbing and crushing or piercing a victim with his huge hands and taloned fingers, followed by the bite of his shark-toothed maw. Moloch carries, and at times may choose to employ, a six-tailed whip made of an unknown, pliable metal. This device delivers either 1, 2, or 4 points of damage per tail striking, depending on the number of charges he expends. The damage from this whip is electrical in nature, and so is greatly feared by less powerful devils.
Once per turn or melee round, as applicable, Moloch can, at will, use the following spell-like powers: affect normal fires, animate dead, beguile, burning hands (16 points of damage), detect invisibility, detect magic, fire charm, fly, geas, illusion, know alignment, polymorph self, produce fire, produce flame, pyrotechnics, raise dead, read languages, read magic, suggestion, teleport (no error), wall of fire, and (fulfill another"s limited) wish. Once per day Moloch is able to create a flame strike, use a symbol of stunning, and pronounce an unholy word. When Moloch chooses, he may breathe upon an individual, or up to 9 persons within 30". Those who fail a saving throw vs. breath weapon will be affected by fear such that they will drop their weapons and flee. Moloch can summon 1-3 horned devils (with an 80% chance of success).Great enmity exists between Moloch and Geryon. If it were not for Baalzebul, there would be open warfare between the two, much to Moloch's detriment and Mephistopheles's delight.
Description: Moloch is a great, square bodied creature with red-orange skin. He has short, thick arms and legs, and huge, square hands and feet. His feet and head are horned. His head is huge with slanting eyes and a gaping mouth."
Moeloch has been there since the beginning & clearly one of the most dangerous arch devils possibly to have active cults in a campaign. Why is this 'god' of Law so reviled?! Well according to the 'All Things Interesting' site article 'Meet Moloch' ;"Moloch’s name derives from the Hebrew word mlk, which usually stands for melek, or “king.” As this is vocalized as molek in the Masoretic text — the authoritative text for Rabbinic Judaism — the pronunciation has become its traditional name.

The Masoretic text dates to the Middle Ages but references to a Molock appear in Ancient Greek translations of old Judaic texts as well. The distinction dates back to the Second Temple period between 516 B.C. and 70 C.E. — when the Second Temple of Jerusalem stood prior to its destruction by the Romans.

Moloch’s anthropomorphized bull figure was typically pictured in Rabbinic Judaic texts as a bronze statue internally heated by a fire. It was inside this construct that priests or parents placed their children to be consumed by fire as a sacrificial offering." "

So basically the part of adventurers on the front cover of 'The Advanced Dungeons & Dragons Player's Handbook' are breaking into & stealing from  a temple of Moeloch. And personally I don't see a problem with this. The arch devil most likely would hold power in arid lands in need of rain, & other favorable conditions. But his price for such conditions is beyond steep. 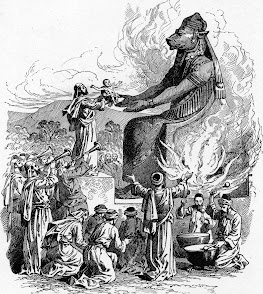 Such cults of Law would be almost unknown in many worlds. But his agents would be more then able to spread his gospel to impoverished lands.
But there's more going below the surface then simply child sacrifice. Not that its not enough of a black deed beyond the pale of sanity.

Moloch's agents often offer he offered knowledge of the multiverse, the stars, & other weather related phenomena along with favorable conditions for farming, animal herding, etc. in exchange for his worshiper's souls. But this isn't enough. There has to be the dark deed of child sacrifice as well. Why!? Because Moloch represents the dark side of Law the ever consuming arrow. And with such sacrifices there's also the accumulation of wealth as the god's greed knows no bounds. 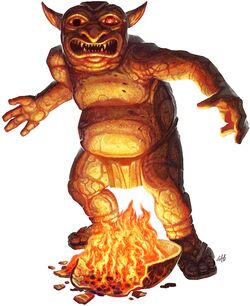 Moloch is reviled even among other devils & yet his cult still exists. Even in modern horror game settings the god's agents & clerics sew the seeds of murder & forbidden knowledge. Moloch offers knowledge of the multiverse through his lesser devil servants in exchange for more & more murderous deeds. Time & again there have been covens that have been uncovered by heroes who have thwarted the murderous intent of Moloch's cults.
An eyeless eidolon awakened by thieves.

Moloch in the modern age is a murderous god whose perfectly suited to the bloody handed 21 century offering promises of wealth, stability, fruitfulness, money, & dark knowledge in exchange for the old dangerous practices. His status & even smaller idols exist on the antiques black market some even dating back to the time of Atlantis. Where even those ancient priests & magi of the arcane condemned the bull headed devil god's dark magick practices of the darkest evil.
Posted by Needles at 12:10 PM