Sometimes one has to wait for a Kickstarter to end then wait a month for the supplement to get published to really access the full weight of its impact on the market place. Not so with the classics & in this case Frank Mentzer's Immortals box set has been playing with my mind. And here's the line that's been doing it;"The Player's Guide to Immortals lays out the basic information needed to convert you mortal player characters to Immortal status. It also explains new game mechanics, as are many aspects of the character's new existence" 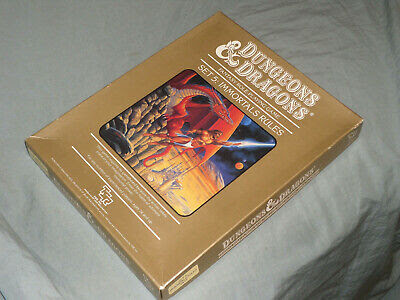 Are immortals divine powered up agents of their respective immortal superiors  & spheres?! If the  god Freyr is the actual progenic ruler of  the Ljósálfar ('Light Elves') does this mean that  the gods of the elves of Dungeons & Dragons & even Advanced Dungeons & Dragons are to share his fate again & again? The Archons only know. Like I said before Frank Mentzer doesn't get half the credit he deserves. The light elves power gets watered down generation after generation over tens of thousands of years. Why?! Because Freyer & the like are actually of the rank of Archons & here's the description from the immorals set; "These Lawful champions of goodness are sworn enemies of Chaos. They are native to the Home Plane of the Hierarch of Energy. Their full description is given in the D&D Master Set (MDM page 40). They are entirely mortal. In the opinion of the Hierarch (who has little experience in working with the substance of the other Spheres), his creations are shining examples of the perfect blend of beauty and power. Few other Immortals agree, but those of his Sphere dare not voice their opinions. Archons have very narrow views of what is acceptable behavior. They are so outraged by any neutral, chaotic, or evil behavior that they are avoided by all other creatures. Despite their good intentions, they manage to arouse resentment in nearly everyone they meet. And they are multiversally considered to be the most obnoxious creatures in all the Home Planes."
The Hierarchs are exactly the sort of mortal gods & goddesses that the Stormbringer entity was designed to hunt, kill, & absorb.. That's right its sort of cosmic Jack in the Green.

Swords like Stormbringer & Mournblade are very dangerous in the extreme & they are a part of an entity that's been stalking the backdrop of popculture for ages;
"Various books refer to this malicious entity as a demon, the anti-balance, and Sword. It is a treacherous being, chaotic evil to the core, that hungers for blood and souls and wishes to defy and destroy humanity and the Cosmic Balance. As a consequence of its influence, Stormbringer caused every Nihrain who handled it to become mass murderers. A court was assembled in the Nihrainian stables to put Stormbringer and its handlers on trial. But Stormbringer caused the judges to go mad and sentence both court and defendants to a terrible death. In the end, only ten Nihrain remained, including Sepiriz."

What are these entities?! The Stormbringer entity is a part of the antibalance & the sword. This entity isn't Law or Chaos but a part of the entropic end of all things. All it wants is violence, blood, & souls. By proxy the Lords of Chaos & Law get a piece of the occult action. 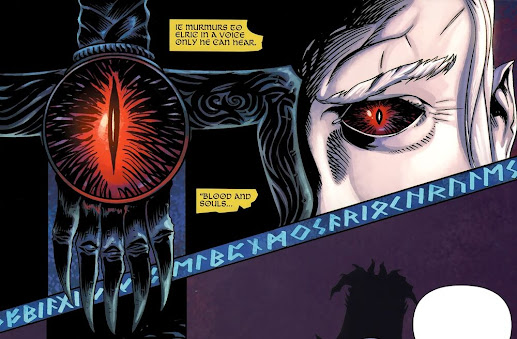 Surely this has nothing whatsoever to do with the Elves?! What if the sword has been in the mythology of the German & Norse this whole time? What if Stormbringer is actually the mystic sword Tyrfing, Tirfing or Tyrving; "Tyrfing, Tirfing or Tyrving (The name is of uncertain origin, possibly connected to the Terwingi) was a magic sword in Norse mythology, which features in the Tyrfing Cycle, which includes a poem from the Poetic Edda called Hervararkviða, and the Hervarar saga. The name is also used in the saga to denote the Goths. The form Tervingi was actually recorded by Roman sources in the 4th century.

Svafrlami was the king of Gardariki, and Odin's grandson. He managed to trap the dwarves Dvalinn and Durinn when they had left the rock where they dwelt. Then he forced them to forge a sword with a golden hilt that would never miss a stroke, would never rust and would cut through stone and iron as easily as through clothes.

Gleamed like fire or a black fire? Where have we seen this before?!

You know who else wields a sword like Tyrfing?!  Freyr whose divine connection to the primorial & elemental titans makes him perfect god pray for the Stormbringer entity. And he's doomed to be killed by Surtur at the end of  Ragnarok. Freyr is or was fated to give up his sword. A metaphor for the fate of the Elven people over & over again in the cycle of the planes?! 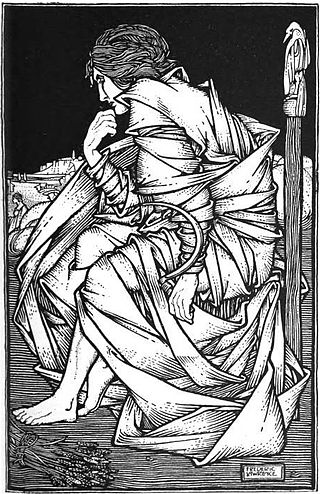 Seated on Odin's throne Hliðskjálf,
the god Freyr sits in contemplation in an illustration
(1908) by Frederic Lawrence
Elves may be better then you at everything but it seems that they are fated to the harvest of cosmos cut down by the cosmic sickle in a never ending cycle. This is also part of lord elves role; "Freyr (Old Norse: Lord), sometimes anglicized as Frey, is a widely attested god in Norse mythology, associated with sacral kingship, virility, peace and prosperity, with sunshine and fair weather, and with good harvest." Hence the lord of the light elves himself is fufilling a cosmic role destined to him in long ages past.
And this puts me in line with thinking that perhaps the 'old gods', the 'forgotten' gods, are not as gone as they seem. A thought that seems in line with both Freyr & Zzarchov Kowolski's Pale Lady Lamentations of the Flame Princess rpg.  adventure. The idea that perhaps the witch in the forrest had another role eons ago. Now she's removed from the games of Law, Chaos, & Fey. The Fey whose role as forgotten angels or worse has been forgotten by long dead worshipers. 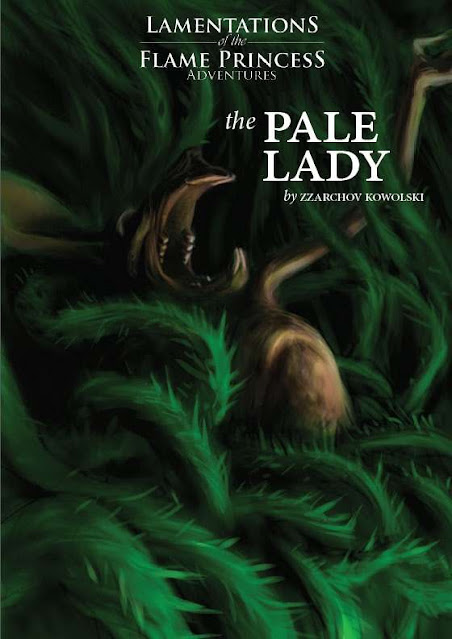 This is why the champions of Law & Chaos are never welcomed into Mystara or even into Greyhawk per say. The immortals on the highest inner levels of the councils of immortals within the inner circles know this relationship. But even Greyhawk has its own strains of the Stormbringer entity.
Elves basically have been seeded across the multiverse for the purpose of harvesting for the cosmic bounty by their very god & lord who himself is 'doomed'. We'll get into the why coming up.