"Five centuries ago, Modron was a thriving port city whose inhabitants worshipped Modron, the Goddess of Rivers and Proteus, the Shepherd of Neptune. Legends tell of the huge merchant vessels from far off Karakan and the incredible wealth brought by traders from the Isle of the Blest for pearls and dwarven artifacts. The mermen of Crespar stopped trading sponges and pearls, yet the port's wealth increased. Then, a huge migration of Orcs stopped the flow of dwarven merchandise and the far travelers no longer docked at Modron. In less than 50 years, the once flourishing area lost most of its population and the followers of the god and goddess blamed each-other's deity for the loss. Civil strife erupted and the temple of Proteus was submerged in the holocaust. The death blow was delivered by raiders in longships which carried off the few women and men into slavery. The survivors fled when or& scavengers moved into the ruins for a final pillage, hefting tons of marble. The Temple of Modron, being underground, was left unscathed and the Mermen renewed their vows to the Goddess of the Rivers. 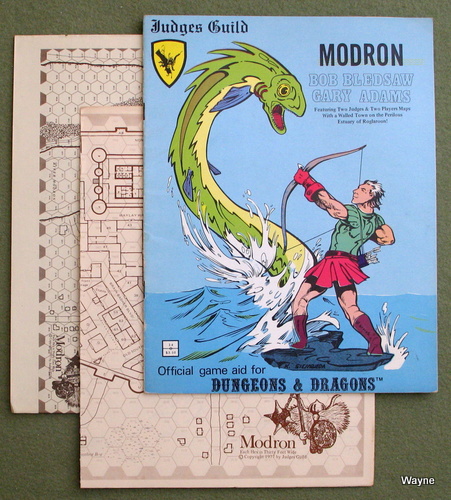 With funds from the City State, a new town was founded on the ruins of the old, to protect the Overlord's merchant ships fro- river pirates. 'Maelstron', a giant sea snake, with an allegiance to the City State, protected the builders. The original name was retained because it equated with magnificent warships and high-wizards in songs of the bards..."

So as per usual last night I was zipping around Wayne's book site & doing a bit of research when it comes to Judges Guild Wilderlands of High Fantasy section.
Now looking deeper into the Judges Guild  Wilderlands of High Fantasy, I began to notice Modron. Modron was a module that came out in '77.Modron is a product from Judges Guild for the Wilderlands. It was published in 1977 and was written by Bob Bledsaw and Gary Adams.  And the module has an interesting flavor. Modron is someplace between a war time  boom town, a fishing village, & a salvage  crawl.  The Bundle of Holding For Astonishing Swordmen & Sorcerers of Hyperborea kicked off a run of Sword & Sorcery nostalgia at our table top.  Now what if the events of Modron kicked off something far more sinister. 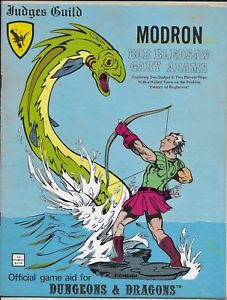 So the what if the adventure events of Modron kicked up a hornet's nest of Lovecraftian proportions. Modron's location is the key here & its 'Goddess' might be far more & less then she seems. Now we've talked about running the Wilderlands with Astonishing Swordsmen & Sorcerers of Hyperborea rpg. Now the events of Modron come off without a hitch for our PC's.  Modron is built on a site that is scared to three peoples, the humans, the Formorians, & the Deep Ones. Wait, what?!  The PC's messing around with the recovery of the treasure in Modron have disturbed something very dangerous. A shrine sacred to ancient peoples best left alone.
"Until about three years ago, the peculiar town of Port Greely was renowned as a prolific exporter of crustaceans. Then the Greely lobstermen severed all ties with outside partners. Subsequent attempts at renegotiation were shunned." This is the opening for 'The Mystery At Port Greely' for AS&SH. What if the messing around at the undersea ruins of Modron kicks off the events of the 'The Mystery At Port Greely'.
Why?! Because Modron was once the center of worship for the Formorians, the Deep Ones, & their human subjects. The Deep Ones have continued to make pilgrimages across worlds to their once sacred site. But now with the PC's having disturbed the ruins the compact between peoples has been broken! This kicks off the second ark of 'The Mystery At Port Greely' ; 'More recently, a small group of Fishmongers’ Guild representatives from the City-State of Khromarium has gone missing in Port Greely, and answers have been less than forthcoming. At present, the Guild seeks answers. It wants to know what became of its representatives, and it wishes to re-establish its lucrative partnership with the Port Greely lobstermen.' 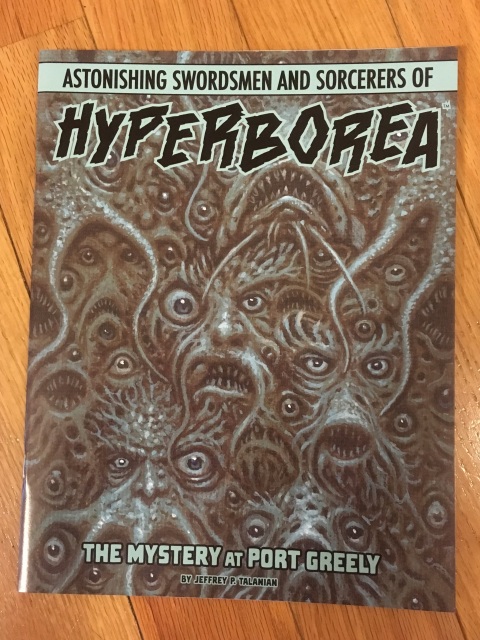 But what does any of this have to do with the Formorians?! The Formorians have deep links to Irish mythology & within several places have been cited as a part of the origin of the Sea Elves of AD&D's origins.  According to Wiki; "
The Fomorians (Old Irish: Fomóire, Modern Irish: Fomhóraigh or Fomhóire)[1] are a supernatural race in Irish mythology. They are often portrayed as hostile and monstrous beings who come from under the sea or the earth. Later, they were portrayed as giants and sea raiders. They are enemies of Ireland's first settlers and opponents of the Tuatha Dé Danann,[2] the other supernatural race in Irish mythology. However, their relationship with the Tuath Dé is complex; some of their members intermarry and have children. The Fomorians have thus been likened to the jötnar of Norse mythology.

The Fomorians seem to have been gods who represent the harmful or destructive powers of nature; personifications of chaos, darkness, death, blight and drought.[3][4][5] The Tuath Dé, in contrast, seem to represent the gods of growth and civilization" Within my uncle's Wilderlands of High Fantasy campaign the Formorians were a part of the branch of deep ones through a hated strain of sea giant. 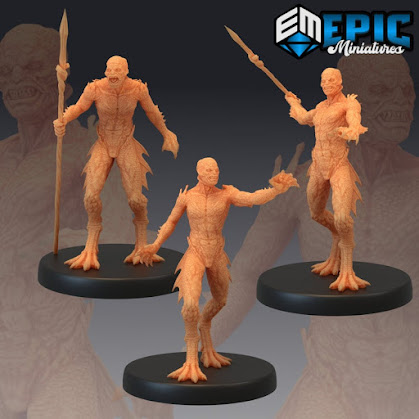 Deep One Minis available here.
So not only do you have the strains of war happening on two worlds but the PC's have to navigate through two very dangerous adventures to bring two worlds to peace.
Posted by Needles at 10:14 AM