Post Apocalyptic gaming kicks ass and I haven't been doing enough of it. I've spent the weekend thinking about my perfect PA campaign. The setting would have to be off beat and high weirdness. This thought exercise started with Tim "Sniderman" 's Master List Of Available Mutant Future Products

I stared at that list for hours and went on line to speak with my friend Dave from Fishwife games. He's a bit of a lore master of things PA. He's been designing some of the best system less PA  products for over a year now. Stuff like this.

I've been itching to use the Meat Lover's Guide To The Post Apocalypse in a PA setting. The question is what setting?  There are metric ton of worlds out there and I'm not going to use a single one of them.

PA games are supposed to kick ass and take names but part of the fun is figuring out the background, technology level, etc. of a PA community. one of the best sources for this sort of thing is the Lindsay's Technical Manuals.  According to conversations with Dave again.

"Seriously, since you have a blog and I don't.... you really need to do a follow up on the remaining suppliers of Lindsay's Technical Books... they are pretty much the answer to everything post apocalypse."

Want to know how that little girl in Thundarr got that locomotive working? Probably with the above book. Sadly, the folks who were putting these out have since retired.
How do you think all of those weird artifacts seem to crop up that weren't manufactured before the great disaster came from?
You can find them HERE 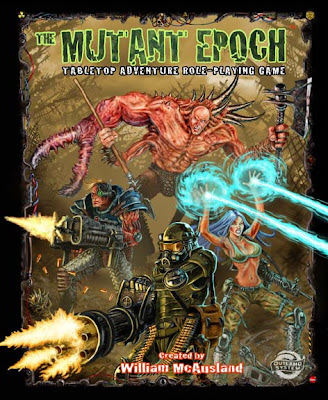 There are two really well done rule sets. Set one is Mutant Future which has this going for it. "The game is almost entirely open game content, and a free trademark license allows anyone to publish materials compatible with Mutant Future." For me that's a huge plus.

Bottom line you can get the game art free right over HERE
Then there is choose number two which Bill from Green Skeleton Gaming Guild turned me on to. According to the review on Rpg net
"The Mutant Epoch table top RPG (hereafter referred to as ME) is a 246 page post-apocalyptic game by Outland Arts, and specifically by William McAusland. And it’s surprisingly good for being the result of one lone person’s post gonzo atomic gaming output. It’s also a dense tome of game and art, so strap yourself in while I try to do it all justice".  You can read the whole review HERE
I've recently renewed my ties with Mutant Epoch and took a look at the metric ton of support that they have for the game.
The truth is that because of the way both games are set up its quite easy to switch between the systems if. A. Your inclined to do so and B. You need even more support for your PA gaming habit.

I like to take a Chinese Menu approach to my gaming. Choosing from rules set A and rules set B. As well as mix in a whole bunch of other stuff. However lets not forget who got us here. Metamorphosis Alpha by James Ward is another option and works very well with both systems.

You can still order the original grand daddy of em all right over HERE
If you want to take the time to do a conversion of the games  Mr. Ward is a genius when it comes to design and encounters. I learned a lot from seeing his style in recent modules as well. But what I'm really itching to run is :

This product contains everything found in the classic edition by James M. Ward and Christopher Clark plus a few extras not found in the standard edition.
* 20 full pages of additional gadgets and encounters
* a title to the actual station suitable for framing - you own it!
* a complete copy of the book as pdf on CD-Rom


There are only 50 of these bad boys on the market and I'm saving my pennies. Find out more right HERE Wait why I'm I telling you about this? Because it will be mine!
James Ward needs his due when it comes to post apocalytic new and old school gaming. Seriously the guy invented the genre and continues to crank out some of the best adventures on the market.

If your a reader of this blog then you know back in the 90's, I was devouring the Outlanders books. Dark Goddess is prettty typical of the genre.

Here's the plot according to good reads:

A doom vector Humanity's past lies buried beneath the ruins of near annihilation, concealed by a secret entity and its ancient blueprint to enslave mankind. But at the dawn of a far more treacherous new battle for domination, the war between humanity and its alien puppeteers is forged by a group of determined rebels whose forbidden knowledge of their inhuman enemy only begins to prepare them for what lies ahead....

grim footfall
In her chrysalis state, Baroness Beausoleil was a betrayer, a murderer, an arch foe of mankind. Now, her metamorphosis into Overlord Lilitu poses a far greater menace. But she needs human help in a plot to overthrow her brethren and seize control of the last remaining Anunnaki stronghold on Earth. Buried deep in the sands of the Sinai, a secret port can unleash the dangerous mysteries of an alien race--unless the Cerberus rebels can outwit a she-god with an army at her disposal...and the cunning and cruelty to wrest Earth for herself.

So why mention Ellis again? To rip off Outlanders? No not at all. See its like this. Mark Ellis is very good at creating setting, atmosphere, characters, etc. His latest book should be a solid blue print to all dungeon masters. Check it:

The plot:
The Spur: Loki’s Rock. The colony world in the Orion Spur known as Loki wasn't so much lost as forgotten. In the 188 years since a world-wide catastrophe destroyed what passed for civilization there, Loki had become a savage wilderness of strange cultures, as well as being the sanctuary for every bizarre cult, mad sect and outlawed scientific discipline in the Sol 9 Commonwealth. Quentin Crockett, a Colonel in the department of OffWorld Operations leads a team of specialists to Loki to monitor, catalog, and if necessary, eliminate the myriad societies that sprang up in the wake of the global cataclysm. In their armored ACP Ambler, the team travels Loki, searching for the lost Terran Enclave, while fighting off not only wild beasts, and the wilder natives but also the ruthless schemes of a mastermind about whom they know practically nothing. In The Spur: Loki’s Rock, Crockett and his team contend with the bizarre native fauna, but also with resurrected Nazi supermen, flocks of flying piranha, and the denizens of the kill-crazy town of Loki’s Rock, led by the psychotic Django Bonner and his bloodthirsty hench-wench, Pagan.
Buy it over HERE
Lets see about that blue print for PA grind house style excitement: Right bizarre planet, weird life forms, dangerous western style action. And more blood then you can shake a .40 watt plasma laser in the terra watt phase.
Conclusion And Aftermath

I'm going to write my own game setting bottom line and its going to be different then anything that's currently on the market. All of the above is balls to the walls blue prints to me. There are options to be sure but the bottom line is that this going to be old school.
Very sorry to anyone mentioned in the article about violating your copyright or trademark. That's not the intention and this is merely a piece of fan work.  More to come folks.
Posted by Needles at 12:40 PM