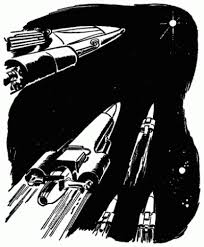 Tonight 's Game found the party accused of Treason by the Icewalker clan and being escorted back to the star base by two Irwin Clan frigates to present evidence.
The party had tangled with Mucloid mercenaries last game and was presenting evidence of the Icewalker's duplicitous nature.
Events seemed to come down as the party was met by bounty hunter guild members outside of the airlock. Their accusers wanted the party in lock down but the guild wasn't ready for that.

The trial is set for three stellar cycles from tonight's game to give the party time to prepare arguments. Trial by combat was an option. The party chose trial by counsel. Several alien races are greatly amused by the turn of events and are selling holographic entertainment rights.
The party is under armed guard protection at the moment.
Meanwhile the fleet has engage Apex Forces outside in the chasm.
Several different ships have docked at the station including:

The party's lawyer is preparing arguments and moving forward  with evidence collected in the Chasm of the Icewalker Clan's treachery and down right craven behavior. They're dishonor and actions continue but who is behind this group?
To Be Continued this Thursday!