“The most merciful thing in the world, I think, is the inability of the human mind to correlate all its contents. We live on a placid island of ignorance in the midst of black seas of the infinity, and it was not meant that we should voyage far.”
― H.P. Lovecraft, The Call of Cthulhu and Other Weird Stories
Introduction
They have come from beyond time and space. Carved from the most mythical crystlized dreams of gods from around dead stars. The skulls are object of the greatest mythic importance passed on from generation to generation of wanderers across the skies and planes.
These psychic keys of ancient wisdom allow their owners to open the doors of perception, the gates of the universe, and expand the mind's eye to reveal hidden pools  of untapped ancient knowledge and forbidden wisdom.

Using The Crystal Skull Configurations Within Your OSR Game

These skulls have been the focus for ancient temples, psychic resources beyond time and space. And some of the greatest magic items to come from the hand of their ancient creators. Some say they have been carved by the force blades of Atlantis, the hands of the space brothers themselves, or even the Lords of Stability and Law.


Each one is unique and has an almost malevolent personality fragment  Staring into the eye sockets for more then 3 turns will reveal wild visions of the past and alternative timelines within a four mile radius.
Each skull will act as a gem of true seeing in the hands of any intelligent being and reveal illusions for what they are. There are rumors of other skulls being psychically charged crystal balls cut from the crystallized tears of the gods. Some skulls wander the planes acting as the focus for certain important events and the object of some forgotten god or deity.
Once per day each skull may open a dimensional door or act as psychic key focusing the powers of the owner. The skull will grant minor telekinesis or telepathic abilities upon its owner.
Once per month each skull has a 30% chance of granting its owner a prophetic dream.
Any cure light wounds spell cast through the skull may grant an additional 1d4 points  of damage healed. The power of the pseudo -psychic crystal  matrices acting as a lens for the power of the wizard or cleric using it.
Skulls may be found throughout the infra - dimensional spaces of the planes and in dungeons across the Uberverse and beyond. 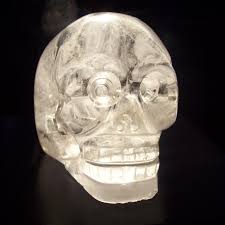