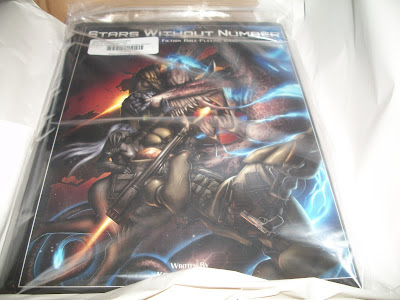 Treason Of The Space Vikings Part III
The game has been a two day affair and only now can tell what went down. The PC's were confronted with charges that ran from interference with a space beckon to destruction of Ice Walker clan property to the deaths of several VIP's.
The Bounty Hunter's guild brought them before a counsel of guild brothers for judgement and the PC's computer jockey got right to work right away presenting evidence.
The counsels went back and forth for nearly four hours of game time (actually about three minutes real time). The Ice Walker's sooth sayer gave a accusations and PC's made counter accusations.
Several secrets were revealed.

The PC's received several key pieces of evidence that enables them to take part in a Viking raid upon the Ice Walker's hidden base!
The PC's also engaged the several Ice Walker warriors throughout the station as their treachery was revealed. They tried to blow up the station to cover their escape. They were less then successful. Several key chiefs were injured or killed in the escape attempt.
The PC's were able to get their hands on a working Ice Clan stealth package and pod. It can be used for a limited amount of time. It will be vary useful in the raid. The PC did however suffer some injuries during the melee.
To be continued Monday
Posted by Needles at 9:23 PM