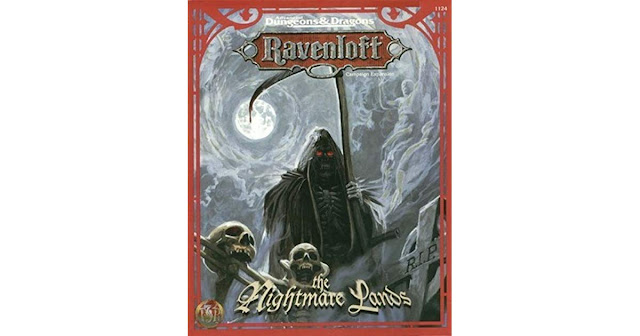 Beware the night, for sleep provides another path to the Demiplane of Dread. In the unique domain called the Nightmare Lands, darkness offers not blissful but ultimate terror. Heroes enter this realm at the bidding of the night, drawn from their dreaming bodies and captured by an enigmatic figure known only as the Nightmare Man. Trapped in this region of psychological fear, heroes face their worst nightmare in strange, surrealistic terrain. If they escape the treacherous clutches of dark slumber, they'll be safe - at least until the next time sleep overtakes them..."

There was a time in '95 when I grabbed just about everything with the word  'Ravenloft' in the title except this box set was worth it. 'The Nightmare Lands, by Shane Lacy Hensley with Bill Slavicsek, is a boxed set for the Ravenloft line. It was published in October 1995, just in time for Halloween.' The box set had everything I needed to set games in the other reality of dreams in Ravenloft. Dreams in Ravenloft are dark, forbidding, & can easily get PC's killed in little order & this box set was the first time that dreams got rules. 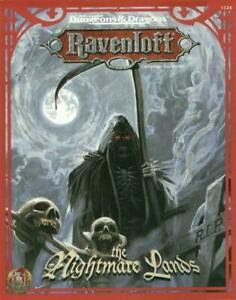 In the box set was a complete package of second edition Advanced Dungeons & Dragons goodness:
"The Nightmare Lands feels like a hybrid of the two previous boxed sets because it contains rules, a setting, and adventures. They're spread out across poster maps and a set of four different books:

"The Nightmare Lands" offered a whole cloth realm ruled over by a brand new Dark Lord & followed in its wake a dream realm something akin to both Fraud & Poe mixed with the nasitness of the Ethreal. Ravenloft is in full effect here allowing the dungeon master to run & rule their game settings with all of the dreamy goodness of the second edition AD&D setting. There's a light in the darkness in the form  Dr. Illhousen's sanitarium here, & his battle against the Nightmare Lands. The 'Nightmare Court' is almost fully detailed & the Dream Spawn is presented for the first time. They would come into full effect in White Wolf's Denizens of Darkness (2002) and Denizens of Dread (2004).

We get lots of insight into the monster NPC's of the Nightmare Court & then we get lots of connections into the dream worlds of Planescapes & other 2nd Advanced Dungeons & Dragons products & settings. But here's the weird thing, 'The Nighmarelands' set is the only time that we really see this Ravenloft setting ideal.  Later on many of the setting conceits of the dreamscape as adventure location would appear in the "Something Wild" (1996) adventure  which used the idea of dreamscapes in the Planescape setting.
Are there problems with the "The Nightmare Lands"? Only some of the usual 2nd Eiditon Advanced Dungeons & Dragons campaign setting issues & problems:
So many people might think that I loath 'The Nighmarelands' box set & nothing could be further from the truth. The box set is up to the high standards of the classic 2nd AD&D edition era. My main issue with many of the 2nd edition campaign box sets is that these settings were self contained, they had issues with campaign customization, & there was a ton of Ravenloft setting details. 'The Nighmarelands' box set doesn't suffer from any of these concerns & in my estimtion was a cut above some of the Ravenloft adventures & titles of the Nineties. Because these were often a cut above many of the second edition adventures & sourcebooks.
Do I think you should get 'The Nighmarelands' box set if your a Ravenloft fan? In a word, yes! This is one of the more indespensible campaign box sets if your going to run dreamworlds in Advanced Dungeons & Dragons 1st or 2nd edition.
Posted by Needles at 9:38 PM