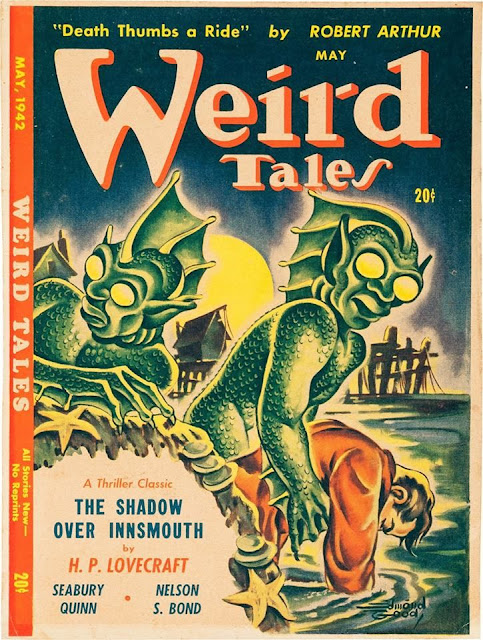 "Know, oh prince, that between the years when the oceans drank Atlantis and the gleaming cities, and the years of the rise of the Sons of Aryas, there was an Age undreamed of, when shining kingdoms lay spread across the world like blue mantles beneath the stars"
Robert Howard's Conan
Upon Hyperborea there are remnants & ruins of Old Earth's Atlantis but these are pale reflections of the glory and power of ancient empire. Scattered across space & time are the echoes of this once mighty nation. Now only the Deep Ones remain to claim the glory & power of this once great legacy or do they? 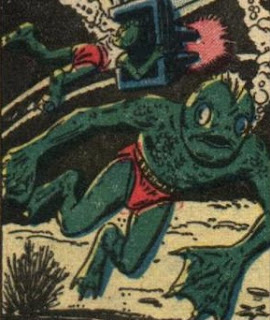 Throughout Hyperborea there are pockets & fully integrated populations of Deep Ones. They walk among mankind unnoticed and unchallenged. But there are rumors of older races of fish like men and aquatic peoples with gills who do not have the taint of the Deep Ones running through their veins nor hear the song of Tulu. Atlantis faced destruction & its colonies on 'Old Venus' & 'Old Mars' were their only hope of survival. Clark Aston Smith wrote about this in the Poseidonis cycle of stories. Poseidonis is the last remaining island of doomed Atlantis and there are hints in those stories that perhaps the Atlanteans adapted themselves to their watery environment.

Throughout Lovecraft's Mythos stories there are hints about the Cthulhu cult & its world spanning organization that goes all the way back to the days of Atlantis perhaps even before. The Deep One's influence was felt all the way back to before the fall of Atlantis destroyed the mighty empire totally. The technologically advanced empire had pockets of mystery cults operating within various temples & woven into fabric of the worship of Dagon & Mother Hydra The Great Old Ones. Throughout the Atlantean empire there were renegade temples, mystery cults, proto-cults operating within the shadows of the technological achievements of the once mighty empire then turned decedent. Echoes of these can be seen within the Church of Starry Wisdom  & many of its later pre-mutations

The thread of the Clthuhu cult continues well into the twentieth century & beyond if we except that Hyprborea is the far future of Earth. Dagon, Mother Hydra & the Great Old Ones continue their corruption well beyond the foundations laid down in Lovecraft's writing;
"men—at least, a certain sort of men; though the creatures were shown disporting like fishes in the waters of some marine grotto, or paying homage at some monolithic shrine which appeared to be under the waves as well... [T]hey were damnably human in general outline despite webbed hands and feet, shockingly wide and flabby lips, glassy, bulging eyes, and other features less pleasant to recall. Curiously enough, they seemed to have been chiseled badly out of proportion with their scenic background; for one of the creatures was shown in the act of killing a whale represented as but little larger than himself"
Dagon"  by H. P. Lovecraft,  July 1910

But what about the Atlanteans themselves there were pockets of other Old Ones & Outer Gods worshiped throughout the empire and there is evidence that lots these entities preserved their little corners of Atlantis on the sea bottom.

"It is well that the reader accept nothing which follows as objective truth, for since the events transcend natural law, they are necessarily the subjective and unreal creations of my overtaxed mind. When I attained the conning tower I found the sea in general far less luminous than I had expected. There was no animal or vegetable phosphorescence about, and the city that sloped down to the river was invisible in blackness. What I did see was not spectacular, not grotesque or terrifying, yet it removed my last vestige of trust in my consciousness. For the door and windows of the undersea temple hewn from the rocky hill were vividly aglow with a flickering radiance, as from a mighty altar-flame far within."
The Temple HP Lovecraft 1920


Lovecraft wasn't the only writer who chronicled the survival of Atlanteans, in 1929 Sir Arthur Conan Doyle wrote The Marcot Deep but you might know it by its Nineteen Seven Eight title Warlords of Atlantis.

In The Marcot Deep we have all of the classic elements of Warlords of Atlantis & more;
"The novel begins with preparations for the dive, off the coast of Africa. Prof. Maracot claims to have located the deepest trench in the Atlantic and is vehement that he shall go down in the specially prepared submersible actually a bathysphere along with Headley and Scanlan. On reaching the edge of the trench, a description of the undersea world is presented. The team comes face to face with a giant crustacean who cuts off their line and hurls them down into the trench. Down in the trench, the team is rescued by the Atlanteans who are the last survivors of the land that was Atlantis.
Although the description of Atlantis may not sound quite futuristic and may seem fantastic, the fact that the novel was written in 1929 should be taken into account. One device in particular is often made use of. This is a thought projector which visualizes the thoughts of a person for others to see. This helps the team and the Atlanteans to communicate.
Descriptions of work habits, culture and various sea creatures are provided. The Atlanteans forage for their food from the sea bed and their slaves, Greeks who are the descendants of the original slaves of the kingdom of Atlantis work in undersea mines. This is made possible thanks to an exceptionally strong and light transparent material which is fashioned into helmets to enable people to work underwater.
The team eventually uses the levity of these spheres to escape to the surface. Headley elopes with the daughter of Manda, leader of the Atlanteans.
In the later part of the novel, Headley describes the encounter with the Lord of the Dark Face, a supernatural being who led the Atlanteans to their doom and was the cause of untold miseries to humanity ever since. This being is likened to the Phoenician god Baal who was demonized by later religions and cultures.

The being is defeated by Prof. Maracot who becomes possessed by the spirit of Warda, the man who managed to convince a handful of Atlanteans to prepare for the worst and thus built an Ark which saved them from the cataclysm which destroyed their land."
You Can Download The Maracot Deep By Sir Arthur Conan Doyle Here 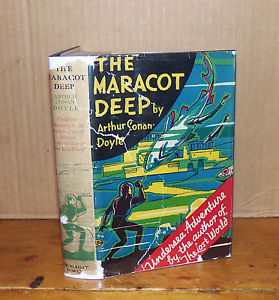 We know that some of the Atlanteans escaped their doomed world and fled into the solar system some even settled on 'Old Mars'. They brought with them some of  their guardian animals, prehistoric monsters, & other life forms.  This was chronicled in Aelita, or The Decline of Mars is a 1923 science fiction novel by Russian author Aleksey Tolstoy. It was later filmed as a classic silent film in 1924. It is one of the first science fiction films from Russia but what does it have to do with Atlantis? There's a fantastic article by Den Valdron that places our  Russian Princess on Burroughs Mars. Originally Aelita's Martian colony is a survival of Atlantis.


We know that the Atlanteans & the Deep Ones were competing for the same natural resources, materials, & land areas  this made competition & infiltration inevitable.  This collision course would once again rear itself when on 'Old Earth' when in  3994 a group of Deep One tainted river pirates under the control of Captain Kordon, Queen of the River Pirates attempted to steal the treasure of the Moks the fire lances of the ancients. This happened near Norfolk Virginia in the Treasure of the Moks episode of Thundarr The Barbarian. Later near Mount Rushmore, South Dakota Thundarr & co. would tackle a group of  Atlanteans Amazons who had used Great Race time travel technology to cast their minds ahead in time. Their queen had her rule taken over by Stryia, a Deep One tainted evil witch. These forces appeared in the
Attack of the Amazon Women of Thundarr The excellent The World of Thundarr The Barbarian Sourcebook -- Final Version For Mutant Future contains a great version of Stryia and her underwater Amazons.
Both C.L. Moore & Leigh Brackett would use similar artifacts to connect their work with both Edgar Rice Burroughs & Robert Howard's King Kull of Atlantis. When in The Mirrors of Tuzun Thune King Kull's consciousness is almost drawn away into an alternative world someplace in the time stream.

"Then came a day when Kull seemed to catch glimpses of strange lands; there flitted across his consciousness dim thoughts and recognitions. Day by day he had seemed to lose touch with the world; all things had seemed each succeeding day more ghostly and unreal; only the man in the mirror seemed like reality. Now Kull seemed to be close to the doors of some mightier worlds; giant vistas gleamed fleetingly; the fogs of unreality thinned; “form is shadow, substance is illusion; they are but shadows” sounded as if from some far country of his consciousness. He remembered the wizard’s words and it seemed to him that now he almost understood — form and substance, could not he change himself at will, if he knew the master key that opened this door? What worlds within what worlds awaited the bold explorer?
The man in the mirror seemed smiling at him closer, closer — a fog enwrapped all and the reflection dimmed suddenly — Kull knew a sensation of fading, of change, of merging...
“Kull!” the yell split the silence into a million vibratory fragments!
Mountains crashed and worlds tottered as Kull, hurled back by the frantic shout, made a superhuman effort, how or why he did not know.
A crash, and Kull stood in the room of Tuzun Thune before a shattered mirror, mazed and half blind with bewilderment. There before him lay the body of Tuzun Thune, whose time had come at last, and above him stood Brule the Spear-slayer, sword dripping red and eyes wide with a kind of horror."

Does this mean that in fact the Barsoomians of 'Old Mars' are actually Atlanteans? Could the Deep Ones of Venus from ERB's Escape on Venus & numerous other 'Old Venus' science fantasy stories hint at a symbolic relationship between the humans & near humanoid races of the old solar system? I think so. 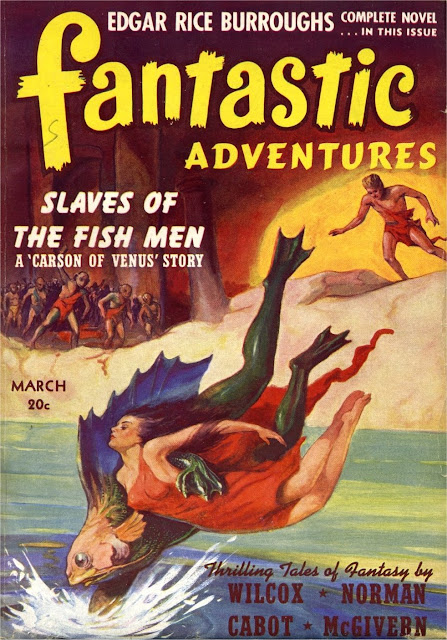 Leigh Brackett & C.L. Moore map out the relationship between the god like alien races that have their roots in HP Lovecraft & the Lovecraft circle's Mythos based mythology. Otis Albert Kline's Venus follows the same type of vein & there are Atlantean roots & ruins within his Planet Of Peril series. 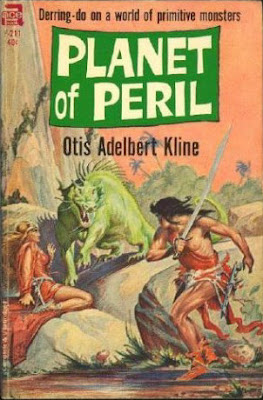 The legacy of Atlantis can be seen throughout the Old Solar System & the influence of Atlantis echoes through out tradition of weird fiction and old school science fantasy gaming.