So incase you haven't been following I've been going back over my collection of original Dungeons & Dragons books. Over the course of several days these books were inspiring me to write a Godbound campaign which supposed to be for my friend DM Steve's players. Yeah there's been a few finiancal reversals that happen to many folks. DM Steve & his family are on the mend so its all good. Today has been a day of distractions & that came in the form of the OSR Humble Bundle.  But once again I'm looking into this Godbound campaign & also I'm unpacking Dieties, Demigods, & Heroes, again. Glen Taylor's review of Gods, Demi-Gods and Heroes in The Space Gamer No. 9 gets into some very interesting points;
"Glen Taylor reviewed Gods, Demi-Gods and Heroes in The Space Gamer No. 9.[3] He states that as "the fourth and purportedly last supplement to Dungeons and Dragons" it "might be expected from such a 'last bow,' as it were, this newest supplement is different from all three of the previous ones, in a major way. [...] This is by no means 'standard' D&D material."[3] He commented that "I'm no scholar of ancient (and modern!) legends, but it seems to me the authors have given a view of the various mythological concepts which is both panoramic and scrutinously details, and as complete as possible within the space limitations imposed [...] Kuntz and Ward have taken material which has come down to us in a sometimes distorted and almost always nebulous form, and clarified it into a solid material which would fit in well with any fantasy game."[3] Taylor concludes his review by saying that Gods, Demi-Gods and Heroes is worth the price "for the mere pleasure of reading it. For students of ancient legends it's a Type I treasure. It should much lived up any D&D campaign in which it is used"

Why?! If your playing a transhumanistic game where humanity has stormed Heaven & things have gone rather badly. Then it might be time to look at the  strange mythological  cosmologies of Ward & Kuntz Gods, Demi-Gods and Heroes. 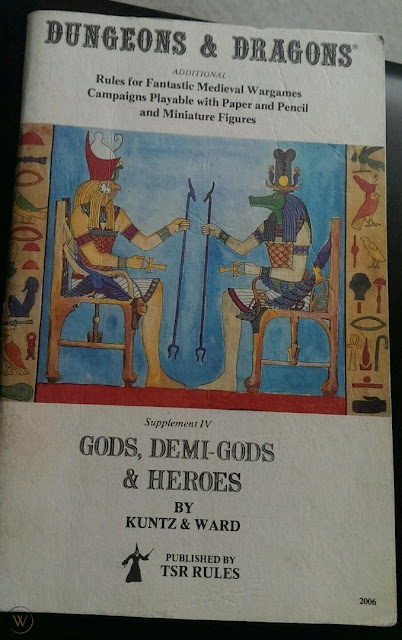 This gets into one of my favorite Egyptian gods from Gods, Demigods, & Heroes;

"PTAH GOD OF OUTER SPACE "OPENER OF THE WAYS"
Armor Class — 5 Magic Ability: (See Below) Move: ? Fighter Ability: 18th Level Hit Points: 200 Psionic Ability: Class 6
Ptah is said to have existed before the Gods. He stands 10 feet tall, with a humanoid shape, jet black skin, and eyes that seemingly appear invisible but upon closer inspection are really pools of outer space. He can force beings into a nameless void with the look of his eyes (magic saving throw applicable). Sending one being per melee round into this void, only he can bring them out again. He is not affected by magical weaponry, and there is no known limit to the speed he can travel on land or in the air. In combat he never uses armor and fights with the Scepter of the Gods. This weapon tells its user of the strong points of any enemy faced, is able to nullify one of any type spell used against it per melee round, can also do this with the powers of other magic items used against it, and hits for 1-100 points of damage.
Ptah enjoys new ideas and devices. When a being creates a device that is highly useful (judge's option) there is a 10% chance that the God will reward that being with a Thet. This device is an amulet geared to do one of two things: it can project an antimagic shell around the user which does not affect the user's ability to cast spells, the second allows the wearer to go ethereal once a week."  Taken one part of Marvel's Doctor Strange's Eternity & HP Lovecraft's Outer God Yog-Sothoth. Why because he is both the key & the gate to all known time & space as well as the planes. It exists outside of & beyond these things.


Yog-Sothoth is a cosmic entity and Outer God. Born of the Nameless Mist, he is the progenitor of Cthulhu, Hastur the Unspeakable and the ancestor of the Voormi. He is also the father of Wilbur Whateley." 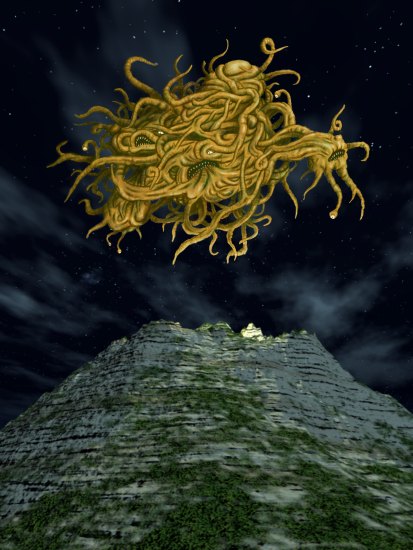 Now basically in Godbound humanity has stormed Heaven & killed all of God's angels, attendants,etc.,etc. only to find that the throne of Heaven is emply. They conclude that they've become the Biblical God themselves ( no worries their not). The Shattering happens & anyone that studies mythology has seen this style of event` a million times. The fall of humanity because they've gotten too close to the realm of the gods resulting in huge affair that shatters their grip on the stars & cosmos. The question that I keep asking is, 'Is there room in a campaign for the infernal, theDivine with a capital 'D', Transhumanistic elements, & even a Lovecraftian mythos'.  I believe the answer is yes.  And it all comes down to the writings of A. Merritt especially his book the Moonpool.  This book isn't his best & the prose is very archaic to modern readers but the ideas, settings, etc are killer the basic plot goes something like this; "The plot concerns an advanced race which has developed within the Earth's core. Eventually their most intelligent members create an offspring. This created entity encompasses both great good and great evil, but it slowly turns away from its creators and towards evil. The entity is called either the Dweller or the Shining One.

Eventually of the race which created it only three are left; these are called the Silent Ones, and they have been 'purged of dross' and can be described as higher, nobler, more angelic beings than are humankind. They have also been sentenced by the good among their race to remain in the world, and not to die, as punishment for their pride which was the source of the calamity called the Dweller, until such time as they destroy their creation—if they still can. And the reason they do not do so is simply that they continue to love it.
The Dweller is in the habit of rising to the surface of the earth and capturing men and women which it holds in an unholy stasis and which in some ways feed it. It increases its knowledge and power constantly, but has a weakness, since it knows nothing of love. The scientist Dr. Goodwin and the half-Irish, half-American pilot Larry O'Keefe, and others, follow it down. Eventually they meet a woman, beautiful and evil, named Yolara, who in essence serves the Shining One, and the 'handmaiden' of the Silent Ones, beautiful and good, named Lakla. Both want O'Keefe and eventually battle over him.
There is also a race of very powerful and handsome Polynesian-like 'dwarves' and a race of humanoids whom the Silent Ones developed from a semi-sentient froglike species.
There develops a battle between the forces of good and evil with not only the entire world, but perhaps even the existence of good itself is at stake. But can the forces of good prevail using fear as a weapon? Or will they have to rely upon love expressed by willing sacrifice?"
Basically it goes like this 'the advanced race at the Earth's core' is what's left of some of humanity after bargaining with the PTAH GOD OF OUTER SPACE "OPENER OF THE WAYS" aspect of Yog-Sothoth. They gain their power but pay for it in other aspects. The plot of the Moonpool goes ahead & all is right with the pulpy world. But humanity has become aware of the events of the Moonpool, the 'Shining Ones', and the threat of these alternative groups of humanity from these 'lost worlds'. The thread that ties all of this together is  Dr. Goodwin who later on appears in the Metal Monsters. His work is what ties all of these cults & whatnot together. 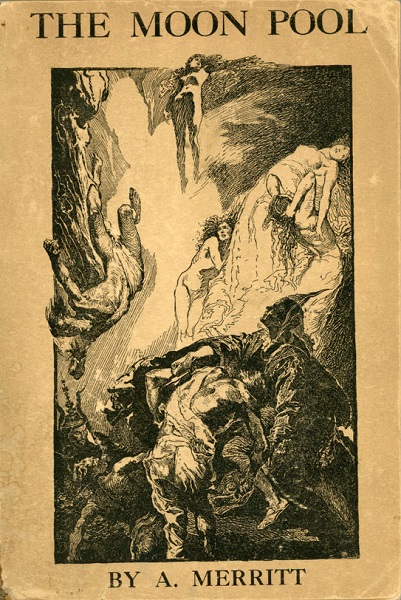 Now this all ties back in with the fact that way back in January of this past year I was doing a bunch of stuff connected with Dungeons & Demons - Mayfair Games Demons Box Set One - OSR Campaign Commentary. There's also the fact that I've got Luz still in play from Greyhawk in this from OSR Commentary - The Luz Dossier - A Paler Shade & Echo of Greyhawk - Campaign Notes . So where do I go with this campaign mess?! Well I start running with it as a dungeon master & amazingly the players will sort it out for me. This is often the case amazingly folks.
Posted by Needles at 8:09 AM