Review & Commentary on Advanced Dungeons & Dragons - I11: "Needle" By Frank Mentzer For Your Old School Campaign

"The king's notice asked for adventurers to undertake a mission to a far land. It was marked with the rune for "high danger, high reward" so of course you volunteered.The king has heard of a great obelisk that towers over a ruined city in a far country. He wants to know more about the obelisk and its strange powers. Your job is to find the obelisk and bring back a report to the king. The mission seems absurdly easy...until you reach the jungle.Don't think the king is through with you if you get back to the capital city alive. You haven't seen the last of that jungle yet. Is a share in the spoils of an ancient civilization worth the risk?Don't forget to pack you bug repellent!"

Frank Mentzer has been a friend for a number of years of mine on Facebook. But when it comes to I11: "Needle", this is a module with some history with me & its a weird one. Come back down the corridors of time to '88 with me. I got my PC's leveled up after a series  harrowing adventure experiences & then we made a journey into the jungles of I11: "Needle". We were killed off to a man & it was a  total TPK. We were obliterated in ten pages in of a  forty eight pages of the module. 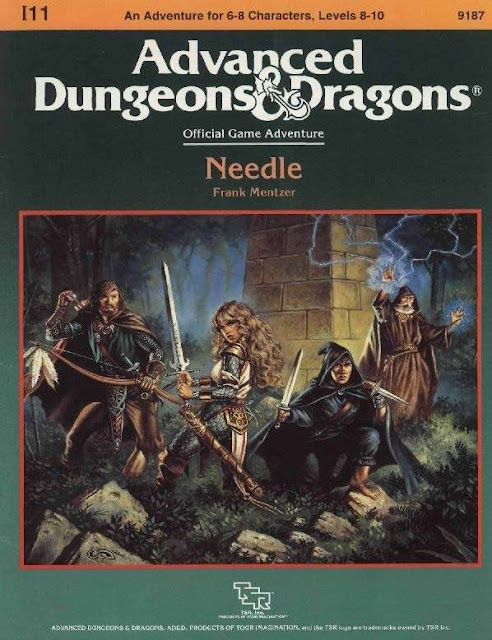 Let's get the history of this module outta the way; "I11: "Needle" (1987), by Frank Mentzer, is the eleventh adventure in the Intermediate series for AD&D. It was published in February 1987." Even though it says intermediate on the cover this is a deadly module from the ground up. There are reasons for this according to the Drivethrurpg entry's history on "I11: "Needle" ; "After founding the RPGA in 1980, Frank Mentzer immediately began writing tournament modules for his new organization. He recalls writing more than 14 of them, though only the first four were published — appearing as R1: "To the Aid of Falx" (1982) through R4: "Doc's Island" (1982).

When Frank moved over to working on the BECMI Basic D&D Set (1983-1986), TSR decided to revamp the "R" RPGA series as the "RPGA" RPGA series (1983), which began publishing Tracy Hickman modules rather than Mentzer's other works. Mentzer's later "R" adventures were either unpublished or instead appeared in the RPGA's Polyhedron magazine.
This was the fate of an adventure that Mentzer has labeled as R11: "Needle". It was a three-round tournament that featured what Mentzer calls "a pretty silly round 3". The adventure was originally published in Polyhedron #24-26 (May/June 1985 to Sept/Oct 1985) in three parts: "Ruins of Empire", "Retrieval", and "The Powers that Be". A few years later, TSR decided to publish it for the mass-market. Under the editorship of Barbara Young, the tournament adventure appeared as I11: "Needle" (1987)."

So "I11: "Needle"  is a revamped tournament module taken into the mass market AD&D product arena. The module's adventure structure is interesting because it gives an anatomy lesson in tourament adventure design;" "Needle" is neatly divided into three mini-adventures, one for each round of the original tournament: a quest for a magical obelisk; the return of that obelisk to the king; and a journey into strange lands through the obelisk. It's a great example of how to divide a tournament into rounds while still creating a coherent story."
But this same adventure structure makes running I11: "Needle" especially great for old school campaign episode play. This is a great module to run along side of S3 Expedition to the Barrier Peaks By Gary Gygax . The starship in S3 crash lands & it unleashes cosmic destruction on the world. 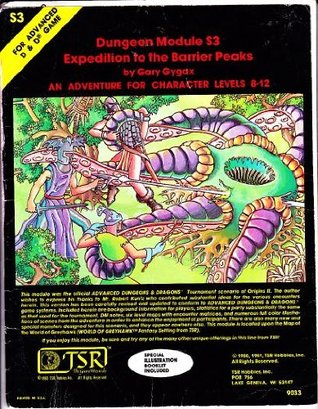 This event allows the world to experience a shift into weirdness as "I11: "Needle"  takes up where S3 left off. The pregeneration are alright but over the years I've made other PC's take up the mantle of power. The shift allows the PC's to assume the role of heroes far more readily then in middle of the science fantasy action. Because in the latter half of "I11: "Needle"  is filled with science fantasy goodness including a new spider men style monsters; . A new race of intelligent spiders called the Black Chak appear in "Needle". They were later revealed by the Mystara Monstrous Compendium Appendix (1994) to be the same species as Mystara's planar spiders, who appeared in M5: "Talons of Night" (1987) and the "IM" series — particularly IM3: "The Best of Intentions" (1987). Though "Needle" was officially a generic module, this might suggest it's actually set in Mystara.
"Needle" also makes good use of both bullywugs and grippli, revealing that they were once one nation that was sundered by a civil war. Most adventures of the era would instead have used lizard men for this role."
The choice of monsters shifts the action into high gear with the PC's experiencing the best of science fantasy action.
While everything is geared around the tournament adventure style threw caution to the and to develop that sweet old school adventure campaign action. With all of the essence of  "I11: "Needle"  oriented towards tourament and session module exploration.  "I11: "Needle"  is a great intermediate adventure for both DM's & players who want that sweet action without the backdrop of an entire mini campaign right in their PC's back yard.