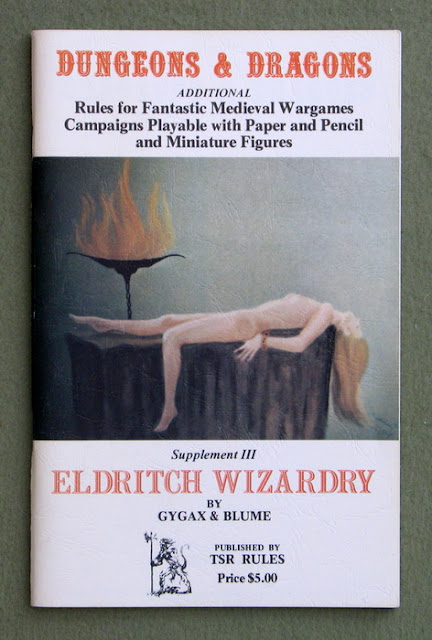 So once again I ran into an old friend in the grocery store, this time it was DM  Raj. Raj is an interesting guy whom we went Grammer school with. He's got a group of D&D players who work with him in the local hospital where he works as an anesthesiologist by day & a dungeon master of doom by weekends once a month. He's a huge fan of Spelljammer but he's been running it with first edition Advanced Dungeons & Dragons for years. We were discussing my Cha'alt elevator pitch for Godbound today. But then he started brainstorming about a recent encounter his players had with one of the Axes of the Dwarven Lords. The Axe of the Dwarven Lord first appeared in original Dungeons & Dragons Eldritch Wizardry 1976, Dungeon Master's Guide (1979), Book of Artifacts (1993),[5] Encyclopedia Magica Vol. 1 (1994), & the  Axe of the Dwarvish Lords (module, 1999).
The Drivethrurpg  " Axe of the Dwarvish Lords'  write up has a pretty consistent history on the items; "The Axe of the Dwarvish Lords is one of D&D's legendary artifacts, first appearing in Supplement III: Eldritch Wizardry (1976) by Gary Gygax and Brian Blume. There's no record of the artifact's author or his intention. At the time it was simply described as an "axe … forged from the heart of a volcano by a dwarvish king long forgotten."

As with most of D&D's classic artifacts, the Axe reappeared first in the Dungeon Masters Guide (1979), then in the Book of Artifacts (1993). However, the descriptions in these references wasn't particularly consistent. The first said the Axe was lost in the "Invoked Devastation", an early event in the World of Greyhawk. The second instead said it was lost in the civil war that followed when "Brassbeard slew his uncle, King Irontooth of Moradinson". Axe of the Dwarvish Lords uses the latter history (and expands upon it), removing the Axe from the world of Greyhawk … but unlike some of D&D's other primordial artifacts, its links were never that strong.
Both Book of Artifacts and Axe of the Dwarvish Lords claim that the Axe is one of five artifacts. The others are "the Brutal Pick, the Earthheart Forge, the Anvil of Songs, and the Shaping Hammer", while the Axe is actually known as "the Fierce Axe"."

Back to DM Raj who runs a game of Spell Jammer & his adventurers run across a massive abandoned  Dwarven Citadel ship; "More than mere vessels, citadels were also bases and homes to the dwarves inhabiting them. They were equipped with a different kind of spelljamming helm known as forges, which were powered by the mining activities of its inhabitants as they explored minerals within the asteroid itself.[1]

Capable of moving citadels up to 700 tons in size, forges provided energy for spelljamming and produced about 10,000 gp worth of dwarven items per month.[3] A typical citadel was capable of providing ores and prime materials for a limited amount of time, depending on its size. A 300-ton citadel, the smallest variant, could last between 6 and 24 years.[1]
After having been depleted of its resources, a citadel was emptied by its inhabitants and the whole clan, along with the forge, was transferred to a new asteroid. Abandoned citadels typically became lairs of monsters or pirates. They also tended to attract adventurers in search of treasure that might have been left behind" The party sneaks aboard to find out why there's a massive Dwarven Citadel ship sitting around a dead star. Inside they find the whole works abandoned except for the usual dungeon dwellers but at the heart of the citadel they find the remains of lots of dead dwarven warriors & a temple with one of the 'Axes of the Dwarven Lords'! 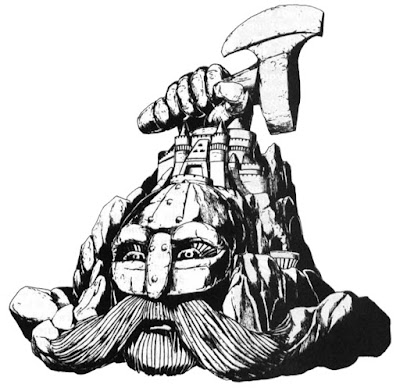 This was a war forge citadel & used for forging weapons for Dwarven warriors, priests, etc. The ship had been abandoned for a long time & there were signs of violence all over the place. Raj's players didn't have long to stick around to get in on the action as the neogi ships   started to show up. And the undead remains of the Dwarven warriors began to animate. The citadel's soul came alive & the party left the citadel barely escaping with their lives. In case your wondering this was a jihad ship. According to the Forgotten Realms wiki entry on Dwarven Citadel ships ; "Most citadels were living ships, home to their inhabitants and dedicated to exploration or trade, according to their populations' wishes. However, some citadels, known as jihad ships, were dedicated to waging war against sworn enemies of the dwarven race. Such crusades were declared by a council of representatives of several dwarven pantheons. Planets and ships belonging to their enemies were attacked on sight relentlessly.[1]
Large citadels were hard and difficult to maintain and for that reason were quite rare. Even larger citadels existed, of over 700 tons. However, those bases could not achieve spelljamming speeds and were most frequently used as stationary or orbiting bases"
Raj & got to talking because of the fact that what was to happen if in the far future of Clark Ashton Smith's Zothique all of the Dwarves are extinct?! What would happen if a jihad ship made orbit around an Earth like planet or worse still Earth?! Well that's where the Axe of the Dwarven Lords comes in.. According to Supplement III: Eldritch Wizardry (1976) by Gary Gygax and Brian Blume the Axe of the Dwarven Lords; "This axe was forged from the heart of a volcano by a dwarvish king long forgotten. It passed from father to son until it disappeared in battle over a thousand years ago. Since then it has been rumored to have appeared in various places around the world. The axe has all of the fighting qualities of a sword of sharpness. In addition it confers on its user all of the natural abilities of dwarves, i.e., infravisions. the ability to detect sloping passages, traps and new construction. After prolonged use it tends to make its user resemble a dwarf; he becomes shorter, stockier and grows a profuse beard. Also it has One power from TABLE II. one from TABLE III, one from TABLE IV, and one from TABLE V."
Raj was telling me that there were rumors among certain Dwarf  Dungeons & Dragons fans  that the Axe could in fact  not only change the owner into a proto Dwarf like being but others as well! Imagine what might happen if that  citadel jihad ship made planet fall & the owner of the Axe of Dwarven Lords wanted shock troops or others for war that never ended?! Innocents might be turned into the next projentors of the Dwarven race! 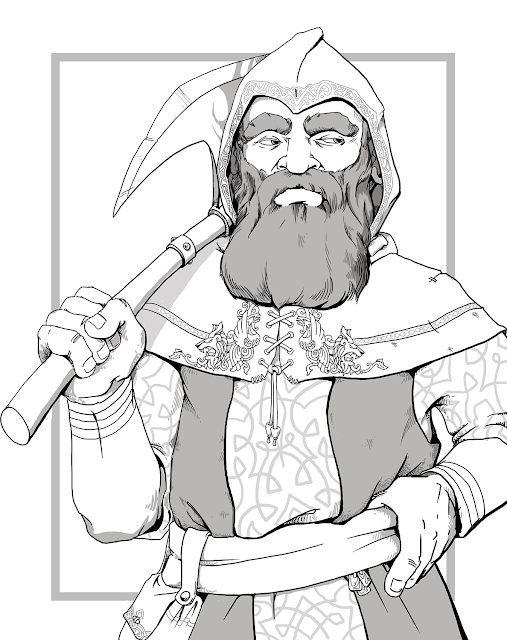 There are mythological precendes for this sort of thing to occur especially in the European mythology;"Norse mythology provides different origins for the beings, as recorded in the Poetic Edda (compiled in the 13th century from earlier traditional sources) and the Prose Edda (written by Snorri Sturluson in the 13th century). The Poetic Edda poem Völuspá details that the dwarfs were the product of the primordial blood of the being Brimir and the bones of Bláinn (generally considered to be different names for the primordial being Ymir). The Prose Edda, however, describes dwarfs as beings similar to maggots that festered in the flesh of Ymir before being gifted with reason by the gods. The Poetic Edda and Prose Edda contain over 100 dwarf names, while the Prose Edda gives the four dwarfs Norðri, Suðri, Austri and Vestri (Old Norse 'North, South, East, and West') a cosmological role: they hold up the sky.[1] In addition, scholars have noted that the Svartálfar (Old Norse 'black elves') appear to be the same beings as dwarfs, given that both are described in the Prose Edda as the denizens of Svartálfaheimr.[5]
Very few beings explicitly identifiable as dwarfs appear in the Poetic Edda and Prose Edda, and they have quite diverse roles: murderous creators who create the mead of poetry, 'reluctant donors' of important artifacts with magical qualities, or sexual predators who lust after goddesses.[6] They are primarily associated with metalsmithing, and also with death, as in the story of King Sveigðir in Ynglinga saga, the first segment of the Heimskringla—the doorways in the mountains that they guard may be regarded as doors between worlds.[7] One dwarf named Alvíss claimed the hand of Thor's daughter Þrúðr in marriage, but he was kept talking until daybreak and turned to stone, much like some accounts of trolls.[8]
After the Christianization of the Germanic peoples, tales of dwarfs continued to be told in the folklore of areas of Europe where Germanic languages were (and are) spoken.[9] In the late legendary sagas, dwarfs demonstrate skill in healing as well as in smithing.[10] In the early Norse sources, there is no mention of their being short; in the legendary sagas, however, they are "small and usually ugly".[1] Anatoly Liberman suggests that dwarfs may have originally been thought of as lesser supernatural beings, which became literal smallness after Christianization.[11] Old Norse dwarf names include Fullangr ('tall enough') and Hár ('high'), whereas Anglo-Saxon glosses use dweorg to render Latin terms such as nanus and pygmaeus ('pygmy').[12][13]
Dwarfs in folklore are usually described as old men with long beards.[13] Female dwarfs are hardly ever mentioned. Dvalinn the dwarf has daughters, and the 14th-century romantic saga Þjalar Jóns saga gives the feminine form of Old Norse dyrgja, but the few folklore examples cited by Grimm in Teutonic Mythology may be identified as other beings.[14][15] However, in the Swedish ballad "Herr Peder och Dvärgens Dotter" (Swedish 'Sir Peder and the Dwarf's Daughter'), the role of supernatural temptress is played by a dwarf's daughter."
The Dwarves guarded doorways between worlds?! These beings have contact with Drow like Elves & the whole affair reeks of Norse & German mytholog? This is a perfect opporunity to introduce the Axe of the Dwarven Lords. The citadel makes planet fall on modern day Earth & the PC's are called into stop the process of evolutuin. Gods & heroes can handle this sort of thing?! Maybe!

The encounter with the Dwarven citadel highlights the fact that this is a very high level encounter and there's lots of room for potential wrangling on the part of the players..