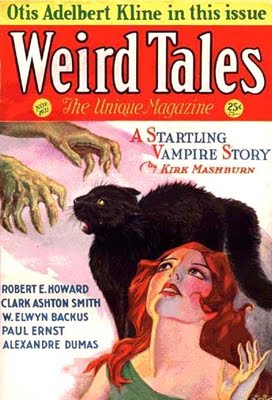 Grab It Right
Here
From the 1932 issue of Weird Tales, this one is a must read for both the regular dungeon master and those running Astonishing Swordsmen and Sorcerers of Hyperborea. This story has so many of the classic elements of the Hyperborean cycle by Smith. The story is very Dunsanian in its prose, exacution and substance.
The story gets right into its world and drags you in as you read the first couple of paragraphs. The ideals are very clear here and the sword and sorcery motif is all there.
According to wiki:
"Satampra Zeiros" is a story written in the style of Lord Dunsany, who wrote a similar tale of thievery gone wrong called "How Nuth Would Have Practiced His Art upon the Gnoles". Robert M. Price points to Dunsany's "Bethmoora", featuring another deserted city, as an additional likely inspiration"
The material in the Lord Dunsany material was so inspiration that it was used as the basis for the deserted city in  the film Hellboy II.
Once again Wiki :
"Bethmoora is a short story created by the Irish writer Lord Dunsany. Published in 1910 in the book A Dreamer's Tale, this short story tells the tale of a desolated place named Bethmoora.
In Hellboy II, Bethmoora is located in Antrim, Northern Ireland, and is a legendary underground land. It used to be a lively city, but as soon as the Golden Army was stored in Bethmoora, a plage of silence and death descended upon the land."
You can read about Dundsany's Bethmoora right over HERE


Even HP Lovecraft himself loved Smith's tale! Once again according to Wiki :
When Smith sent his friend H. P. Lovecraft a copy of the unpublished manuscript, he responded with "well-nigh delirious delight.... You have achieved in its fullest glamour the exact Dunsanian touch which I find it almost impossible to duplicate.... Altogether, I think this comes close to being your high point in prose fiction to date...


Smith would go on to write far more in the Hyberborean cycle, his ideas, story content and exacutation continued with each new Hyperborean tale. The ideas laid down in the story are easily exacutated with many of the Swords and Sorcery rpgs on the market today. Astonishing Swordsmen and Sorcerers of Hyperborea clearly emulates many of Smith's themes from The Tale of Satampra Zeiros.
Posted by Needles at 3:06 AM