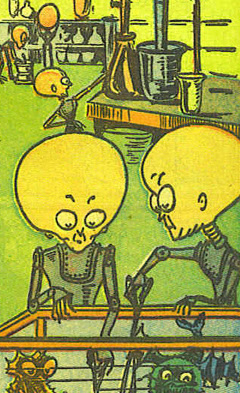 "The Brain-Men of Mars were brilliant humanoids who required mechanized exo-skeletons to help their small bodies support the weight of their gigantic heads. When Dr. Martinious came to Mars, he used the scientific genius of the Brain Men to devise a weapon that would allow him to conquer the universe, starting with Earth. Their plan involved sending meteors to earth, infested with martian insects that would spread disease across the land. Stardust arrived on earth, giving scientists there the secret to wipe out the insects and the disease they carried.
The Brain-Men were highly intelligent and technologically advanced. They carried small hand held ray weapons that were powerful enough to destroy a building." From Here

Another genespliced species of Martian artificially engineered by the Endorians. These creatures are part human & part of the extinct  Kaldanes  stock. The QURRER'a are bred for superior minds & a lust for conquest. They excel at both. These beings are scientists, weapons designers, & the descendants of  the Colonists of Mars before the Atomic Fires! These beings minds & intelligence has out paced the biology of their frail bodies. They must wear   mechanized exo-skeletons to survive the gravity of other worlds. These beings gain -1 to skill checks when  studying, or using any technology level of 3 or above. They may mentally exploit the technology or design to the best of their abilities.
These beings burn with a curiosity they tears its way through their society. If presented with a problem they will go all out to solve it even excluding food, drink or  or repast of any type. Once the problem is solved they were be pensive for another & so forth. Science, engineering, etc. are all obsessions to be pursued provided that they yield the correct fruit that can be used in the conquest of other worlds.   The majority of  the QURRER'a have some Psychic ability and those in positions of power are almost always full-blown members of the Psychic Class, frequently of significant ability. These abilities are honored & tailored to the individual through psychic lodge schools.
Equipment & weaponry  is often created by this race of beings is seemly is beyond their level four technology manufacturing capabilities. Devices created are sold to the highest bidder. They are often employed as mercenary scientists  through the galactic community.
The QURRER'a are a cruel & very hostile race that exploits & conquers others. They bend only to the telepathic siren call of the Endorian masters..
SWN Default Settings Notes: Roll up a  QURRER'a as normal but there is a 45% of the character being telepathic & or psychic. Since these beings have artificially evolved over the the decades. There is a 50%   that this race will have +1 to all mental attributes if NPC or a +1 in any one mental attribute of the player's choosing.. These beings are at a -2 to resist the psychic influences & commands of the Endor or Endorian psychic artifacts.
NPCs will be armed level 4 or above artifacts or energy weapons capable of doing 1d8 points of damage per shot.
The QURRER'a are not recommended as a PC race.


Many of the inspirations for this race came from Here