"It was revealed earlier this month that Joss Whedon had signed an exclusive deal with Marvel Studios to, among other things, help develop a new live action series for Marvel Television at ABC. Today, Deadline has revealed that, now greenlit by ABC, the series will be titled "S.H.I.E.L.D." and will focus on the top secret defense organization featured throughout the Marvel cinematic universe.


Whedon will write the pilot alongside his brother, Jed Whedon, and Maurissa Tancharoen (who previously worked with Whedon on "Dollhouse" and "Doctor Horrible's Sing-Along Blog"). All three will also join Jeffrey Bell and Jeph Loeb as executive producers. The site notes that Whedon may also direct the pilot, but that nothing is confirmed at this time.


It remains to be seen which, if any, actors and/or characters from the Marvel Studios films are planned to appear on the show, though it's very likely that "S.H.I.E.L.D" will have direct ties to future Marvel Studios cinematic entries, including the Whedon scripted and directed Marvel's The Avengers 2, set for release on May 1, 2015.


As always, check back for more details as they become available."  From Super Hero Hype Originally Available right Here"


Right I can see much rejoicing in the streets about this. Surely there is no way that I can use Shield in my old school space game? Oh there is & its within the old school continuum of Marvel. Shield has been operating in one form or another since the 1930s in the Marvel universe. Don't ask for examples simply go with it folks. They emerged into the cold cruel world of the 90s & then in the 00s. They really got their jump with the 60s. This is the Nick Fury that I know and love. The ultimate bad ass spy from the 60s. A direct result of the Man From Uncle & James Bond plus the Avengers Tv show..I'm not going to go into the entire history of Shield in Marvel Comics but they've had their hands in every dirty little covert secret this side of Thanos.


So when did the other guy take over? Well because of the Ultimates comic book titles. In the comic book world things are seldom what they seem to be. There could well have been 2 Furys running around & no one would have been the wiser. Shield has had its fingers in the space race right from the beginning. There have super hero sized menaces right from the beginning of the deal. Shield has a bio weapons division as well. Beyond Shield is Control an X files style black shadow government organization that was responsible for the radioactive spider that Peter Parker gets, the Gamma Bomb going off, & a thousand other incidents that have happened.


The odds are that there are number of Shield related ships that have been sent into deep space with God knows what on board. These space hulks might have Hulk clones deemed to dangerous, mutants from beyond the pale of man or any number of things to throw at players.
Shield agents have been showing up in comic cross overs for ages & might show up again. This gives the DM a clever way to throw information with a low ball NPC approach. 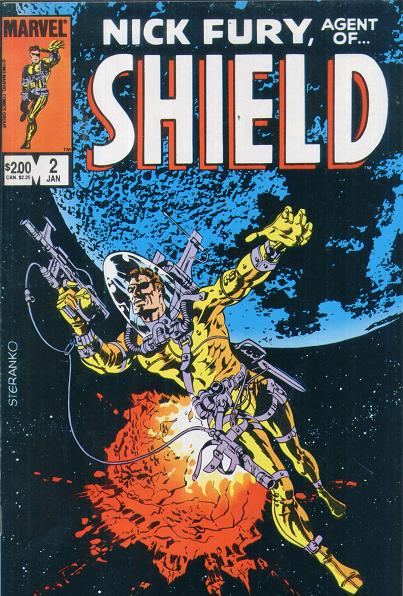 Shield could be involved in any number of nasty secrets including Xenomorph studies that make anything presented in Promethus look like Sunny Brook Farm. Lets not mention their involvement with extraplanar creatures. The affairs with the Scorpion Key & any number of shady deals. Name any Marvel Character & they've been right there all along.
An extensive history of the organization can be found right Here

You can get a much more in depth look from Dragon magazine by downloading & reading the classic Compiled Marvel Phile. This  has every Dragon Magazine article from Marvel Super Heroes  right in one place.
Why wait for the television show when Shield can be mucking around in your campaign today!

All Copyrights & Trademarks belong to their respective holders. No infringement is meant here merely fan made fun..The writers of this blog would like to thank Classic Marvel Forever.
Posted by Needles at 12:45 PM