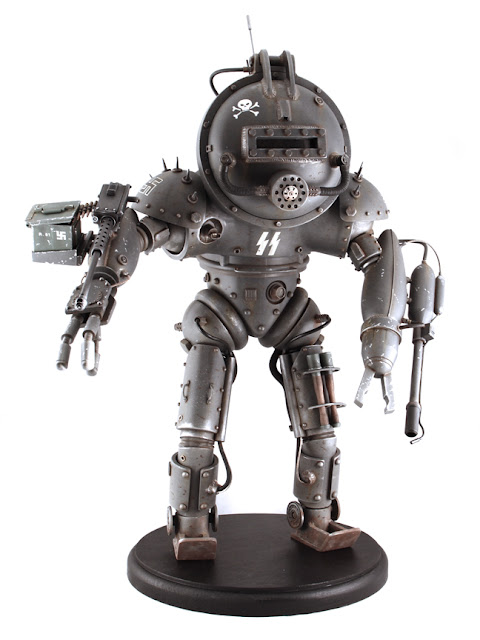 Produced at the end of WWII the Foxbat was in its first trials during early 1943 when the project was moth balled due to budget cuts by Hitler's Special Weapons Division. Funds were moved elsewhere & the project forgotten. Actually the project was taken over by the Black Sun Units taken within the wing of an Antarctica  base. Once away from prying eyes the neural feedback or boxer system was perfected. The boxer system enabled a pilot to react almost with no thought at all. The user gains + 2 to all dexterity based rolls. The pilot's strength increases by +3 on all rolls.

The Fox bat featured a full suite of tech level 3 items to help the hand picked pilot. There was a full combat radio & tactical targeting system.
Each suit is armor class 19/2

The left arm is equiped with a light machine gun armed with tracker rounds. The gun does 1d8 points of damage & has range of 100 yards.
The suit has a 3 hour air supply & is immune to gas, poison, etc & has a Vril/copper  mesh screen installed enabling +2 on all psionic saving throws.

The Fox bat also has a proto type plasma grenade upon its back & must be taken from its hiding place. It does 2d8 points of damage. The weapon is a terror weapon. It can be thrown 200 yards with the exo assistance of the armor.

The armor saw action repeatedly until the end of the Occult wars in 1958. There are 11 known variety of this same armor & chassis being used throughout the 5th column movement  in America.

Please- note that the "volunteers" were often the most enthusiastic & of the right temperament for  neural feedback or boxer system. A hybrid of Nazi black science & Mi Go sorcery. The program used a wide variety of available material.
From those born with genetic deformity to soldiers paralysis by enemy fire.  Even those who worked too closely with the material were given over to the capable hands of the Black Sun scientists.
The feedback system all too often bonded completely with the nervous system of the user even to the point of synthesis. The pilot & mech would sometimes merge creating one of the eleven varieties of this versatile machine system.
Often the merging of man & machine would create a new being far removed from any single characteristic of the human race. Sexual, emotional, or any trace of humanity was lost beneath a veneer of something far more sinister.

]
The original artist's awesome site can be found right Here
Posted by Needles at 9:36 PM