Let me start off by saying that none of the rpg writers or makers have anything whatsoever to do with with this campaign. This was all me because this was one of my all time favorite campaigns. Why?! Because I was in love with all things Jack 'King of Comics' Kirby & pre Disney Marvel movies back in 20o8. Back then it was all about a hybrid BECMI Dungeons & Dragons/Advanced Dungeons & Dragons first edition system that was used to convert everything on the fly. Was I violating trade mark & copy right?! Not for a personal home game I wasn't sure occasionally I'd publish a particularly good Lovecraftian or classic Marvel NPC or monster. But all of this came under the heading of personal parody rpg campaign.


Once upon a time I was quite constantly taking care of every little bit of Carcosa rpg information that crossed my desk back in 2007 to 2012. Lately my tiny brain has been working on possibly resurrecting my Marvel Super Heroes rpg/Carcosa rpg game campaign. Over time tastes change & so do players.

And if your a reader of this blog then you know of my passion for Cha'alt but that brings us across the fact that how would I go about incorporating this hybrid Lovecraftian planetary setting?! 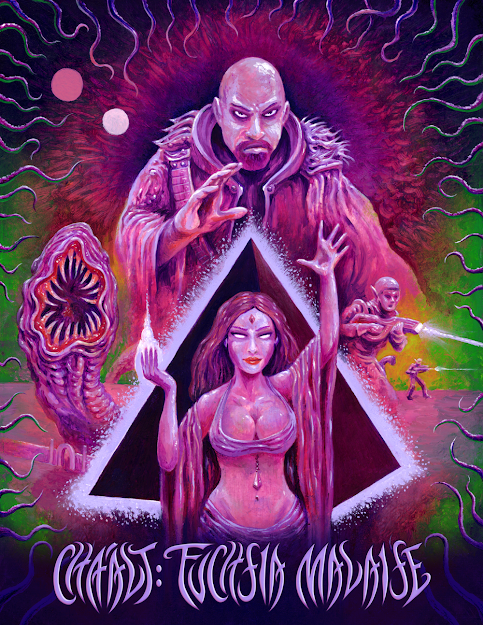 So let's talk about the fact that you've several distinctly sets of Lovecraftian factions at not only each other's throats but also possibly creating their own unique agents to travel across face of  both Carcosa & Cha'alt. The way I'm envisioning Jeffrey McKinney's Carcosa is that the book is one part of the planet & Cha'alt is the  desert part. But what the Hell is this religious war going on across the face of the planet.

"THERE IS ALWAYS MORE TO SEE. THE UNIVERSE HAS NO END... AND NEITHER DO I."

There are legends about them on every planet, in every galaxy. They are timelss, ageless. They appear when great danger threatens, and then vanish just as quickly. Some revere them as gods, others fear them as demons. They call themselves the Immortals... and they may be the answer to your dreams, or the source of your nightmares."

Right now we're  working on incorporating some of the ideas from Steve Miller's Neulow Games D20 Secrets of the Immortals into the mix for this campaign but at the moment this is in the early phases. Some of the powerblocks that he's got in here are going to be make some appearances coming up in the next couple of weeks. I've already got several local players lined up for this so watch this space.
Posted by Needles at 1:00 PM