"Which modern heroes  going to be there to defend the Earth against every freak, alien, mutant, & dungeon dweller that comes up from the underground?! There has to be ordinary men & women with extraordinary talents to help handle the evil coming to the surface world!? "
The dungeons of the Earth lead deep into dangerous ruins & former lost civilizations of the 'Inner Earth'! Who will save our cities & our towns from the machinations of Drow, Druegor,etc.  'D3 Vault of the Drow' By Gary Gygax. 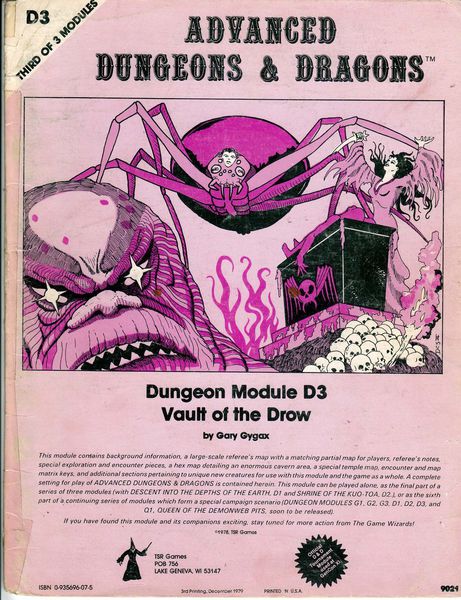 There are times when I really should stay off of the Pallid Stallions website & blog because I fell down a memory hole with 'The Big Jim P.A.C.K. toy line.' The following add seemed to be in every comic book in 1975.  So yeah it was a natural that some years later I'd fall into the toy collecting sphere. One apartment fire later & this collection along with my Shogun warriors were history. But I could see crossing this party of adventurers concept with a Richard Shaver style inner Earth or Edgar Rice Burroughs  Pellucidar style Dungeons & Dragons campaign. 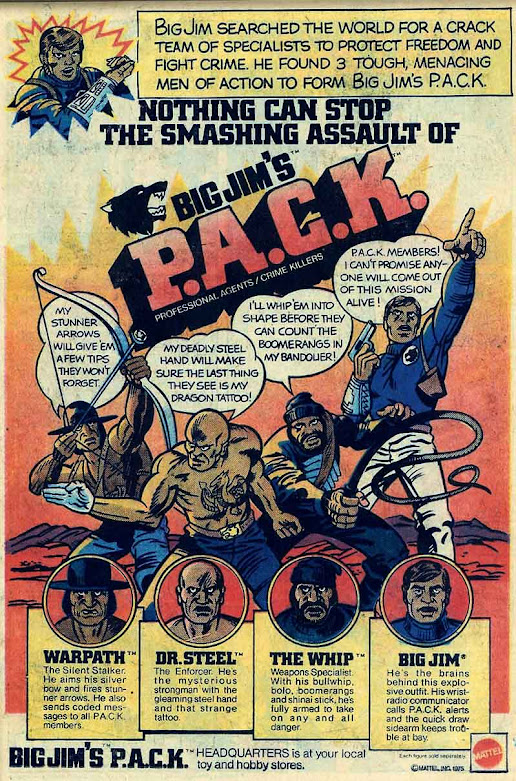 The idea of a group of specialist & commandos taking on the dangerous threats from the inner Earth isn't anything new. Looking over the Toy-Venture's Dr. Steel video was like a shot of nostalgia for the inner lizard brain.

The idea of a group of mercenary low level super heroes & operatives using technologies that they barely understand. This trope  isn't anything new & might be something that I lifted from this blog entry ' From The Sorcerer's Skull' entry here.  The Big Jim P.A.C.K. line was really expansive & full of all kinds of potential & if we look into the Big Jim Wiki entry then we almost but not quite get a 70's version of Eighty Five's M.A.S.K toy line ;"In 1975, Mattel decided to create an extension of the main toy line making Big Jim the leader of a Mission Impossible-like group of heroes for hire. This series is easy to identify because all related products have a howling wolf as its principal image and character art by Jack Kirby. The members of the spy group were named P.A.C.K., which is an acronym derived from "Professional Agents – Crime Killers".[1]

On its initial release, the series presented Jim as "Commander", this time as the leader of a counter intelligence strike team. He and two of his most loyal friends joins forces to against a hooded villain known as "Zorak, the ruler of the Underworld".

The first Zorak action figure was named Double Trouble Zorak, because he had a face-changing feature where his normal-looking head could be turned into a monstrous green visage.

Two Big Jim action figures were relaunched to join forces against Zorak. One of them was Warpath (a Native American archer) who was previously released as Tankua. Seems like the main reason for the name change was the difficulty in pronouncing "Tankua" properly, and the need for a more dynamic name. Dr. Steel returned too, but this time as a hero and member of the P.A.C.K. A new character was added to the group, The Whip, a weapons specialist armed with a bullwhip. One year later, a new character named Torpedo Fist, (a former sailor with an artificial hand and forearm) was added to the team. In Latin America several parts of this figure in particular were split to create new Big Jim characters not released in the United States, as part of the region's version of P.A.C.K., named LOBO Squadron.

The Big Jim P.A.C.K packaging is amazing with the Jack Kirby & Marvel comics back packaging help & don't get me started on the Mexican figures beautiful packaging. Here's a great overview on this video on the whole cloth comic book.

Now this whole concept could be written off as me simply ripping of Trey Causey? But really there's more to it then that! I inherited my uncle's Wally Wood T.H.U.N.D.E.R. agents comic book collection. These comic books also got into similar super agents who were chosen to wield alien technologies that they barely understand. 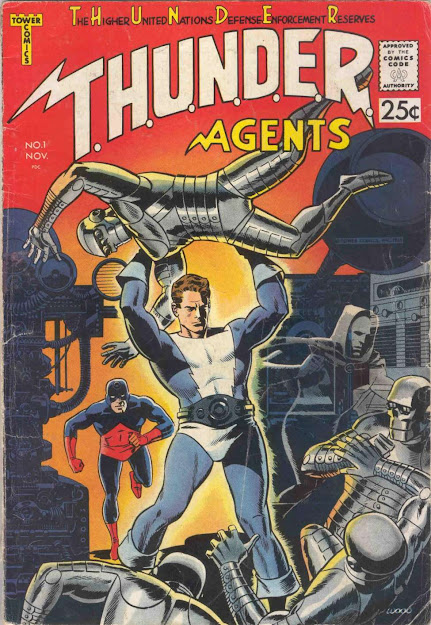 So where could these agents get their high technological gadgets & expansive powers?! Two areas spring to mind right off the bat. A lost world version of 'X1 The Isle of Dread' is perfect as lost dimensional location that phases into a modern Seventies Pulp  Earth. 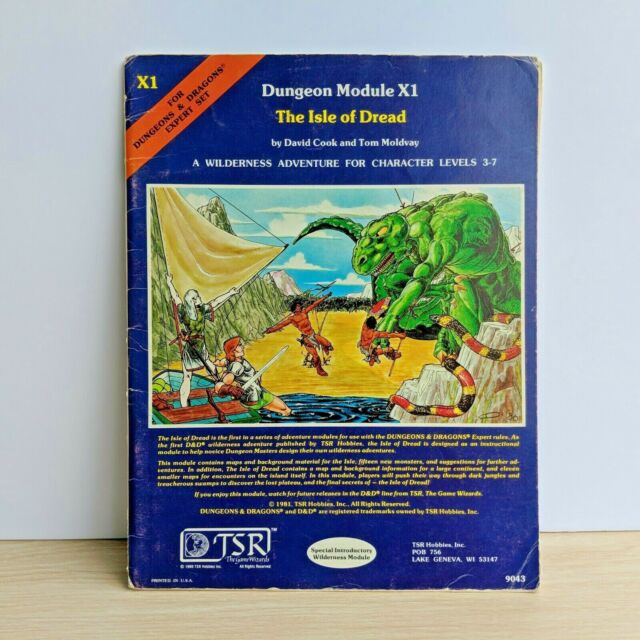 The second option is far more colorful & just as dangerous! Venger Satanis's Islands of Purple Haunted Putrescence. Everything from weird space craft to out & out cyborg wizards are here! These two combined could bring a campaign into very sharp focus.

But what's really an option is to bring the transcosmic weirdness of Cha'alt into the Pulpy mix as alien invaders reveal themselves to be the real power behind the whole cloth Pulp setting's machinations. 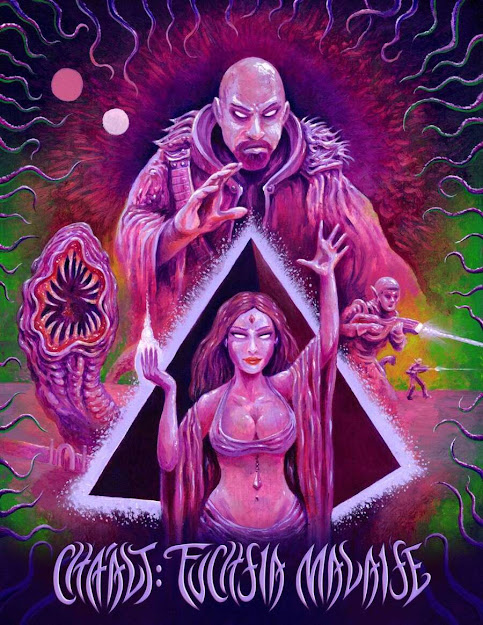 With the big players of Cha'alt: Fuchsia Malaise book revealed.  The offworlder high-tech facility called Elysium which is both faction & adventure goal is right up front with its villainy. These folks are literally Dune like world ravagers & these folks should not be taken lightly! They make excellent foils against the down to Earth adventurers of a faction like Big Jim's P.A.C.K.
How would I pull this campaign off?! Well that's where I'd use Mike Stewart's Victorious rpg for it! Its got all of the bells & whistles in place & could easily accomplish the whole thing rather easily. Given the 70's vibe its not hard to squint just a little to make this an alternative Earth.
Posted by Needles at 8:27 AM