Tonight its been one of those nights where classic 50's, 60's,70's, & even the 90's giant  monster flicks have occupied my thoughts with the release of King Kong Vs Godzilla film material with the first look. There's a bit of a big reveal folks on the video below & I was throwing down with Dangerville folks. Major possible spoilers in the video for King Kong Vs Godzilla. As G fan its a great time to be waiting on the film.

Its been one of those days where I find myself drifting back to thoughts about Ishihara Gōjin the incredible children's artist & illustrator from Japan. Going back to 2011 & an article by Cyriaque Lamar on Gizmodo the incredible artwork of Ishihara Gōjin came my way. This stuff is just great for a resource for an old school or OSR giant monster campaign! This inner Earth world might be the actual source of both the strange radiations & giant mutant monsters of the Mutant Future rpg!

According to the article;  "Gōjin Ishihara's profoundly weird children's art. In 1969. a Japanese magazine published these exceedingly intense depictions of life at the center of our planet. Taking cues from Journey to the Center of the Earth and The Lost World, these drawings and diagrams are the strange remnants of some plesiosaur-filled fever dream."
These children's magazine artwork are like something that a nine year old would be dreaming up. These would be perfect fodder for a Gamma World or Mutant Future rpg campaign. 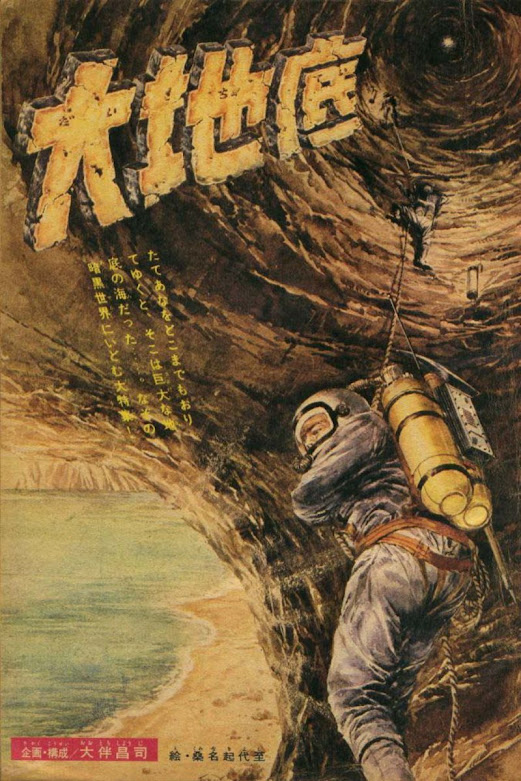 This is one of the most normal art pieces that I've seen. But the second one in the article is like something straight out of the classic Journey to the Center of Earth Verne book on steroids! And has a spin on the classic 'giant mushrooms at the center of the Earth trope. 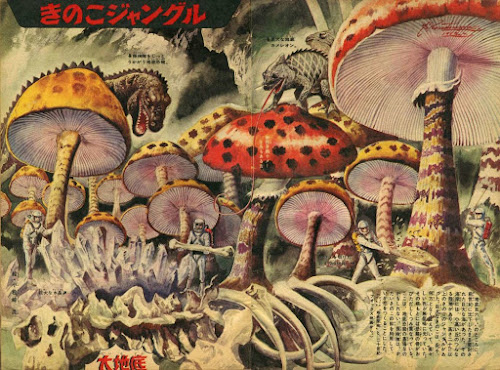 There is so much going on here that it reminds me of the classic Eighties cartoon 'The  Inhumanoids!' The Evil That Lies Within' another creation from the mind of Flint Dille from Eighty Six a line of toys,comic books & a very dark cartoon. This property was balls to the walls nuts!

This is  especially the second piece of artwork which references the magnetic anomalies pf the Earth's poles & center of the Earth as giant magnetic generator! Better hand onto that hand gun & your air tanks! 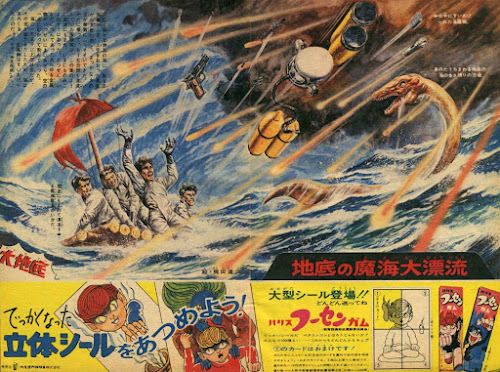 things really start to heat up with the lava rivers & fiery monsters that is normal for the inner world! There is so much to unpack in this piece of artwork from the bone fields to the full on river rafting down the lava! 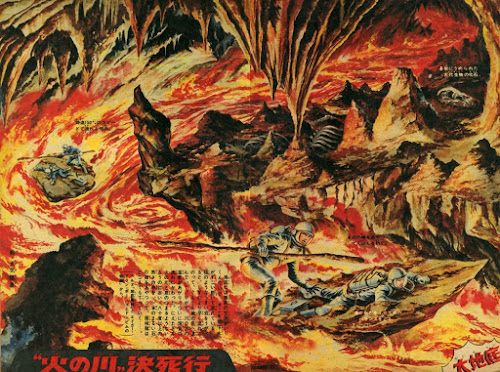 We get into the fire kaiju. salamander style mutant  antagonist in the final art piece that references both the Verne book 'Journey to the Center of the Earth'  & the classic Edgar  Rice Burroughs 'Pellucidar' stories!These elementally immune mutant monster species  reminds me of several Dungeons & Dragons monsters that we've seen over the years especially the  tarrasque. Those eggs pictured are going to be very valuable. But watch out for that hatchling! 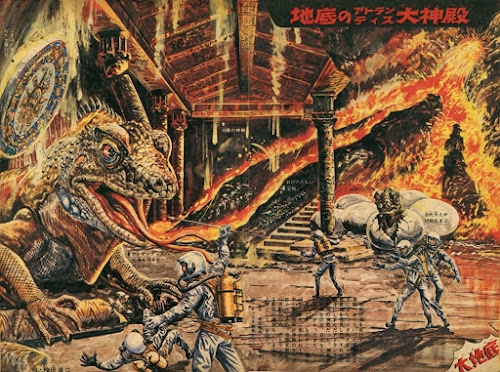 The next piece we get into the actual layout & locations of the inner Earth featured in the magazine article prime pieces for the enterprising dungeon master who wants to use these adventure locations! We get a bit of a layout for the inner Earth's diagram & possible physical locations. 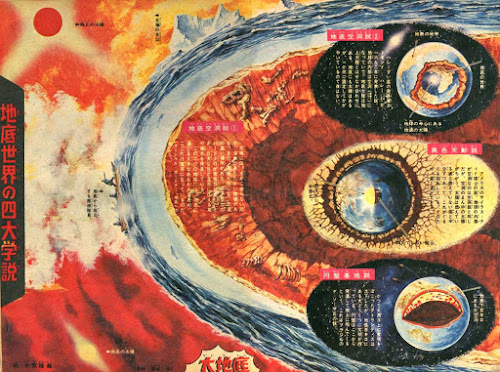 We get a Richer Shaver mystery style magnetic rail car system left over from the Ancients. This system seems incredibly dangerous to me & crosses the Earth at different points with the pictographs indicating a world spanning system. 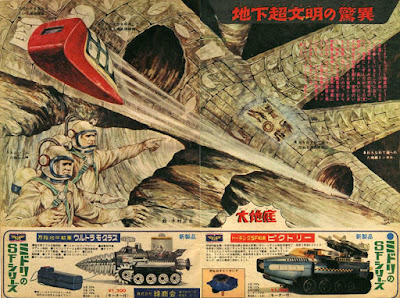 Finally we get one a spin off of the Mahar splinter colony with a mutant shoggoth slaves/servants. This is one of the most dangerous areas that PC's could find themselves in! So there is a such a great deal of material that Ishihara Gōjin packs into his art & material. 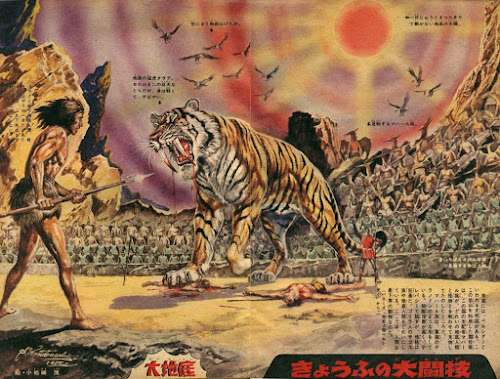 So besides using Ishihara Gōjin's artwork as inspiration for an old school campaign there's lots of gaming inspiration & adventure influence that can be had here. Now besides the obvious Gamma World/Mutant Future campaign material here. What I would do is take Ishihara Gōjin's artwork & go that extra mile with it. I'd take AC9 'The Creature Catalog' & use that source of an Inner Earth campaign. 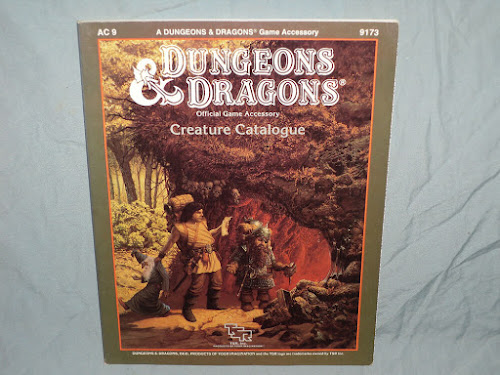 Add in Big Jim's P.A.C.K. which we covered last we & your ready to go with an off beat and very well done campaign jump off point. Take this whole cloth campaign & simmer with X1 'Isle of Dread' & your ready to run a complete campaign! 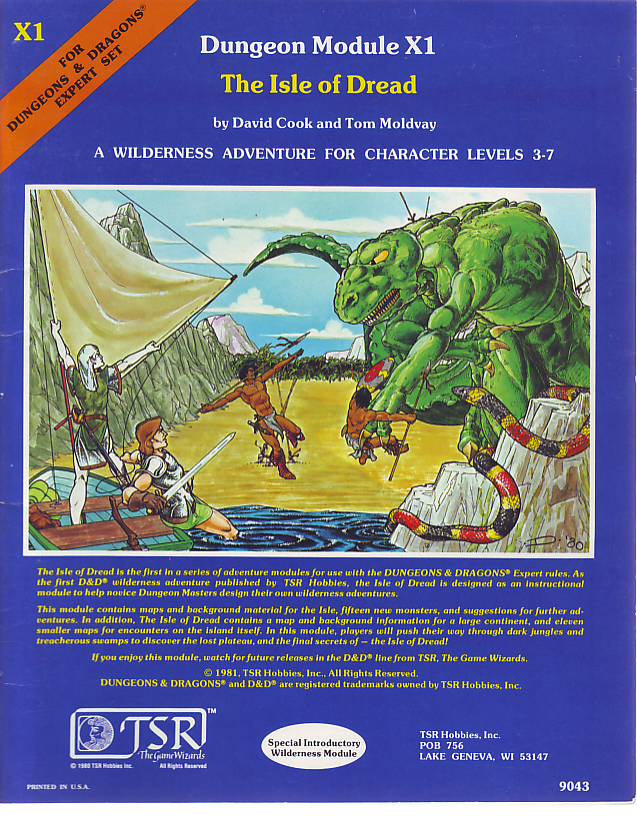 Add in a planar gate way or two to Carcosa & you've got one of the sources of every mutant monster & Kaiju induced mutation on planet Earth for ages to come! But let's say you want even more of a Lovecraftian tie in?! Well if we take Call of Cthulhu's 'Secrets of Japan' then we get a complete break down of Godzilla even though he isn't called Godzilla. 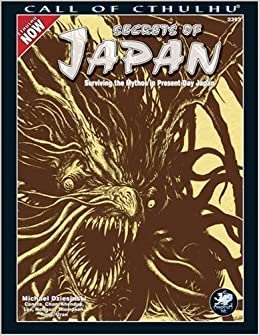 In fact this inner Earth sets up a complete Godzilla vs Cthulhu campaign setting from the ground up! We've got everything completely to explain every single Lovecraftian monster, mutant, and deviant from the ground up! This was a perfect set up from Famous Monsters of Filmland artwork by "Godzilla Vs. Cthulhu" artwork by Bob Eggleton! 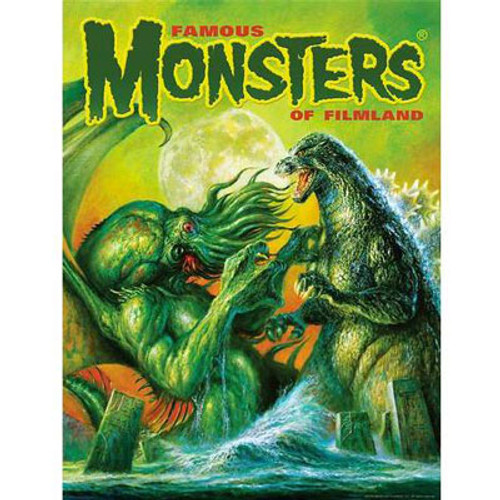 This is exactly where Goblinoid Games Realms of Crawling Chaos comes in very handy! The book literally can create scads of weird Lovecraftian relics & monsters at the drop of a hat! Really well done OSR book & perfect for just this sort of a campaign.