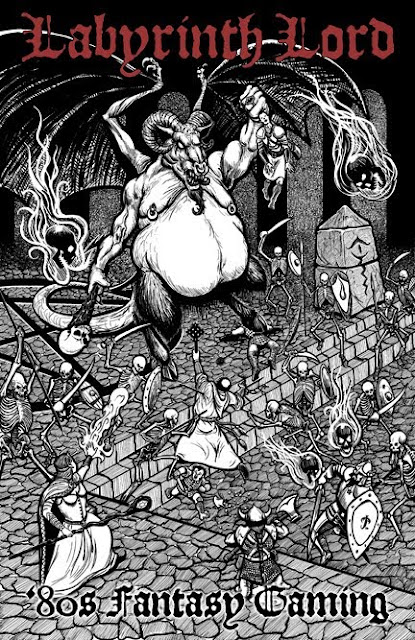 Recently I was able to buy  the complete run of Goblinoid Games Labyrinth Lord rules. I've been spending a bit of time re reading the retroclone system. The fact is that as good as I remember & one of the reasons why I got into the OSR in the first place. Just in case you don't know, "Labyrinth Lord (LL) is a fantasy role-playing game written and edited by Daniel Proctor and published by Goblinoid Games. It emulates the rules and feel of Dungeons & Dragons (D&D) using the Open Game License (OGL) from Wizards of the Coast. LL is based on the 1981 D&D Basic Set edited by Tom Moldvay, and its accompanying Expert Set by David "Zeb" Cook"

GRAB IT FROM
HERE 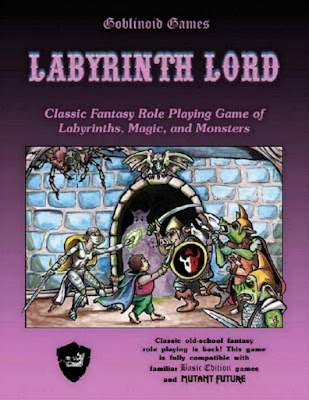 Yes there more modern covers for Labyrinth Lord
but I happen to like this one.
So one thing that Labyrinth Lord does is to take the OD&D limitations on level and simply does away with them. The wiki entry dives into this;"Any adventure written to be played with classic D&D can be run using LL with little or no adjustment. However, there are a few differences between the two games. It extends the rules so characters can advance to 20th level (the 1981 Expert set only included levels up to 14). In addition, the cleric class in LL can cast spells at first level, unlike in the 1981 rules." The retroclone system appeals to me because of the fact that you can use your old Dungeons & Dragons adventures with LL. The system is streamlined and open as well;"Goblinoid Games was the first retro-clone publisher to both make most content open under the Open Gaming License (OGL) and create a free trademark license with few restrictions. The material contained in the LL rules is available to others with few restrictions, allowing fans and other publishers alike to create their own derivative material for use with the system." Yeah, this is one of the reasons why I've stuck with Goblinoid Games products over the years

So while the latest OSR kerfuffle rages  Labyrinth Lord gets me back to basics. Since the Advanced Companion came out this retroclone system has been a favorite of mine.
Posted by Needles at 9:55 AM