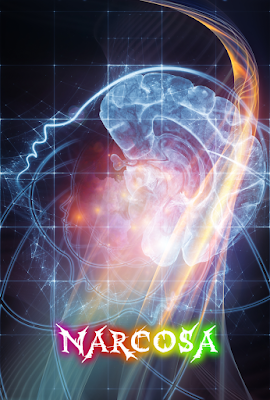 “The junk merchant doesn't sell his product to the consumer, he sells the consumer to his product. He does not improve and simplify his merchandise. He degrades and simplifies the client.” ― William S. Burroughs, Naked Lunch

Neo Plastic has been turning out some fantastic old school stuff for ages but its only recently that I've gotten around to downloading Narocsa. The book is part OSR campaign setting book and part send up of the Seventies drug counterculture that has always been a part of the D&D sub culture forever.
This book is actually a psychedelic fantasy trip down a rabbit hole of high weirdness and was a part of a community effort by some of the great OSR writers and designers out there. Once again I didn't know this setting and material was out there.
Its free and there's a ton of great drug induced madness to infect your old school campaigns. This product actually fills a niche that can be exploited by a DM when they need a pusher NPC or a seller of illicit substances for their campaigns with exploitable backgrounds that can be expanded into full psychedelic trippy adventures. And its done and written very well.
While tongue is planted firmly in cheek in this drug idled setting there's also a whole range of weirdness that can be exploited for your old school games.


From the Drivethru rpg blurb :


THESE ARE THE DAYS OF HIGH ADVENTURE!


Will you seek your fortune in Hashishastan? Will you gather the silk of the Mindmoth Caterpillar? Is it your destiny to join the Ecstatic Order of the Five Pleasure Plagues? Should you ingest those Troll Poppies?

Born of a hashtag, emerging like rainbow-hued smoke from the minds of dozens of creators, Narcosa is a crowdsourced setting book for old-school games.


Narcosa could be used as a one off adventure draw or as a stepping stone for a whole campaign of hobbit weed induced madness. 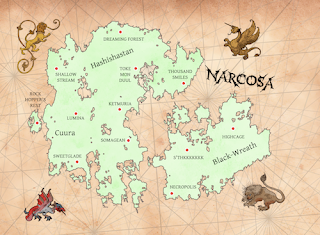 “In the City Market is the Meet Café. Followers of obsolete, unthinkable trades doodling in Etruscan, addicts of drugs not yet synthesized, pushers of souped-up harmine, junk reduced to pure habit offering precarious vegetable serenity, liquids to induce Latah, Tithonian longevity serums, black marketeers of World War III, excusers of telepathic sensitivity, osteopaths of the spirit, investigators of infractions denounced by bland paranoid chess players, servers of fragmentary warrants taken down in hebephrenic shorthand charging unspeakable mutilations of the spirit, bureaucrats of spectral departments, officials of unconstituted police states, a Lesbian dwarf who has perfected operation Bang-utot, the lung erection that strangles a sleeping enemy, sellers of orgone tanks and relaxing machines, brokers of exquisite dreams and memories tested on the sensitized cells of junk sickness and bartered for raw materials of the will, doctors skilled in the treatment of diseases dormant in the black dust of ruined cities, gathering virulence in the white blood of eyeless worms feeling slowly to the surface and the human host, maladies of the ocean floor and the stratosphere, maladies of the laboratory and atomic war... A place where the unknown past and the emergent future meet in a vibrating soundless hum... Larval entities waiting for a Live One...” ― William S. Burroughs, Naked Lunch


Narcosa has a myriad of setting possibilities within an old school post apocalyptic setting campaigns. The elements of Narcosa can exploit the inhabitants  of the wastelands as resources for further markets or perhaps the adventurers from the wastes are seeking out the wares of Narcosa.
Believe it or not there's a ton of things that can be done in a post apocalyptic setting with something like Narcosa. The material here makes for some interesting ideas with perhaps more then a trace of William S. Burroughs ideas & dash of Michael Moorcock.
On the whole Narcosa has its tongue planted firmly in cheek at points but there's more then enough here to get a gang of drug induced murder hobos exploiting their stash of material in the wastes.


Several of the relics, artifacts, and substances in Narcosa make excellent items as hooks for wasteland adventures by themselves & can add whole aspects to your games as your PC's are confronted with the twisted tri coloured high weirdness of Narcosa itself.
All in all I think that as a community driven tool box Narcosa succeeds on several drug levels of old school goodness that allows one to set the depth and gauge of the use of the elements of this community source book. Tune in, turn on, and allow the OSR weirdness to flow into your campaign.Grab It Right For Free