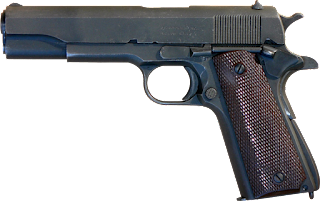 Each of these firearms has been painstakingly created from the bones and metals of the various demons and angels involved in the "Fall From Heaven". These firearms are often found within the armories of archdevils and various occult collectors of such things. Each one has been crafted from the finest metals, bones, and materials.
Each is a sterling example of a Colt 1911 fire arm and capable of taking out a minor godling, demon, or spirit with deadly accuracy. These weapons often seem to have minds of their own. Malevolent intelligence that whisper to their owners. Some are nasty and dangerous tools capable of leading their owners into situations of utmost danger. Often these firearms find their way into situations or pivotal moments of history. The ammo for these weapons is often made from the vary souls of the person or being using the weapons. Utmost care must be used when firing these weapons. They often carry a curse or streak of necrotic magic with them.
I have not used any game statistics so that they may be used in any game system.  Any angel or arch demon knowing that an adventurer who possesses such a weapon will be hunted down and their souls ripped from their vary bodies.