So recently I provided a bit of advertising for Venger Satanis's Trilogy of Awesome kickstarter, well today I received my review copy of Slaves of Tsathoggua From Kort'thalis Publishing & it wasn't at all what I was expecting!? First of all before the set up and plot work for this adventure you need to understand that, "this is the first adventure creates specifically for Crimson Dragon Slayer, edition 1.11.  However, it's compatible with the original Crimson Dragon Slayer RPG and relatively easy to convert to any other fantasy RPG." 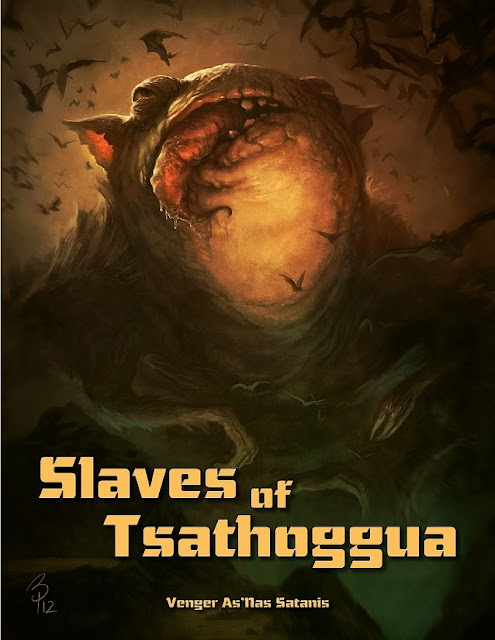 Otherwise everything after this isn't going to make a lot of sense, Slaves of Tsathoggua takes the idea of the 'beast in the cave' cliche & turns this into an adventure of weird proportions.
"There's something in that cave... the cave all those villagers are afraid of.  What's inside?  Will the adventurers be able to leave once they enter?  What does this have to do with Tsathoggua?" This adventure clocks in at fifteen pages and is filled with memorable NPC's, lots of weird situations, and a ton of strangeness that connects in deep with the latest incarnation of Crimson Dragon Slayer 1.11
From  Kort'thalis Publishing.
This adventure is a bit different then other Crimson Dragon Slayer affairs, it combines many of the author's usual themes but has something a bit different too it. Basically this adventure can act similar to a DCC funnel taking PC's from inexperienced yobs to fully fleshed and blooded adventurers in one shot. It uses a series of balanced and very dangerous encounters to really get into the psyche and gonzo pulpiness of the PC's who experience it. 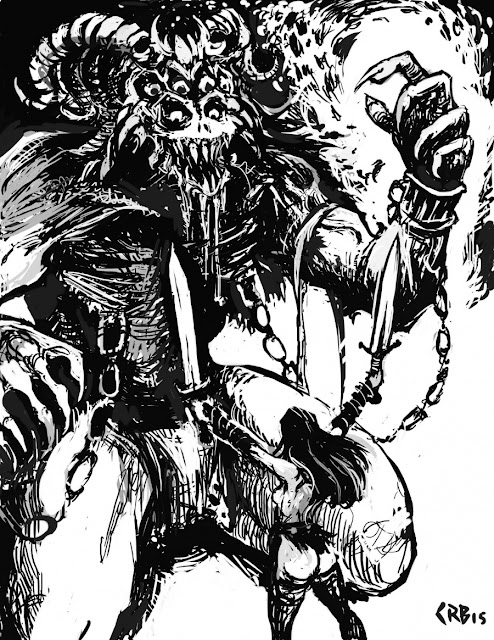 Slaves of Tsathoggua could be put between adventures in a campaign to test the mettle of adventurers from from the Crimson Dragon Slayer rpg system and it would do a good job of it. This adventure takes place in the village of  Needham is home to around 300 people. About half of them are farmers, the rest owning various shops like the baker or providing services such as the blacksmith.A short distance from the village is a cave & its hiding a secret of dangerous providence. This is Venger at his  best dishing out old school adventure with a dollop of pulpy gonzo aggression in equal measure. The stakes here are very high and in fact a bit epic for any party exploring the ins and outs of the Caverns. Slaves of Tsathoggua is a mix of Eighties sword & sorcery fantasy that has mated with an episode of the Outer Limits with a bit of Clark Aston Smith  thrown in for good measure but bring some extra PC's.  This adventure might be a great one to run with Dungeon Crawl Classics because everything here is a perfect funnel to throw some PC's through to take them from green horn to experienced in one shot. The fact that this is a Crimson Dragon Slayer adventure makes this a gonzo must  buy. 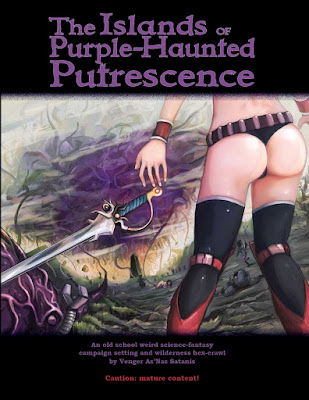