The wind is starting to blow & October is in full effect here in New England, so its time to get down into the depths of fantasy & talk about the Avon Fantasy Readers magazine. These wonderful little gems of a magazine were how some of the giants of sword & sorcery, horror, and science fiction got into the mainstream of literary society;"The Avon Fantasy Reader was a magazine (sometimes classed as a series of anthologies) which re-published science fiction and fantasy literature by now well know authors. Avon strived to bring readers little known stories by then little recognized writers such as H. P. Lovecraft, Ray Bradbury, C. L. Moore, A. Merritt, Murray Leinster and William Hope Hodgson. The Avon Fantasy Reader was published from 1946 to 1952 and had 18 issues in full."
The thing I loved about the Avon Fantasy Readers was the lurid covers, they had that weird Fifties science fiction/fantasy thing going on. The inheritors from the pulp magazines they were weird, strange, & had an almost but not quite air of respectability. So what's in issue #1? Well here's the contents -
Let's quickly talk about how these are some of the powerhouses of dark fantasy and that the Clark Aston Smith tale is worth the price of admission alone. Then add in the Shuttered House by August Derleth and the Voice Of The Night and Murray Leinster's Power Plant, & Nostalgia by HP Lovecraft. Well this issue is really a killer to have for planning out some old school fun. 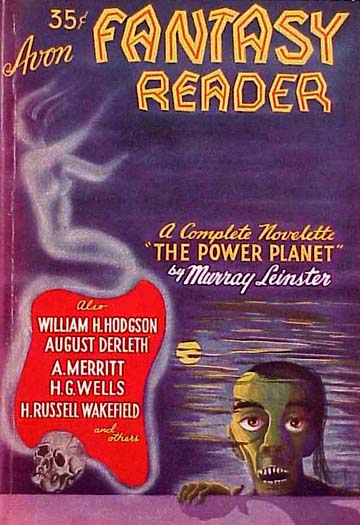 There's some really nice material here & its perfect to get an old school campaign off the ground. The authors are well known but not back in Forty Seven. This stuff was part of the basis for Appendix N for the Advanced Dungeons & Dragons First Edition Dungeon Master's Guide and many kids first exposures to the seminal works of these authors.
GRAB IT RIGHT HERE
Posted by Needles at 9:40 AM