Anatomy of The Morlocks For Your Old School Campaigns 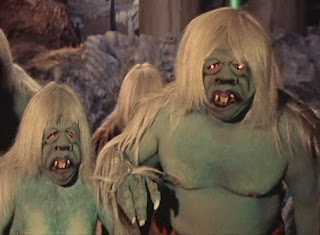 Last night I visited with friends and had a very eye opening conversation with another  rabid fan of H.G. Wells. It was quite eye opening on the subject of the Morlocks.Lately I've been revisiting Mutant Future and mixing it in with Advanced Labyrinth Lord, one of the more iconic monsters that's been featured in Mutant Future is HG Well's Time Machine's Morlocks. Mutant Future designates them as a Chaotic race of mutants and they are are as we shall see. The Morlocks exist within a caste system that has been artifically created over eons. When I think of Morlocks George Pal's wonderful film springs to mind.

When I think of the Morlocks I think of the iconic George Pal's 1960's Time Machine and they're depiction on screen as one of the more dangerous of the mutant cannibal races that operates in the wastelands. According to the Mutant Future Wiki these grunts gain the following mutations albinism, intellectual affinity (tinkerer), and thermal vision. And these beings are known to keep albino apes as pets and attack dogs. There are reasons for this affinity and we'll get to that in a moment. 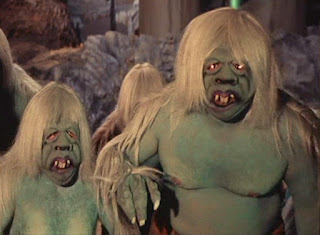 How the Morlocks are put together reveals as much about their origins as it does there intended original  purposes. The Morlock race  has been defined by Wiki as; "The Morlocks are at first a mysterious presence in the book, in so far as the protagonist initially believes the Eloi are the sole descendants of humanity. Later, the Morlocks are made the story's antagonists. They dwell underground in the English countryside of AD 802,701, maintaining ancient machines that they may or may not remember how to build. Their only access to the surface world is through a series of well-like structures that dot the countryside of future England.
After thousands of generations of living without sunlight, the Morlocks have dull grey-to-white skin, chinless faces, large greyish-red eyes with a capacity for reflecting light, and flaxen hair on the head and back. They are smaller than humans (presumably of the same height as the Eloi). Like the Eloi, they are significantly weaker than the average human (the Time Traveller hurt or killed some barehandedly with relative ease), but a large swarm of them can be a serious threat for a man alone, especially unarmed and/or with no portable light source. Their sensitivity to light usually prevents them from attacking during the day. The Morlocks and the Eloi have something of a symbiotic relationship: the Eloi are clothed and fed by the Morlocks, and in return, the Morlocks eat the Eloi. The Time Traveler perceives this, and suggests that the Eloi–Morlock relationship developed from a class distinction present in his own time: the Morlocks are the working class who had to work underground so that the rich upper class could live in luxury. Their cannibalism is explained by the extinction of other sources of animal protein."
In the Mutant Future Wiki's universe the officers are upper strait of Morlock society, combat empathy, increased strength, intellectual affinity (martial), and [1d3-1] positive physical mutations.These are the most dangerous of foot soldiers and are rarely seen at all. They will be seen in communities with sixty or more individuals. "Do to their brutishness and simple skin clothing - if any - most people consider them primitive and simple-minded, but they are proficient engineers, and they and have an affinity for technological items, which they will employ whenever possible." This caste produces some of the most dangerous and technologically innovative engineers,thinkers, &  scientists. This description of the soldier Morlocks made me think of the illustrations of William Thresher and Skirmisher Publishing's card stock characters. 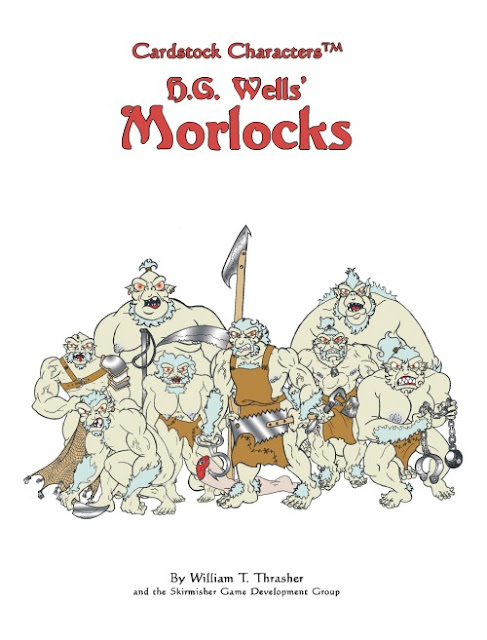 Make no mistake but the Morlocks are one of the most dangerous of foes to run across in old school campaigns but where did they come from? Well the Morlock's origins actually echo through another HG Wells novel. When the Sleeper Awakes (1910) is a dystopian science fiction novel by H. G. Wells. In a nutshell according to wiki; " Its about a man who sleeps for two hundred and three years, waking up in a completely transformed London, where, because of compound interest on his bank accounts, he has become the richest man in the world." Within the novel our main character Graham visits a corrupt  future London where he encounters the real workers who keep this society going according to wiki;"
His carefree life soon comes to an end when a young woman named Helen Wotton explains that the people are suffering as badly under Ostrog as they did under the White Council. For the lower class, the revolution has changed nothing. Inspired by Helen's words, Graham begins to ask Ostrog questions about the condition of the world. Ostrog admits that the lower classes are still dominated and exploited but defends the system. It is clear that Ostrog has no desire to change anything, that the revolution was merely an excuse to toss the White Council out and seize power himself, using Graham as a puppet. 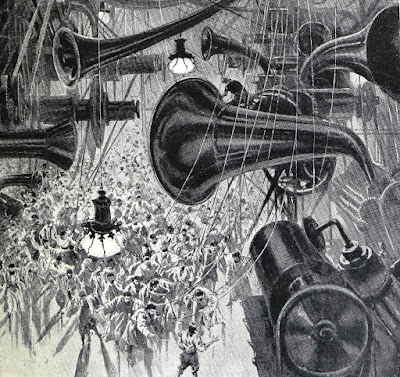 After pressing Ostrog, Graham learns that, in other cities, the workers have continued to rebel even after the fall of the White Council. To suppress these insurrections, Ostrog has used a police force, Black Africans recruited from Senegal and South Africa, to get the workers back in line. Graham is furious to learn of this and demands that Ostrog keep his police out of London. Ostrog agrees and promises to help Graham assume direct control over the world's affairs. Meanwhile, Graham decides to examine this new society for himself.
Graham and a valet travel through London in disguise and examine the daily life of the average worker. London is portrayed as a dehumanized, industrialized quagmire caught in perpetual darkness. The lower classes are forced to work day and night in the factories, having nothing more to look forward to than some cheap amusements. As he examines this grim scene, Graham learns that Ostrog has ordered his troops to London to disarm the remaining revolutionary workers.
The workers rise up once more and Graham makes his way back to Ostrog, who attempts to subdue Graham. With the help of the workers, Graham escapes Ostrog. He runs into Helen who, it is revealed, was the one who learned about Ostrog's treachery and made it public. With her by his side, Graham oversees the liberation of London from Ostrog."
These workers are already evolving into the Morlocks and showing signs of having lived their lives below ground.Some of these workers are actually foremen whose mental acuity is quite strong and have a certain cunning about them. These are the leaders among the Morlocks, the so called Warlocks. Whom according to Mutant Future Wiki  have the following mutations albinism, intellectual affinity (tinkerer), thermal vision, 1d4+1 mental mutations. But why? Well, because the White Council has been tinkering with their genes for centuries, the Morlocks are not a 'evolved' race at all but an engineered worker, soldier, and leader caste of humans  perfectly suited to take full advantage of the underground world that has been made for them.  The world of HG Well's future history is not our world at all. The capacity of the Morlocks to survive and thrive under adverse conditions is something we've seen in movies, television shows, and more across pop culture. Wizards and mutant overlords have for centuries been using this cannibalistic species for assassination, as engineering for their super science projects, and more. This has lead to the spread of this verminous species across the various alternative Earths. They're use of carnivorous apes hearkens back to the artificial nature of this species, they're intelligent cunning and very dangerous. Morlocks are one of the most underestimated mutant species in the wastelands. 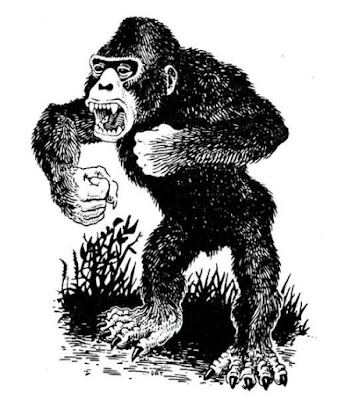 This is an alternative history timeline option  and the use of artificially engineered cannibalistic races is something that we've seen in old school campaigns plenty of times with the introduction of the Grimlocks in the Fiend Folio in 1981.
The Grimlocks are very, very, dangerous and described in the Fiend Folio as "fierce subterranean humanoid warriors" with "blank and sightless" eyes, "thick, grey skin", "usually clad in dark rags", with "particularly white and sharp" teeth who were hard to detect when they were motionless"  Grimlocks are a race that has been artificially created from the Morlock genome and has been used expensively through out the various dimensions and alternative Earths.

Grimlocks are the perfect foils and workers for the grunt Morlocks to boss around, they're easily directed and are a very hardy caste. They're also far more passive then the more intelligent Morlocks upon which their based.
"Unusual characteristics of the grimlock included the ability to "see" using their other senses to a distance of 20 feet, a corresponding vulnerability to spells that caused auditory hallucinations and thus disrupted their "sight", a very high rate of movement in combat—twice that of a normal human—and extremely thick skin that was the equivalent of fairly good armour. These qualities plus the fact that they would be encountered as a mob of anywhere from 20 to 200 made them a formidable opponent for the average party of adventurers. The grimlock was said to be able to occasionally cooperate with medusae, since their blindness made them immune to the medusa's gaze. The illustration, presumably by Fiore, shows a group of snarling, muscular humanoids that resemble long-haired Neanderthals with shark-like teeth."
Given their worship of the evil extra dimensional entity Klagg by the Grimlocks we can rest assured that the spread of the Grimlocks will  continue. There have been incidents of the Grimlock rising up against their chaotic masters but this seldom happens. The whips of the Morlock keep tight reign on them. So be very careful before venturing down into the underground world of the Morlock, you might be in for far more then you expect. 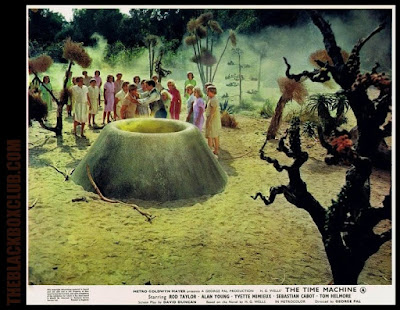 This blog post is for educational and entertainment purposes only, any of the game company's mentioned here are not responsible for any opinions expressed here. This post is not an attempt to violate the trademarks of the holders of the 1960's Time Machine movie. This is the ramblings of a fanatical fan of  the film, HG Wells, and old school games.
Posted by Needles at 9:53 AM