Welcome back kiddies, your uncle Eric is back with another free OSR resource and yes I can hear the groans from here. Not another optional resource to the classic sandbox lost world  island adventure. Well in a word, yes I happened upon a free adventure resource to lure back your adventurers back to the island again with a great hook. All the way back on March fifth I spoke about getting your adventurers to explore around the islands in the sea of Dread.
Let's take the classic back panel text from this classic adventure for a moment; ""The characters somehow find a fragment from a ship's log, describing a mysterious island on which many treasures can be found, and set out to explore it. Typically, the characters will first make landfall near the more or less friendly village of Tanaroa and after possibly dealing with some troublesome factions in the village, set out to explore the interior of the island. In the course of their explorations, they may find a number of other villages of unfamiliar intelligent creatures, numerous hostile monsters and the treasures they guard, and a band of pirates. Many prehistoric creatures, including dinosaurs, are prominently featured, especially in the original printing of the adventure. Near the center of the island is a hidden temple inhabited by monstrous, mind-bending creatures known as kopru; the characters may stumble across it or learn that it is a source of problems for the other inhabitants of the isle, and the climax of the adventure typically consists of the characters exploring this temple, battling its inhabitants, and uncovering its secrets"

GRAB BENEATH THE
ISLE OF DREAD ADVENTURE HERE 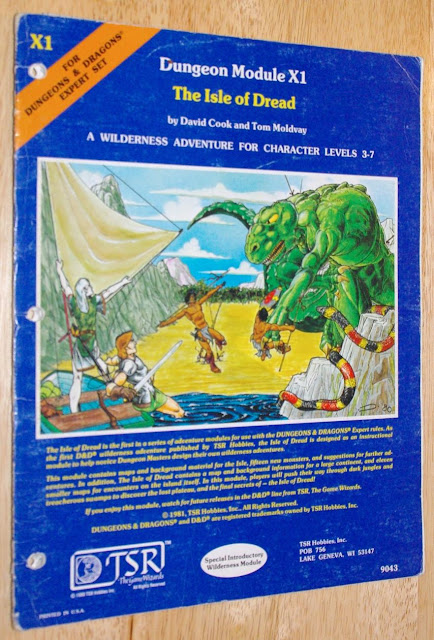 Near the center of the isle is a temple which is controlled by the weird Lovecraftian Kopru and that's exactly where Below The Isle of Dread picks up. "The Isle of Dread has some caverns on level three unmapped, with the note “so the DM can create his or her own special encounter areas”. I have to say, this is special. What’s going on, though? I’m guessing I knew at one point, although the complete lack of writing throughout the dungeon may belie that assumption. The dungeon appears to be old.* It appears to have both human and Kopru skeletons. There are lots of rock and crystal statues, and at least two quicksilver statues, giving it a sort of ancient technology feeling. This was well before Terminator, let alone the sequel’s liquid metal android. The feeling is increased because I seem to be treating the statues as robots, most of which are no longer in service." So what your going to get is a free six level sand box style dungeon ready to be customized and perfect for play to draw your PC's back to the isle with your own creations. The adventure clocks in at twelve pages of old school dungeon crawling fun for the David "Zeb" Cook and Tom Moldvay, Expert D&D set. This makes the adventure perfect as an excuse to get the PC's back onto the island and into the sights of some the prehistoric monsters and lost races waiting to meet and greet the PC's.

Races like the Phanaton who are a halfling-size race resembling racoons or monkeys, with prehensile tails and wing-like gliding membranes and can have a mean streak a mile wide. These guys are one of the factions that makes X1 rather unique. The sandbox approach makes the factions stand out and really gives the players some rather interesting challenges. It also gives the DM a blueprint for creating their own factions for later sandbox adventures. The real question is how will the dungeon beneath the isle change the climate and reactions of these factions especially the pirates if they're still are any around. Most likely some sea scum will come and replace those whom the earlier exploits of the PC's have sent to their just rewards. 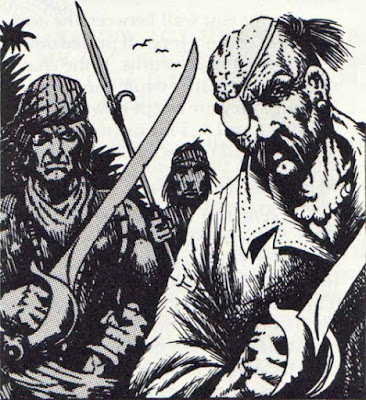 There are also several other aspects that the Isle of Dread added to the D&D Expert set roster these included; the fact that the adventure " introduced numerous creatures to the game for the first time, including the kopru and aranea, both of which went on to find a place in the Third Edition Monster Manual; the rakasta and phanaton, both of which would later appear as playable races in other Dungeons & Dragons products set in Mystara; and many others, including several types of dinosaurs." The dungeon master could take full advantage of this fact by introducing factional NPC's for this dungeon if they are inclined. The DM could introduce newer factions who have risen in the wake of the PC's freeing of the tyranny of the kopru horrors or the rise of this evil again. Another option is to have this adventure act as a prequel to the events of the Isle of Dread adventure. 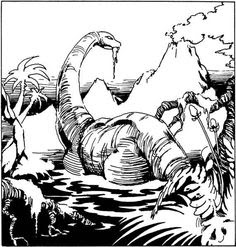 One of the ideas that came about after having a conversation with some other old school buddies of mine is the fact that some parts of the isle transcend time and space there time space gates scattered here and there. There are other versions of the island connected with these gates scattered in the dungeon and other hidden parts of the primordial jungle. Add in some weird science or alien technology bang your ready to go for a jump into your next favorite OSR retroclone lost world setting. This could be used to act as a bridge with games such as Astonishing Swordsmen and Sorcerers of Hyperborea.The Manual of the Planes for fourth edition places the island as a location in the Feywild (a parallel plane dominated by faeries and unspoiled natural life. Shrug this might work for some campaigns but personally I like the fifth edition option which according to wiki; "The D&D 5th edition Dungeon Master Guide (2014) places the Isle of Dread in the Plane of Water, though it mentions that the island has the ability to appear in the Material Plane" Are any of these true? I think that to some extent they are all true with the isle having many different versions existing across space and time causing all kinds of mayhem for players.
"The adventure was loosely based on King Kong,[1] and came with a fairly detailed (for its time) map of a setting then called the Known World,[1] showing at least fifteen distinct nations on the mainland to the north, as well as much of the Sea of Dread in which the Isle of Dread could be found.[4] These nations each received a paragraph or so of description near the beginning of the module" This fact unto itself allows the DM to customize the Isle and its inhabitants plus the surrounding areas as they see fit and brand it as an alternative version of the Known world. So how is this possible? Well there might artifacts from the original inhabitants of the isle and the magic is still leaking into the reality of the island itself.
Want a map of the island that you customize yourself? We've got you covered with these downloads from http://pandius.com. In the end X1 Isle of Dread remains one of the classics for a number of reasons and favorite of mine. Below The Isle of Dread By Jerry Stratton adds just another modification to a classic of Dungeons and Dragon Expert era. Happy gaming and watch out for the dinos!
Posted by Needles at 10:18 PM