The postman brought me a copy of  Beyond The Silver Scream by  Forrest Aguirre
on Saturday. The book is a very clever slight of hand take on several Eighties horror  cliches  and transforms them into a clever zero level funnel. I got a physical copy of the book from Forrest himself and really was excited to get this book. This is a zero level funnel and you're going to need the Dungeon Crawl Classics book to use this material properly.
So grab some quarters from your dad's change tray, score a ride, reach for your Members Only jacket, and get your Walk Man ready its time to journey into the Silver Scream! YOU CAN GET THE PDF RIGHT OVER HERE 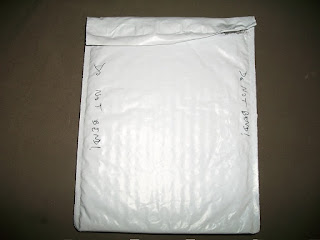 The basic premise for this funnel is a reworking of the usual Dungeon Crawl Classic tropes of taking four or five base level PC's and running them through the DCC gauntlet of adventures to see who survives the Eighties horror movie fun. It takes this idea and twists it into the DCC mold with some pretty damn nice style.
"Welcome to Beyond the Silver Scream, a Dungeon Crawl Classics RPG-compatible 0-level "funnel"! Players begin as high school kids in the mid-'70s - early-'80s who go to the local seedy theater to catch the premiere of the new horror flick "Screaming Sorority Girls from Planet Playtex". But the horror isn't confined to the screen! And the special-effects are all-too-real. So take a seat and brace yourself for an adventure where the director isn't the only one doing the cutting!" 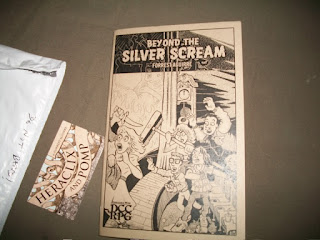 A word about the psychical product, this booklet clocks in at thirty six pages of high class card stock with some very solid paper. It actually feels nice in your hands and doesn't feel as if its going to come apart at the gaming table. This is pretty damn important for the fact that I don't want a product from a small press producer to fall apart. This one won't! Its well made and well done. 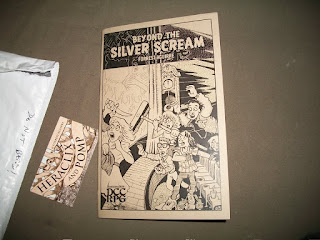 The graphics are crisp and well done, the artwork evokes the fun and nostalgia of that era with a very defined sense of the absurd but make no mistake this a deadly funnel if there ever was one with a few twists thrown in. The NPC's are nasty pieces of work and there's plenty of room for DM customization in the meantime. Forrest does a good job of setting the stage and then taking the action to the next absurd level of DCC horror here. But this funnel does it very well and the author knows his source material very well. 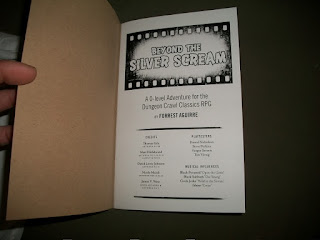 Here we're taken on a journey into the heart & soul of Eighties horror with more at stake then your mere flesh and bone. Your PC's very existence is defined by the events in this adventure and wrung though a whole host of weirdness to see if your DCC PC emerges from the other side. Did I mention that this happens to be very twisted stuff but done very well. The adventure takes the 'victims' and transforms them into a pile of gore or a horror forged hero ready to take on the worst that DCC has to offer and that's saying something. 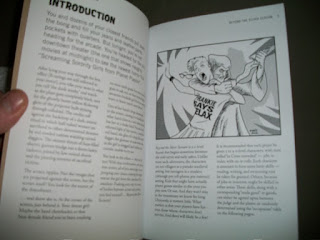 The adventure funnel walks the razor's edge between parody and high weirdness with a special brand of the odd just bubbling under the surface. What emerges is a PC that could be ferreted over into cultclassic or post apocalpytic Eighties fueled campaign. This adventure made me think of Venger Satanis's Crimson Dragon Slayer in a good way. In fact with a little bit of work the dungeon master could transition they're PC's right over to a DCC fueled Thule with very little work and that's a good thing in my humble opinion. 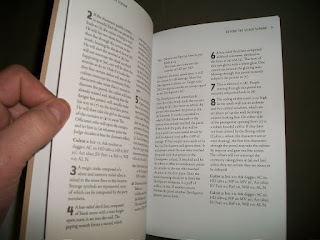 There's more here lurking in between the pages as well, there's a brand new patron set along with spells but your wizard's are going to have to tread carefully in this one. The material here is both homage and love letter to Eighties horror and a very twisted take on a great idea. Do I think its worth the cash? Yes! Can you get a physical copy from Forrest himself    and follow more of his twisted musings right over here. 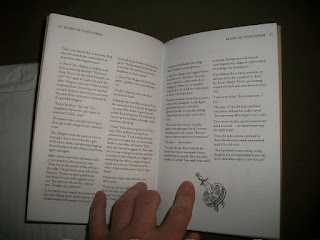 The bottom line is that this book takes the idea of the DCC funnel and turns it out on its head and its a pretty damn fine take Eighties horror and turns it into an original idea while forging your PC's into horror bad asses ready to take on the worst of Dungeon Crawl Classics. Five out of five. 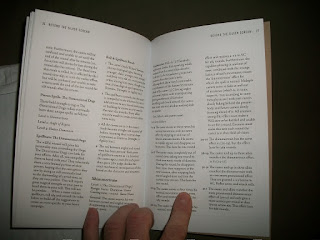 Grab it today and take your DCC game in a new direction today, I haven't write a whole lot of details because I don't want to spoil some of the twists and turns that the author has brought to the gaming table. This is a nice twist on the usual funnels that I've seen used in DCC.