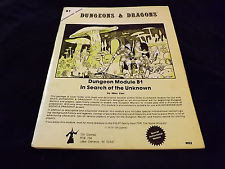 B1 In Search of the Unknown is sort of the red headed step child of classic modules, it has a bit of a reputation among certain circles of gamers and I personally don't think its warranted at all. You can customize it as you like it and that's exactly what we're going to talk about today. I've written about B1 extensively before but today we're going to talk about something a bit different. That is using modern system agnostic add ons with classic D&D modules in this case B1 In Search of the Unknown. The basic plot of the adventure goes something like this according to Wiki ; "Many years ago two wealthy adventurers, Roghan the Fearless and Zelligar the Unknown, built a hidden complex known as the Caverns of Quasqueton. From this base, they conducted their affairs away from the prying eyes of civilization. While of questionable ethical standing, the two drove back a barbarian invasion and gained the support of locals. Eventually, they gathered their own army and went on an expedition against said enemies, where they met their demise."
The really nice part about B1 is that its most notable feature is that the monsters and treasures need to be keyed by the dungeon master so this makes customization a snap but it also means that In Search of the Unknown can be used with the retroclone system or B/X clone of your choice. 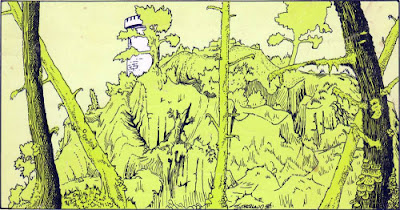 About a month ago I ran some friends through B1 In Search of  The Unknown, I ran through the resources for the module on Dragon's Foot and then I received a pdf from the folks over at Skirmisher Publishing at the same time that I ran my players through this module. One of the the things I did was spice up a secondary quest into the infamous wizard's tower with some of the material from 100 Oddities For A Wizard's Tower. This is the version that Shadow Shack had posted many moons ago as part of an ongoing project.
I owe that man a beer because his work has been a tremendous help in playing around with the expectations of my players. You can check out more of his work right over here.

So what's this all about? Well, the tower offers a further little piece of adventure after the players think that they have cleared out the rest of the dungeons, the castle ruins, and dealt with the monsters of the depths of Roghan the Fearless and Zelligar the Unknown's abode? Well because many system agnostic systems are designed to seamlessly slide into the adventure without giving the players a clue. Here's a good example of the sort of encounter that will keep players guessing;"A locked hatch in the floor leads to a subterranean pit that houses a vitriolic slug. The
alchemical creature consumes the output off all the tower’s drains, which empty into the
pit through a series of pipes. The pit is small, reeking of acid, rot, and human waste. There is an equal chance the slug is recently fed and docile, or hungry enough to attack." Suddenly that giant slug that appears in the random monsters isn't such a simple and quick encounter. And really that's what this partially is all about creating a new and slightly dangerously horrid encounter experience. 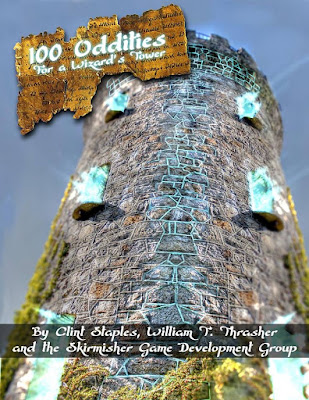 Basically this is a kit that allows you to put together a tower from the ground up making it a perfect compliment to the material in B1 and it adds another lay of play to this old school classic. The laying of material in rooms will have the players coming back again and again to rooms for both the unexpected finds, the treasure, and added weird factor.
Take for example a simple gaming board alright its anything but simple;"An elaborate game board, with courses of interwoven worms of onyx and jade, rests on a small table, with a black chair on one side and a green chair on the other. If one sits in the black chair, the onyx pieces will appear, and if the green chair is occupied then the jade pieces will appear. These pieces will appear in the midst of some unknown game, with several having been “taken” and with the missing pieces nowhere to be found."  It kinda slides right into the background of the adventure itself and makes a nice statement without screaming that the DM has modified this classic. And that seems to be a hallmark of just this sort a product that you're going to want to use with your classic adventures. 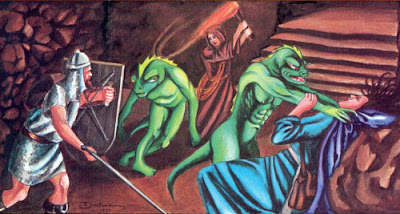 The Caverns of Quasqueton  are the perfect venue to try out some of the added on OSR systen goodness and the thing about B1 is how flexible and adaptable it is. And this is where I think the sweet spot is for these sorts of products the fact that they can be cycled through without players having a clue about how your messing around with some of these classics.

I also think that modules such as In Search of The Unknown are perfect venues to introduce new players to dark fantasy and other systems as well. Dark Albion and Lamentations of the Flame Princess are prime examples of retroclones systems that can easily be adapted to these classic adventures such as B1. As always though your mileage may vary.
Posted by Needles at 5:25 PM

Email ThisBlogThis!Share to TwitterShare to FacebookShare to Pinterest
Labels: 100 Oddities For A Wizard's Tower, B/X D&D, B1 In Search of the Unknown, Retroclone Adventures Resources, Retroclone systems, Skirmisher Publishing