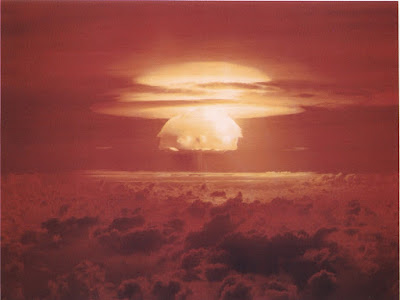 Need an old school campaign setting that has that Fallout feel but takes a completely different course of events. A sand box setting where 'The Bomb' has created the perfect Fifties science fiction movie parameters for mutants, mutation, and all of the venues of Americana old school mayhem? We've got you covered with Ace comics from the Forties & Fifties. Ace according to Wiki was; "Ace Magazines[1] was a comic-book and pulp-magazine publishing company headed by Aaron A. Wyn and his wife Rose Wyn. The Wyns had been publishing pulp fiction under the Periodical House and A. A. Wyn's Magazine Publishers names since 1928, and published comics between 1940 and the end of 1956"
They published a really weird atomic bomb exploitation comic book called Atomic War!.
Atomic War! was published between (#1 Nov 1952 - #4 April 1953) - under Ace Periodicals / Junior Books imprint and it would scare the hell out of kids with post apocalyptic nightmares for years to come. Which means perfect fodder for your old school campaigns! 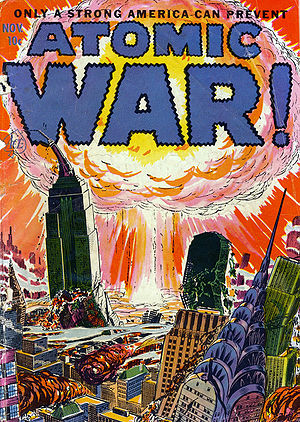 Last year I did a series of posts about a free series of post apocalyptic comic books from the Fifties and today I was speaking with a friend if I had done anything with those books or the ideas I put down in the blog about them? Well the answer to that was of course no but lately I've been on a post apocalyptic streak of gaming again fading back into the backdrop of the OSR again.
Atomic War series was from 1951 through 1953, this series featured some damn striking cover artwork with the tagline " Only A Strong America Can Prevent  Atomic War " under the melting gaze of a A bomb mushroom cloud set under a melting New York City. This issue lives up to the cover in the first story with the horrors of  Sneak Attack detailing a surprise attack on New York and the use of strategic nuclear weapons to overcome the Communist forces
GRAB ISSUE ONE RIGHT HERE 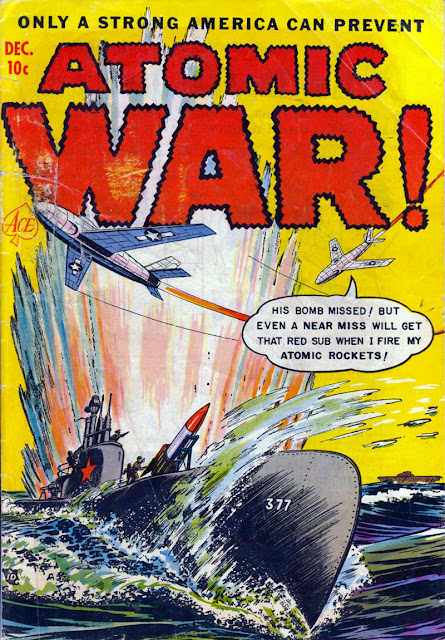 There is a solid narrative story line of events in issue one with Berlin Powder Keg following closely or happens along side  to the events depicted in Sneak Attack. Operation Haystack dovetails into the events of this issue and then builds upon the next story called Counter Attack.  The next issue continues the Atomic warfare action with Operation Vengeance. The Icebox Invasion is what happens when the Russians attack Alaska. The whole thing isn't pretty and they're is plenty of room for dungeon master customization. The spy From Coney Island details a Communist spy on the fringes of society. While Mission Demolition depicts events in Europe. This issue features plenty of retro technology action.

You Can Download Issue Two Right Over HERE The retro future vibe of these comics is so strong that it hurts in places but these comics are from a different time period so there is very little BS politically correct stuff in these pages. If your offended remember this is 1952.  Issue Number three gets into some hard turf with Commando Cracker Jack where the events of the fall of London has happened and a crack team of soldiers is dealing with the events in Europe. There is some very cool retro tech in this story and there's a ton of background detail that can help to fill in an old school post apocalyptic campaign with little issue. Log of the Snorkel Pack depicts an America reeling under an attack from Russia and the ruins of New York. This is a prime place to let loose your old school mutants and adventurers from an alternative time track or Earth. This story depicts some alternative versions of battles up and down the East cost.
The Invaders features some very interesting material from another area of the Atomic battle front. This is a very limited nuclear war in some regards. Almost a mix of World War II and the echoes from the Korean war as it sets the stage for the next battle called Slash By The Iron Greyhounds. This story features warfare  on the battle fields of Europe  and some great all tank warfare as well as the usual mix themes that build upon themselves. 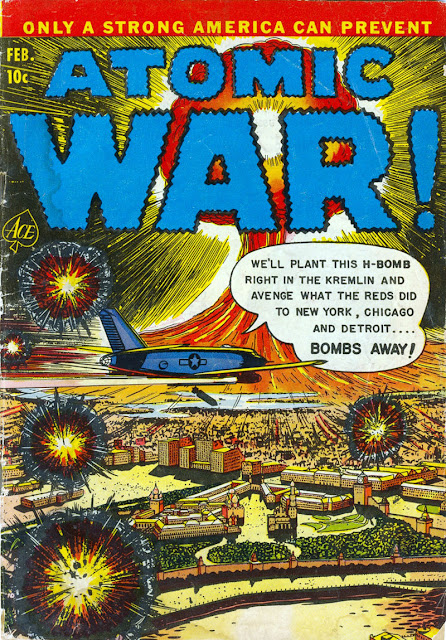 Issue Number four features a solid continuation of the Atomic war story line. The Artic Assault features some Fallout style jet planes and some weird bases too. The story is bloody and very violently grim stuff. Old Timers Die Hard continues the war as things move to the tropics. Operation Satellite depicts the stalemate around the globe at this point and the fact that the West's scientists haven't been able to develop a new super science weapon to break the back of the enemy. Here we've got a Russian style underground missile base worthy of a James Bond movie villain. A great location to set a dungeon wasteland crawl. Peril of Ploesti has submarines and weird war action in the middle of the series. 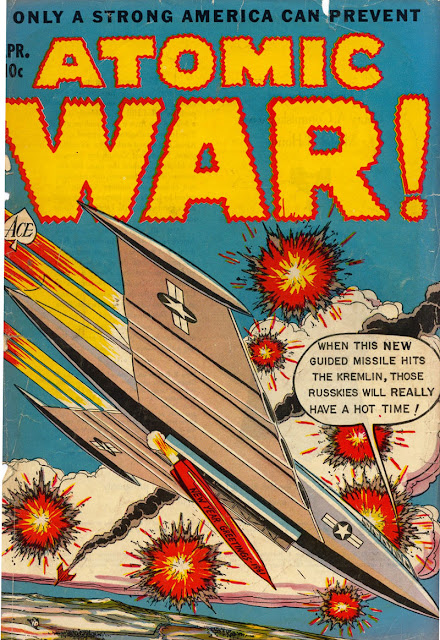 There are three reasons why comic books like Atomic War are easy to use and are continually sought out by dungeon masters. Atomic War outlines events of its conflicts, battles, atomic war weirdness throughout its four issue run. This makes setting adventures around, during, and after those events quite easy.  The battles of Atomic War are on a smaller scale then the missile launching nightmares that we've come to see in entertainment, history, and Hollywood. This is a comic book reality and as such not subject to the bounds of logic or reason. This is a mix of the Korean conflict era & the twisted brand of Ace Magazines atomic age weirdness. 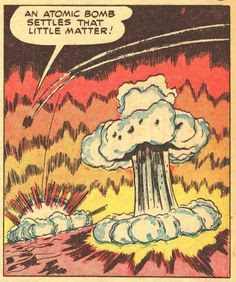 So what does all this have to do with the Lamentations book Lusus Naturae?Well,  plenty  actually.
Lusus Naturae is one of the better horror gaming aids I’ve ever seen and it depicts the violent weird nature of parasites, mutation, loss of control over personal space, having secrets wrested from you in the face of the cosmic. The very nature of what is happening in the setting of the Atomic War comics  almost seems to plug into the background of pseudo cosmic mythos of the
Lusus Naturae book. This is a world ripe for the gods, beings, and horrors of Lusus Naturae to make an appearance.

Or alternatively this could well be a world primed for the appearance of adventurers who might loot, exploit, and deal with the horrors that this world presents. The world setting of Atomic War might an alternative universe from the average post apocalyptic universe. A place where the horrors of mutation and mutants are just getting started. This is a place where the usual forces of Gamma World and Mutant Future cryptic alliances  are just about emerging into a a very different set of Shadow Years.
There is a ton of archaic retro tech just in the background of these issue waiting to be brought to the fore. The final issue's "Arctic Assault" from Atomic War! #4 has it just under the surface begging to be used. Soviet era snow going tanks with skies. 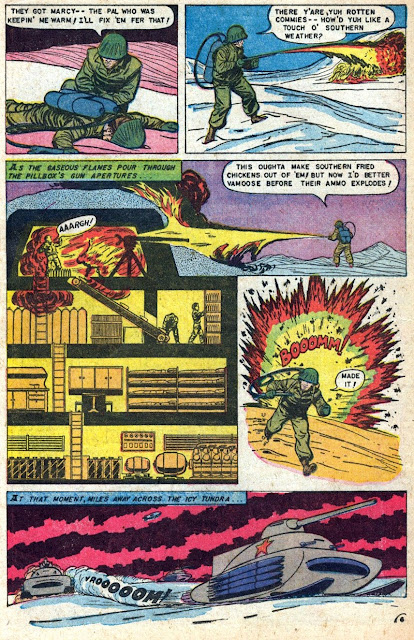 So continuing the weird atomic age theme, the old Gamma World War blog brought this gem of a collection of artwork from the Pageant Magazine 1951 issue.  This was the same era that Atomic War! hit the shelves and its perfect for the events depicted in the four issue run of Atomic War!. Welcome to any city USA where the events have spiraled out of control and the whole thing runs like a continuation of the Korean war on steroids. The timeline in Atomic War! follows through pretty well making the chaos of the shadow years easily doable. 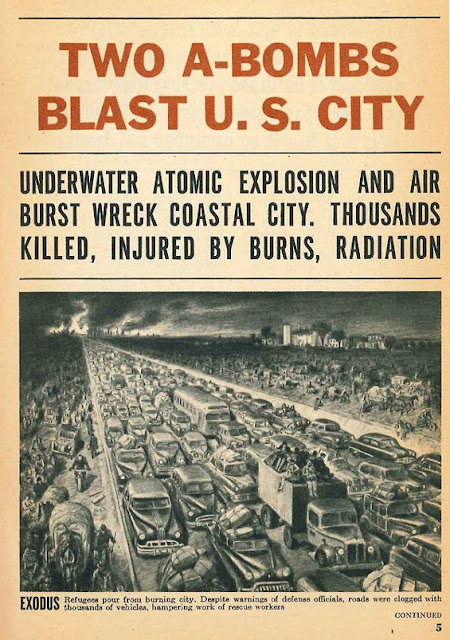 Print these out and use them as hand outs for your mutant adventurers and your ready to go. If I haven't mentioned this all of the material sited here is public domain and easily ported over for any number of old school gaming systems. 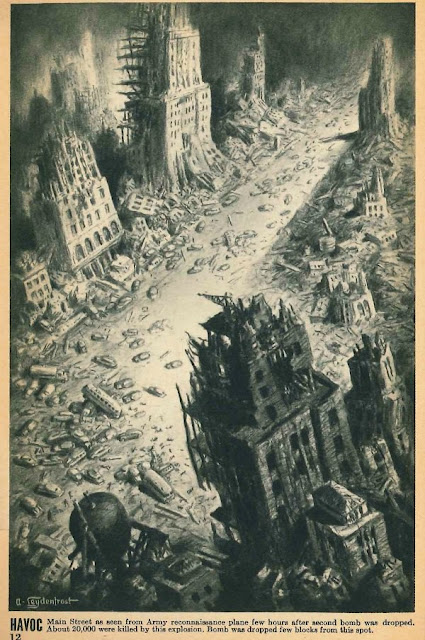 This illustration is perfect for depicting the ruins of a wasteland city and there are plenty of opportunities to drop in your favorite mutant monster or weird wasteland Fifties outlaw gangs right into there. You can almost smell the fallout. 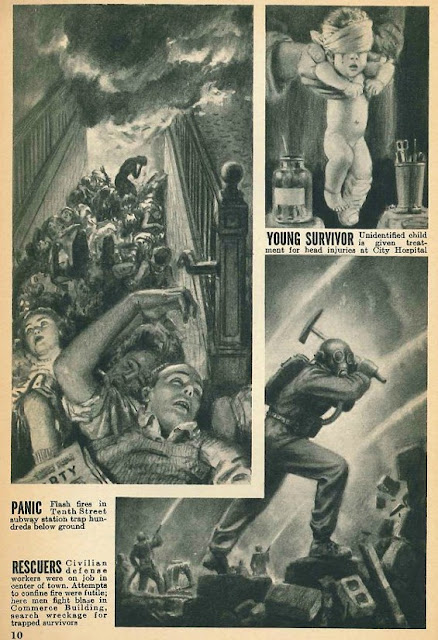 I love the guys in the gas masks and Hazmat suits, they make perfect zombie or mutant forces fodder. The rubble choked stairs are a nice touch. So why I'm I not taking this seriously? Because this is a comic book era reality and the reality is so much worse. This is the same era that spawned Atomic monster movies and this material is ripe to use. As we'll see next installment there's plenty of material left to mine from the wastelands. I can almost see this issue of  Pageant Magazine 1951   blowing on the imaginary fallout laden wind on a newsstand in any city USA. 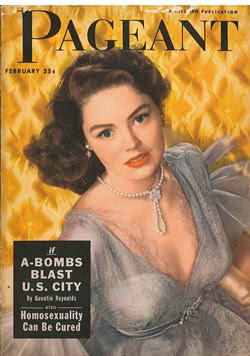 So what I'm planning on doing with all of this campaign potential laden material? This is going to become an Alternative wasteland 789 a world that might have been in the process of rebuilding or going to hell as wasteland campaign takes shape. See you next time on the time trails!