Another "Forgotten" Space Hero! Garth From The Daily Mirror 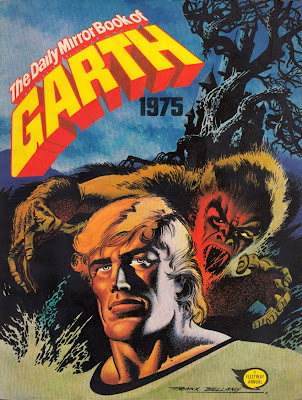 I was having conversation yesterday with my other half, she's a role player by default. She's suffered through a few of my games. I was talking about the fact as a girl she followed the hero Garth in the Daily Mirror. 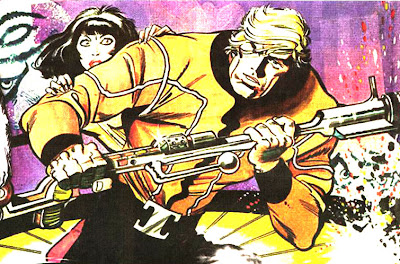 So here's what I was able to find out about this strip :
Garth, the brainchild of Stephen Dowling, made his Mirror debut in July 1943 when, with his ship torpedoed, he was washed ashore with amnesia on to a remote island.

And, long before the last of his 165 adventures in 1997, he had become firmly established as one of Britain's most iconic fictional heroes, reprinted in France, Norway, Australia, India, Spain and many other countries.

The strip was revived briefly a couple of years back by artist Huw-J and featured on the Mirror's web site, but the revamp appears to have proved unpopular with his fans, who clearly hankered for the swashbuckling, daring do original.

Over the years, Mirror readers learned he had been adopted by a Scottish couple who found him on a Shetlands beach. Garth went on to become a navy captain and military genius, then discovered his ability to travel through time after finding a ringed helmet that gave him that power.


"The time-travelling side of Garth influenced Doctor Who without a doubt in my opinion,"  former Mirror cartoon editor Ken Layson told the Mirror.

Layson says that his popularity even saw fans christened their daughters Dawn, the name of one of Garth's many girlfriends down the years, out of their love for the comic strip.
The character from what I've seen is a very British, very cool, & an interesting Doc Savage like figure but entire U.K. homegrown.
Back in 2008 the character also had a crossover with... Squee
Dan Dare!

The better half was also telling me about a time traveling Call of Cthulhu campaign that someone in her office was running based on the Mirror strips!  Why I'm never informed of these things?

I came across this article & interview with   Steve Dowling Creator Of Garth.
Steve Dowling
In the end for me its sort of like discovering this great book that everyone knew about except me. I'll be aquiring the Mirror reprints when I get the chance.

Garth's longevity had been established by Don Freeman, who created almost every basic Garth ploton which the saga was built.
My love for the work of Frank Bellamy is well known to readers of this blog.

His work you can find Here
More Garth Information right Here
This blog was a great help with all Garth related research. Here
Posted by Needles at 8:25 AM