"Wretched Époque takes place in the period known as the Belle Époque. This is the time and the fictional place where Umberto Eco's Simone Simonini crosses paths with Jacques Tardi's Adèle Blanc-Sec, Edgar Allan Poe's Chevalier Auguste Dupin and Maurice Leblanc's Arsène Lupin, amidst anarchist bombings, the echoes of the Dreyfus affair, the catastrophic side effects of secret societies conspiring in the shadows and the mysterious results of experiences conducted by mad geniuses. Not yet pulp, not quite historical, it is neither the right time nor the right mood for Steampunk or Dieselpunk. Welcome to the wretched times of Nouveaupunk!" 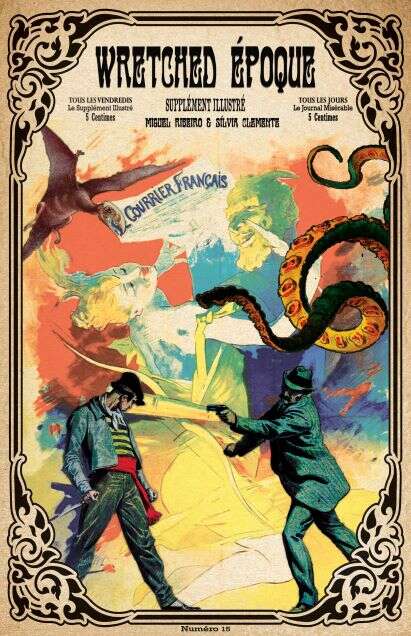 - OSR rules for playing fin-de-siécle anti-heroes (expanded Wretched rules for sanity and mesmerism)
- Information about fictional and real-world secret societies, cults and conspiracies
- Plenty of villains, among them criminal masterminds, mad scientists, mythical beasts and Lovecraftian abominations
- The Apache Underworld and Parisian law enforcement of the late 19th century, as foes or allies to the characters
- The Beyond, origin of all supernatural menaces in the Wretched universe
- Timeline and guide to the Arrondissements of Paris in the Belle Époque""

Wretched Époque rpg By Miguel Ribeiro, Sílvia Clemente, Joe Coombs from The Red Room. Covers a very specific period of French almost but not quite Pulp literature pre WWI according to its own introduction;"Wretched Époque takes place in the period known as the Belle Époque, which is dated between 1871 and 1914, ending when World War I started." Wretched Époque rpg covers both PC heroes & anti hero of these French pieces of literature that takes the Wretched Bastards rpg system & then mates it to a modern OSR undercarriage. The Wretched Époque rpg is fun & very well thought out in two hundred seventeen pages. Wretched Époque rpg plays up it's criminal elements of gangs, the underworld, the political climate, and more with a twist of mad science.

You can grab the Wretched Époque rpg right over here