This new, completely revised second edition of the Thieves' Guild rules now provides more ways than ever for players to experience the danger-filled life of a medieval brigand, burglar, or cutpurse. Thieves' Guild gives thief characters opportunities to use a wide range of thieving skills and abilities to plan and commit the perfect crime. In addition to basic game mechanics, system rules cove every aspect of thieving activity, including:

"Thieves' Guild also contains introductory scenarios to start you on your life of crime, from highwaymen preying on the traveling traders and merchants, to daring burglars seeking the treasures of wealthy city dwellers! Just remember that it's brains rather then brawn that you'll need to avoid the forces of law and order, and the fiendish twists and traps that may stand between you and the booty that could be yours!" 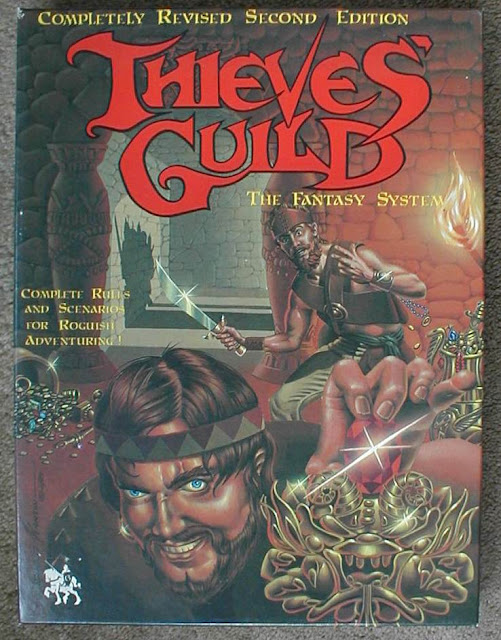 "Thieves' Guild is part of Gamelords' complete Fantasy System, role-playing for the discriminating palate, providing a new dimension of excitement for players who are tired of mindless die rolling and hack-and-slash adventuring. This package includes Basic Character Creation, a separate book describing a detailed character creation system that features flexibility and decision-making by the player as he designed his character's abilities, past heritage, and personality, both at the time of initial creation and as the character advances. The Fantasy System places the emphasis of the game back on role-playing and creative group interaction, and features simple, straightforward game mechanics, with a variety of optional additions for GameMasters who want to introduce greater realism into their campaign."

There are times when one hates remaking the wheel & that's no joke.Thieves Guild by Different Worlds Ltd.  added quite a bit of solidly old school material that it made it excelllent for playing a practical Robert E. Howard Conan style game without the over arching issues of alignment. Issues that seemed to crop up in the grand game with frighteningly regularity. Now at length in the past I spoke of Game Lords Ltd. Thieves Guild which remains one of our  all time favorite 'add on' systems for old school Dungeons & Dragons style games.And don't just take my word on the Thieves Guild box set check out the Heroes & Otherworlds blog take on this relic of the gaming past here.

The Heroes & Otherworlds blog brings up an important point about the Thieves Guild Box set; "In a nutshell, Thieves Guild was a D&D-esque system/setting focused on, well, thieves and running adventures around being the bad guy.  Fun things like tomb robbing, hostage taking, banditry, burglary, etc.  The tagline for Thieves Guild was "Sometimes it's more fun to play the bad guys." At times they are right.  We enjoyed playing Thieves Guild and used the GameLords City of Haven setting as a back drop for many adventures. In fact Brian Isikoff has used Haven with Heroes & Other Worlds as well."
So Thieves Guild remains out in the wild today with it's systems mostly forgotten by the old school except for some of its die hard fans. The fact that Thieves Guild is so fondly remembered is interesting. And the fact that its peusdo Reniessance setting is so much embodied by the Haven The Free City campaign setting has one wondering about resurrecting both Haven & the Thieves Guild systems. 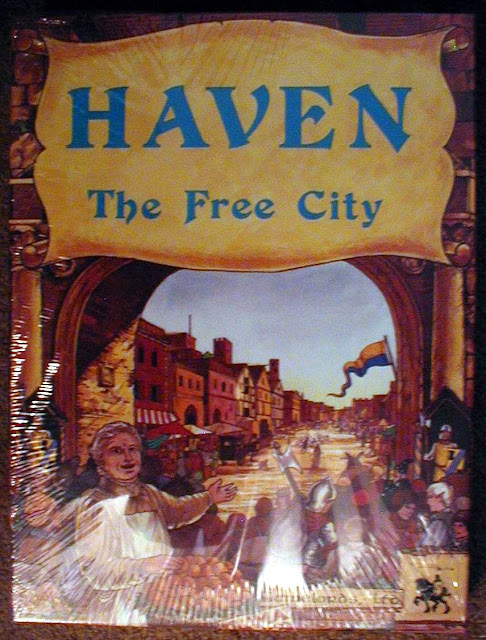 With Haven the advantage is the layout, cartography, and even the entire city is right there for the DM to pick up and run with. So we can see that both Thieves Guild & Haven The Free City would be excellent additions to say a Lamentations of the Flame Princess rpg campaign. Everything is right there from playing the 'bad guys' to full out businesses to play around in.
However the imagination turns to Castles & Crusades because Haven seems just the sort of a setting where the fantasy races, businesses, etc. all scream mid level old school  fantasy. This also comes into the light for Adventurer, Conqueror, King rpg where the player's PC's could be taking over block by block.
For a combination of Greyhawk & Haven The Free city this adds in that Haven is simply another city on the waterways of Gary Gygax's fantasy campaign. A place of the illusion of wealth & a couldran of greed blending underneath.
Posted by Needles at 3:14 PM