"The Mines of Keridav is an adventure designed to be used with almost any fantasy role-playing system, including Chivalry & Sorcery, RuneQuest, and Dungeons & Dragons. The player characters attempt to travel through the valley of Tiraval to rescue the Princess from the evil wizard Keridav" 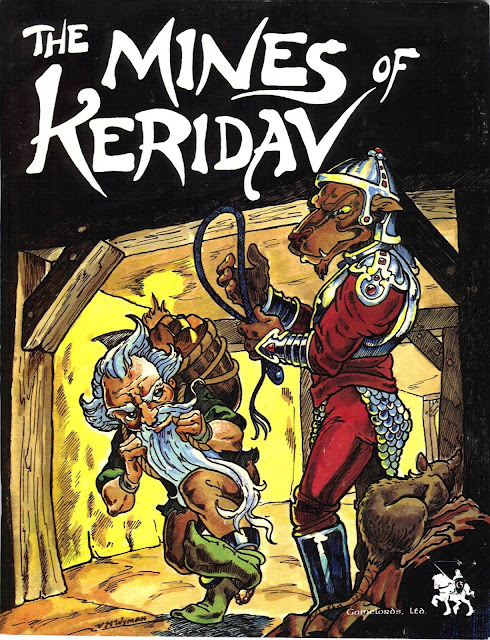 The Mines Of Keridav By Kerry Lloyd  is a module that resembles a  beast out of time from the late Sevenities and comes from Gamelords, Ltd. There are two versions of this vernerable module according to the wiki entry; "The Mines of Keridav was written by Kerry Lloyd, with a cover by Bob Charrette, and was published by Phoenix Games in 1979 as a 24-page book; a second edition was published by Gamelords in 1983 as a 28-page book including statistics for Thieves' Guild."  The Mines Of Keridav version of  that graces my collection is the 1983 version. The Mines Of Keridav is a departure from other modules that were out at the time of the module's publication because of the clever use of the wilderness in the module. There is overland exploration, wilderness encounters, and much more. And this was an innovative adventure approach that was used in 1979 within, The Mines Of Keridav. This is something that Richard A. Edwards noted within his review of The Mines Of Keridav in Space Gamer issue#33; ' Richard A. Edwards reviewed The Mines of Keridav in The Space Gamer No. 33.[1] Edwards commented that "The Mines of Keridav is a step forward. No longer must other FRP systems adapt D&D-oriented material to theirs. The heavy emphasis on the above-ground adventure is a real bonus over the now-prolific use of underground room to room scenarios. This is a real bonus to any game master's library of adventures."'
And it's this coupled with several other factors that makes  The Mines of Keridav stand out as both module & supplement in many ways.

This is because the adventure setting is baked into The Mines of Keridav in many of the same ways that it was in other '80's modules. The use of the setting around Keridav is key here as much as character as the vile villain, the princess to be saved, and the mines themselves. Is this good, bad or indifferent?! The answers are baked within  the adventure.
The Mines of Keridav is a solid addition to an OSR dungeon master's tool kit. The mines themselves could easily be added into Greyhawk with little issue.Another small terrority in the expansive setting.
For Adventurer, Conqueror, King this is a another kingdom & area to add into the PC's expanding crowns. For Castles & Crusades this is a classic module with potential. The AC has to be played with but the potential is there to use The Mines of Keridav as a jump in point for a classic campaign. Why? Because almost all of the action takes place above ground. Not what the players will be expecting at all from such a title as The Mines of Keridav.
Now let's talk about the 1983 version of the mines shall we?! This module was created with the Thieves Guild system in mind fully. The Thieves Guild incorporates quite a few innovations for '83 which according to the Thieves Guild wiki entry includes the following; "Thieves' Guild is a fantasy system that originated as supplementary rules for thief-type characters and grew into a fairly complex system of its own.[1] Emphasis is on outlaw characters with stealth and dexterity skills.[1] There are 60 noncombat skills, each with four levels of mastery; there are no magic skills for characters.[1] The "Basic Character Creation" book (32 pages) describes characters, abilities, skills, training, and equipment"
All of this is perfect for running a full on outlaw campaign which is what my own experiences with The Mines Of Keridav bares out. We survived  The Mines Of Keridav by playing it coolly, keeping our heads, and dealing with the aftermath.
Our escape from the mines however netted us a bounty on our heads to which a very dangerous bounty hunter came after us. This one! 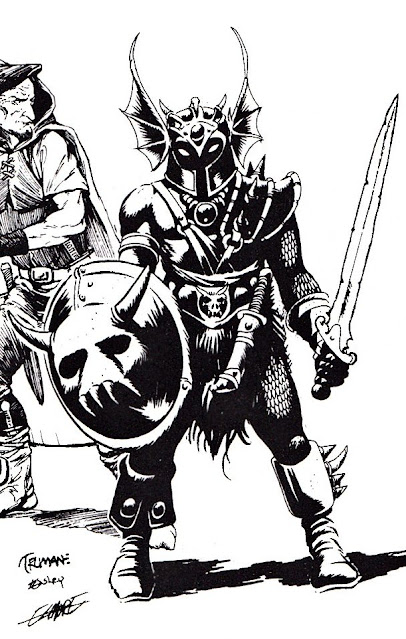 The Mines Of Keridav By Kerry Lloyd Part of the Adventurers series Is Available Here.