"Welcome to the arid, mysterious world plagued by trans-planar monsters known as the Angels. You won't find any rules here, nor any concrete information that must be used. Everything is presented in form of lists and random tables, to help you flesh out your own version of the world - or to allow smooth transplantation of ideas to your game." 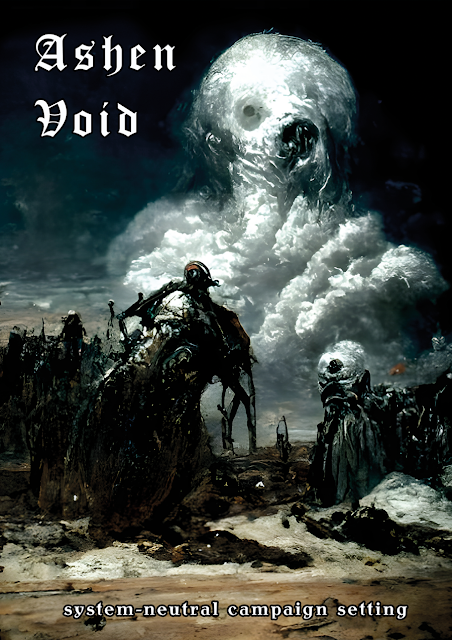 Ashen Void is twisted in all of the right ways, this is a stat free & totally random set of tables about a world plagued with trans-planar monsters known as the Angels. Ashen Void is a hard one to pin down as this is a totally free & randomly generated world with tables dealing with everything from giants, ruins, wastelands, towns, etc. all totally random. And there are so many random tables but this is a good thing & we'll get to that. Albert has a long history with the OSR through his World of Ortix blog here.
There is so much A.I. generated artwork by Albert Rakowski that its a bit distractiong at times. Yes, believe me I get the trend with the  Mork Borg rpg setting up the background artwork & the distracting fonts. Fortunately there's very little of that in Ashen Void.  Instead in Ashen Void we get random tables to generate entire campaign evirons, dungeons, monsters, and much more. This customization of randomness is going to keep players on their toes.
And this consistant with  random table after table of well everything in Ashen Void & this is done on purpose according to the author's introduction; "In this book you will f ind the outline of a setting that has been growing in my mind for the last few years. Or maybe even longer, as it began somewhere between 2011 and 2013. All rules are presented in a very vague way to make the game as system neutral as possible. They should be compatible with virtually any OSR ruleset. Nothing that is described here should be treated as an element necessary for the setting’s coherence. That’s because nothing is coherent here - it’s just a toolkit for you to use, either to include in your own campaign"
And what a tool kit! Ashen Void does a Lot of the heavy lifting for the DM to create their own OSR or Science Fantasy setting from scratch. With a handful of dice & Ashen Void the DM can create world after world of good solid gaming material from the ether of imagination.
In eighty eight pages Ashen Void manages to accomplish campaign material that other supplements take page after page to explain. And it's all at the DM's whim. All in all it's really hard to put a rating on Ashen Void because of what it randomly does & how it does it. But Ashen Void is a solid addition to a DM's tool kit regardless of their genre of choice. Ashen Void fits the OSR very well with it being perfect for Mutant Future, Lamentations of the Flame Princess, Mork Borg, or any other of the original OSR titles. It would also be perfect for orignal Dungeons & Dragons.
Ashen Void is perfect as a campaign setting for any 2d6 rpg and I'm looking at any of the Cepheus Engine games here. This is especially true of Sword of Cepheus, Cepheus lite, Barbaric, or any of the other 2d6 powered system.