"Sword & Caravan is an OSR setting book for playing a historically accurate fantasy campaign set in the East along the region known as "the Silk Road" at the turn of the 12th/13th Centuries. This historic campaign's timeline is set amid the turbulent era between the Third Crusade and the Mongol Invasions. This marked Europe's earliest period of post-classical interaction with the East." 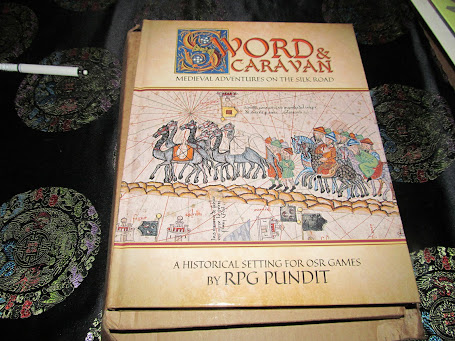 "As Players, you may decide to take on the roles of crusaders, merchants, or explorers traveling to ancient and mysterious lands. Alternatively, you may choose from any number of unique character concepts native to those lands."

With a detailed gazetteer of every region along the Silk Road from the Crusader States and the Muslim world to China, Sword & Caravan gives you everything you need to explore the history and varied cultures of a region filled with war, intrigue, commerce, and conquests."

Everything within Sword & Caravan is geared around the 'Silk Road' from the Silk Road of China & the middle East as campaign setting, to adventure hooks set around the whole affair. Sword & Caravan isn't pulling punches with lots & lots of detail about the Silk Road itself from most of the major & minor towns, cities, and setting all detailed. Sword & Caravan follows the major conceit of Lion & Dragon & Dark Albion notably that the major race detailed for PC's is human. The whole of Sword & Caravan is humancentic & so it should be. What is the 'Silk Road' that we're talking about here?! Well, according to the Silk Road wiki entry; "The Silk Road (Chinese: 絲綢之路)[1] was a network of Eurasian trade routes active from the second century BCE until the mid-15th century.[2] Spanning over 6,400 kilometers (4,000 miles), it played a central role in facilitating economic, cultural, political, and religious interactions between the East and West.[3][4][5] First coined in the late 19th century, the name "Silk Road" has fallen into disuse among some modern historians in favor of Silk Routes, which more accurately describes the intricate web of land and sea routes connecting East and Southeast Asia, the Indian subcontinent, Central Asia, the Middle East, East Africa and Europe.[2]"

We get most of the major cities, towns, oasises, deserts, ruins, & tons of details in one hundred ninety five pages with an index built in. And plenty of adventure hooks thrown in. Do youself a favor & get the hardback its well worth the money. This makes up for the terrible version of Drivethrurpg's Invisible College. We get Greece, China, and many places inbetween in Sword & Caravan. Plus we get most of the major PC classes from these and other places. Sword & Caravan creates its atmosphere by being straight up & really well presented.  Sword & Caravan By The RPG Pundit presents its world, campaign setting, etc. in a straight forward no nonsense manner. There's no side hustles here, the history in Sword & Caravan is right on the money, the writing crisp and too the point. The history is accurate & on point.
Sword & Caravan is easily one of the better OSR sourcebook on the market. The book is beautifully done, the layout clear, the writing is hard core on the history coming alive under the author's pen.
Sword & Caravan is a labor of love and it's on point offering its readers a glimpse into a word of it's witnessing.
Sword & Caravan offer a nicce alternative campaign setting to the usual OSR campaign books on the market.