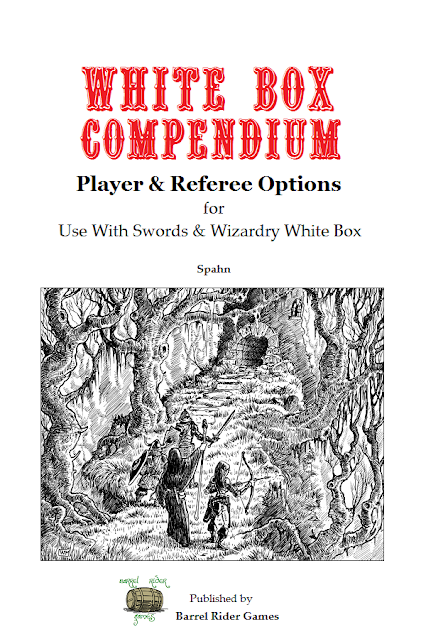 Inside these fifty pages you'll find new resources to help spice up your White Box campaign, all while keeping it fast and fun!"

The White Box Compendium [Swords & Wizardry] By James M. Spahn was gifted to me a couple of Christmas's ago. And DM Steve suggested that I retake a look again because of some of the upcoming adventure events we've got going on.
And the reason was very simple there are boat load of new PC classes, and many of these tie directly into the demi human races of old Dungeons & Dragons style games. These are well thought out and are very much tied back into  James M. Spahn previous efforts. The psychic talents are well thought out & James M. Spahn has an easy writing style that goes down easy when your trying to write out an adventure outline for a Saturday night game. Accolades and Honor has a bunch of options thought out for a knightly character even if that PC isn't a fighter type. But this comes with a buch of concessions of character.
And finally there's a section on Halflings and it adds in brand new section on the PC idea and concepts for Halflings in OSR style games.

White Box Compendium expands upon many of the ideas that we've seen in Swords & Wizardry for a while now. What James M. Spahn does is a sly flourish to take his guidelines & rules then refine them into a useful & concise way of handling the OSR rpg material of White Box Compendium. We've got a wonderful selection of classes in this book that reflect some solid OSR Swords & Wizardry PC classes such as:
Acrobat
Barbarian
Black Widow Elf
Cavalier
Dagonite
Deepstone Dwarves
Duelist
Goblin
Greenleaf Elves
Jester
River Halfling
Sidhe
Sprite
Tomb Robber

I highly recommend the White Box Compendium [Swords & Wizardry] By James M. Spahn because it brings a solid feeling of  OSR flavor & more S&W goodness without a ton of game fluff to bog down your OSR or old school campaigns.