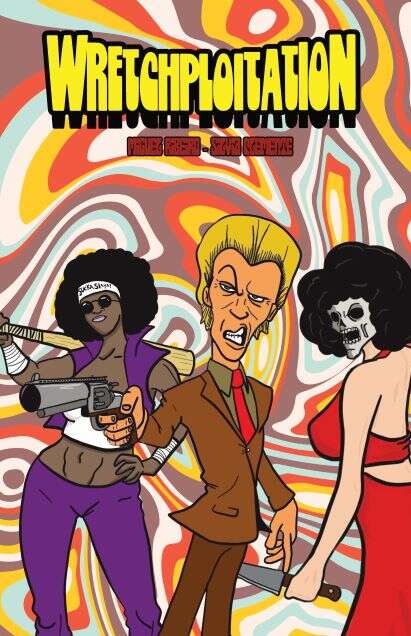 "Wretchploitation expands the Wretched line into exploitation movie territory, already rife with seedy anti-heroes. Whether you like violent action, in the way of blaxploitation, 70s cop movies, Hong-Kong flicks and Eurocrime, or if you would, instead, emulate the horror and gore of cannibal, zombie, Giallo and splatter films, or even if you prefer the sleaziness of sexploitation and nunsploitation, this set of rules has got you covered!"

Wretchploitation is another Red Room creation by Miguel Ribeiro &  Wretchploitation takes its que from the rest of the Wretched rpg titles. You play scum & anti heroes with a take on some really low down PC types with Assassin, Common Citizen, Investigator, Man of Action, Proselytizer, Rogue and Scholar, plus the optional Conjurer, Psychic and Shaman. The adult grind house & exploitation film genres are on  full display here as is the adult artwork & public domain comic book artwork. This style fills all one hundred & fifty five pages of weirdness & depravity. All of which is going to be familiar to the average OSR or old school D&D style of player. But Wretchploitation isn't one for the kids; not at all or anything to do with children around! Seriously this is an adult title & not for the faint of heart! You are playing the scum of the Earth, antiheroes with evil hearts whose character creation relies on the 13 deadly sins mixed in with old school OSR rules! Wretchploitation takes the idea of the exploitation & grindhouse style of OSR play seriously. The subject matter is another turn entirely with both an easy mode & hard play of style for PC generation.
The attention here on Wretchploitation is the idea of the PC's doing 60's & 70's  'evil' and downright weird adventures. The layout, artwork, etc. are all geared in this direction. From Cannibal Holocaust style adventures, to 'Men's 60's Adventure' magazines to straight up Pulp style anti heroics Wretchploitation By  Miguel Ribeiro covers the whole affair.

Adventures rules  run the whole way with play styles, adventure ideas, equipment, firearms, cars chases, etc.covered in detail within Wretchploitation. And the game excels at those details. But is Wretchploitation By  Miguel Ribeiro  actually playable? In a word, yes! The game takes enough time & energy to bare out Wretchploitation's game systems & rules well enough to encourage a very different OSR style of play. And this follows well in the wake of Wretched Époque which uses many similar rpg system but these are not quite the same. The reason is the fact that two different & very almost opposed fictional  historical epochs are covered.
Wretchploitation covers this with gusto allowing both DM & players to get down & dirty with their OSR adventures. Sometimes it's fun to play the bad guys & Wretchploitation allows that to happen in spades. You're a part of a crew of the 'bad guys' and bad things are going to happen!
Because Wretchploitation is an OSR game this is a rather easy game for OSR or old school players to slip into. But in no way or shape is this a game for children to even be near or to play! Wretchploitation lives up to it's sleazy & scummy roots with it's pedigree of exploitation films, softcore 70's & 80's sources, and some very questionable artwork. Wretchploitation fits the genre of 'exploitation noir' quite well & it's an actually quite well made game. Though I'd love to play this game I'm not sure that I'd ever allow the PC's near my family in real life. Five outta of five if your looking to do an Wretchploitation campaign.