Up on the slab is Cepheus Engine Journal Issue #11 which is one of the best free resources for 2d6 centric rpg's. This issue's focus is similar to issue #10 and that's the 'alien centric' theme in this issue. And it does an excellent job of presenting that feel for the table top. 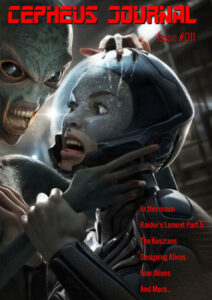 We dive into the P-O Bergstedt driven 'From The Editors' which covers the latest direction for the venerable Cepheus Engine Journal itself and more. Then Todd Bradley takes on the question of  'Cepheus Deluxe Personal Combat' & it's a solid addition to the Cepheus Deluxe array. And then we're given our first glimpse into a new alien race for your Cepheus Engine interstellar campaigns with the 'The Koszrans' by Paul Drye. And then Jim Vassilakos gives us 'Designing Aliens' & it's another great article with lots of practical & hands on advice for the 2d6 DM. There's some solidly done tables. Brett Kruger gives us 'Other Folks Gold' which isn't an article that one would expect; "In this article, which I hope will be the first of many, I’ll be looking at the Netflix original series called Love Death and Robots to see what role­playing nuggets I can mine from it, hence the title. Season one was made up of eighteen episodes. In future articles I’m going to be mining the science fiction of tv shows, short films and movies for gaming goodness." And that's exactly what he does for 2d6 game campaigns. There's some really good stuff in here for Cepheus Engine,  Sword of Cepheus,  or Barbaric taken directly from the Net Flix's series Love, Death, & Robots'.
And then we get a Todd Bradley article about converting from 'Converting PCs from CE to CD'. This becomes more relative as new titles & adventures adapt to the CD 2d6 rpg format. Brett Kruger is back with Dump Demons a very interesting alien set of alien colony or organisms  as it were; "The Dump Demon is not actually an individual entity but, just like coral reefs, is a colony of creatures that act together as a single semi­sentient creature. Like a reverse hermit crab, as the colony grows it collects objects from its surroundings to build its form. Dump Demons grow by consuming objects and incorporating them into their mass, and especially love the discarded rubbish locations of sentient creatures. Dump Demons do not like environments where they can't consume waste to grow. Dump Demons spawn when a piece of at least one kilogram of the colony is broken off from its host colony. This never happens naturally and is always the result of violence." These are very alien, nasty, & I can't wait to use them.
Brett Kruger as interviewer with an ' Interview with Omer Golan­Joel of Stellargama' and it's a solid interview with one of the 2d6 independant designers in our part of the hobby.
Jon Zeigler gives us 'Four Aliens' for the Human Destiny setting;"The premise is that in the mid­21st century, Earth and humanity are “annexed” (conquered) by a vast interstellar empire, the Khedai Hegemony. The Hegemony doesn’t seem interested in exploiting us for its own benefit. Instead, as has happened with many other pre­interstellar cultures, we were on the verge of self­destruction; the aliens wanted to rescue us and guide us into mature membership in interstellar civilization." The alien races are well done & the whole article feels & reads like a preview of a coming sourcebook but this is a really well done set of aliens.
Then we get into 'Almost Alien' By Jo Jaquinta which is about uplifted creatures; "The concept of “uplift” ­ transforming a species of animal into a more intelligent variety, was started in Science Fiction as far back as H.G.Wells, but was most popularized by a series of David Brin’s novels. The essence is that the particular genes or traits that code for intelligence are determined, and these are spliced into existing creatures to create intelligent forms of them. This is a handy tool that a referee can use to create any number of interesting entities to add to their games. Rather than dwell on that, this article will focus on one example and look at it in terms of not just physical stats, but a broader social aspect. " Again the article provides a solid foundation for the player or DM looking to take their game in the article's direction. There's some really solid legs here for an established 2d6 Science Fiction campaign that wants the direction of uplift without the rules heavy aspects. Jo Jaquinta brings more of his 'Raider's Lament' in part five of the ongoing Science Fiction saga. Again really good details.
'Beast From Beyond The Stars' by Norton Glover is another stand out article detailing a really interesting invasive alien species for Barbaric! & Sword of Cepheus! So well done and I don't wanna spoilt the surprises here.
'Down & Out In Low Orbit' by Jo Jaquinta catters to the lowlife & seedy side of the 2d6 interstellar aspects of the spacer life in the black. Where local conditions such as gravity, infections, and worse are waiting for the low life spacer PC.
P-O Bergstedt gives us  'The Imko and The Flertvad' alien racees with enough flavor for the edges of three campaigns. These are very well done aliens and are actually alien while being extremely playable.
We get a 'What's New' rundown of the latest 2d6 titles with tons of new products entering the market and there's some great stuff! Finally we end with Ricardo Emilio providing us with a selection of 100 ton starships! All in alll well worth the band width and down load for our 2d6 Cepheus Engine driven games!
You Can Download  Cepheus Engine Journal Issue #11 For Cepheus Engine & Other 2d6 Science Fiction or Fantasy Rpg's  Here