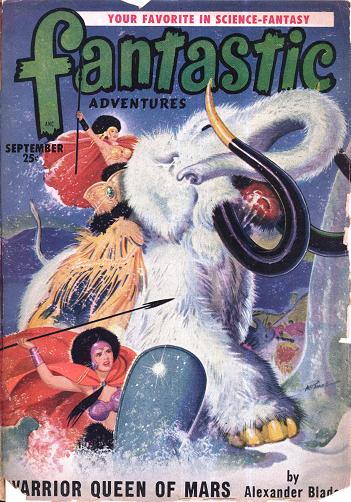 Down load It For Free
HERE

Need a completely different take for Astonishing Swordsmen and Scorcerers of Hyperborea rpg? Perhaps cross over adventure for pulptastic game and a modern spin on things. This just might be the story for you. Fantastic Adventures was a completely different type of pulp with a weird spin on the usual sword and planet stories. These were some really different martians with more in common with the Amazons of AS&SH or even gasp Arduin! Hell they might even make a nice encounter upon Carcosa for that matter.
This issue featured the talents of Alexander Blade who was actually  Rog Philips. Now Philips had a very different sense of Mars then Edgar Rice Burrroughs and was more in tune with the ancient astronauts and other mysterious ancient peoples from outer space then the usual stuff at the time. I decided to place this blog entry here because it didn't seem to belong on the Dark Corner blog.
The cover of this issue is one of my all time favorites by the great pulp cover artist Robert Gibson Jones!

From The Marooned On Mars Blog :


a fantastic adventure penned by science fiction writer Rog Phillips under the pseudonym Alexander Blade with striking cover art by Robert Gibson Jones, as it was originally published in the September 1950 issue of Fantastic Adventures magazine.

Using Warrior Queen Of Mars
For Your Old School Campaigns 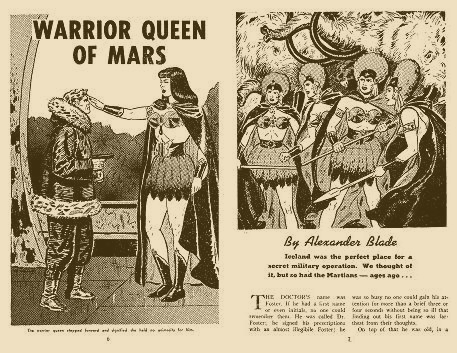 "Out of the frigid fastness of Iceland came a strange threat to Earth — centuries old!"

Believe it or not this makes a fine crossover with PC's having to deal with an Amazon invasion force  from Mars. Make no mistake about it these ladies are going to be a problem. They've using genetically modifed mastadons, psychic abilities, and advanced relic or artifact technology. Perhaps they're the remains of a lost Hyperborean colony suddenly landing upon an ancient base. And now their trying to get back ot Hyperborea or they are a cult of ancient god worshipers who have aquired relic technology of the world and have crashlanded upon Mars. Either way the story maks a hell of across over pulptastic adventure.
In my own Stars Without Number Post apocalyptic game they are an ancient sect of Amazon warrior women who have only recently awakened after thousands of years. A cryptic race of cloned warriors whose purpose is the evolution of the human race and only now is it being exploited.
For Mutant Future they might be an invasion force awakened after the atomics have dropped and key critical conditions have been met to allow them to come to Earth.
For Carocsa they might be a cult of Walker in the Wastes worshipers whose escaped the planet after thousands of eons. Their advanced technology has allowed them to survive for thousands of years and only now are they exploiting mankind and are ready to harvest us for their horrorible sanity shattering god.
Posted by Needles at 9:16 PM