Earlier today I was going through a box of rpg material and stumbled upon my old Fasa Star Trek rpg Klingon race books including Klingon Star Ship Recognition Manual. I've haven't seen these books in months. They included a series of notes I had made last Christmas about using the OD&D Star Trek PDF supplement and Carcosa. Specifically, about running an adventure using the Imperial Klingons from the Fasa material upon Carcosa. 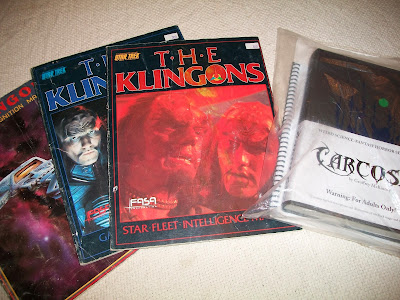 After making some addition notes and rereading what I'd written, I was pretty convinced that I could run a one shot game using this material.
The following is based partially on the Fasa Star Trek Material :
A K- 4 (Enforcer) Class II Gun boat ( manufactured at the Gnuu Re' ship yards) is on a routine patrol in the Triangle. On board are six Imperial Klingon space marines( Imperial Klingons are like a cross between old Soviet Russian forces with a dash of samurai warrior, they're a far cry from the Next Generation watered down Klingons) in hyper sleep. A space time gate appears in front of the ship and sucks it in! The Klingon ship reappears in Carcosa space!
Instruments frozen, warp core breached, deflector shields failing, and their going to crash! The ship crashes into alien jungle floor! Two months later the cryo tubes wake up the marines now stuck on an alien planet. The rest of crew dead, eaten, or worse. The PCs set out to find out about their fellow warriors and crew mates!
They exit the ship into a world of Lovecraftian horror!

After making a quick series of calls this afternoon I was able to get a hold of my buddy Peter whose an old Trekker  Fasa head from way back and into OD&D as well. His brothers were in Torrington visiting with him. I've played with these folks way,way, back when. So it was an easy fit to get them to play especially when I mentioned an all Klingon warrior party. These were 3rd level fighters armed with Lev'ek knives and disruptors MK ones each with 10 shots each (sounds like a lot but this is Carcosa folks and they went through those like a hot knife through butter).
The first thing that the PC's recovered was cooling undergarment for their armored suits. The Klingon Imperials don't really do well in hot jungle conditions. They began to take in their new world and were almost attacked by green multi tendril monkey type Lovecraftian spawn things. These small two hit point things made thing especially difficult but were easily dispatched with disruptor fire.
The ruined interior of the gunboat would be the base for the party for now. Exploration of the surroundings near their ship lead the PC's to a nearby Green man village. The PC's witnessed the sacrifice of a maiden to a local multi tentacled god. The PC's were far more interested in the energy beam weapon the village had then some frail thing being sacrificed to the local 'god'.
They attacked and managed to disrupt the ceremony. They were able to find spare energy cells, and get an amulet with a small shield generator built into it.
The maiden was eaten but they did get their hands on the technology. One of the PC's did bite the dust while trying to get his hands on a disruptor mark II during play by being dissolved by a green slime that was being used  by the village as a garbage pit .
The warriors fled after the place was attacked by a wizard in a giant war machine. The exact quote from one of the players went something along the lines of 'One does not fight in a burning building."
The PC's made it to another crashed section of their ship and except for the eye ball like parasites that infest parts of that ship.
The PC's were able to up grade to the disruptor Mar II from stores after defeating a whole bunch about giant leeches with multiple human eyes implanted along's is surface. It too the patty about 22 minutes to dispatch the monsters and search this section of the ship. They found the energy weapons they were looking for.
Further exploration found the group facing down that same wizard who wanted to add the PC's to his collection of oddities.
The party wasn't about to tangle with the monster war machine this NPC was living in. The party made it on to the war machine and were taken to the underground environment of the  wizard Calri' Fen.
Fen had a collection of alien warriors in suspended animation including the PC's ship mates and warriors from the past.
The PC's were to be flash frozen and put on display. They managed to take out some of the robotic horrors the wizard was using as guards.
Two sonic grenades and they escaped from the wizard's tower to regroup and check out the booty they gained for Klingon Empire! One of the PC's managed to wound the wizard causing him to flee! The war machine crashed into a nearby set of ruins and thus began the Klingon  warriors guided tour of Carcosa after they killed the wizard!