More Free Sword and Planet PDF With The “Coffin of Life and Death”, From The April 1948 issue of Fantastic Adventures magazine For Your Old School Swords and Sorcery Campaign

Download Right Over
HERE
The April 1948 issue of Fantastic Adventures featured a story that I ran across a couple of months ago on the Marooned on Mars blog called 'Coffin of Life & Death'.
My Stars Without Numbers Post Apocalyptic campaign features roving bands of ghouls & undead. Devices such as the coffin have made Apex Medical one of the most loathed mega corporations from my games!
These items have also appeared to wreck havoc in a number of sword and sorcery worlds as well.
You can find last week's game right over HERE
According to the Marooned on Mars Blog :
"Thanks to another generous fan of old magazines at the Internet Archive, you can read or download “Coffin of Life and Death”, a short story penned by the somewhat elusive writer Robert Wade, with creepy interior artwork by pulp artist Rod Ruth, as it was originally published in the April 1948 issue of Fantastic Adventures magazine." 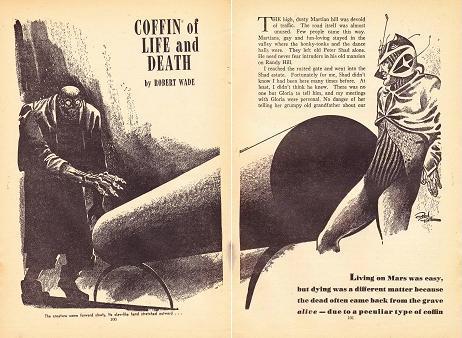 “Living on Mars was easy, but dying was a different matter because the dead
often came back from the grave alive — due to a peculiar type of coffin.”

The coffin and devices of its ilk have appeared across the planes in various places across space and time.  There is a 60% chance of the dead coming back to life. The rest of the time those placed within become something far,far, worse.
These devices are ancient alien technology that accesses the negative material plane and infuses the bodies of those placed within into a state of undeath resembling the Ghoul plague of Orcus. These devices are often infused with alien radiations and strange technology that often has been used to create undead soldiers and servants when wounds prove to be too much. The device can be used three times per day but over use may result in a 1d10 damaging explosion that will result in the recreation of 1d20 undead horrors from any cadavers in a two or three mile radius. An explosion may result in a tear in space and time as well.
These items were also used by the ancient Atlantians, Lemurians, and many others. These device's plans have been copied repeatedly over the centuries. There are legend that these devices were originally created by the antediluvian serpent men of Valusia
Posted by Needles at 12:39 PM