All the Time in The World ~ A Review & Commentary On George Pal's Time Machine DVD For Your Old School Time Travel Campaign Part II ~ Secrets Of The Time Machine Revealed.

Further Thoughts on George Pal's Time Machine and HG Well's book
Its Thursady December Fifth and I'm looking over notes for another article on George Pal's The Time Machine. The movie is fresh in my mind having watched it three times in succession to get all of the points I need to. I believe that everything begins and ends with the Time Traveler himself.
Part one right over
HERE

The seeds of October 12, 802,701,  are already in play in 1899. George Wells (Rod Taylor) isn't traveling in space merely time, his time track to be exact. For this is a series of alternative time liness that are all connected to the character.

Filby speaks of Jamie and George meets him in 1914 only to appear again an alternative 1966.

"George uses the Time Machine to travel to the future. He first leaves the machine on September 13, 1917, where he meets James Filby (Young again), whom he mistakes for his father, David. James informs George that his father had "died in the war", and that the United Kingdom has been at war with Germany since 1914. He tells him that an inventor lived across the road who disappeared around the turn of the century and that his father wanted to keep the house in case the owner ever returned. George then travels to June 19, 1940, into the midst of "a new war", which he briefly stops in as his machine is buffeted from side to side."
Out of the entire group of friends (witnesses) Filby is the only one who contemplates the horrors of the machine and keeps George's house, workshop, plans and notes. He knows the machines possible applications and what might happen. Filby also knows two things : Geroge has the secret of time travel, plans for the machine, and knows that George may return someday. He will do anything to keep the secret of time travel out of the hands of anyone else including his own family hence Jamie not knowing George.
The Secrets Of The Time Machine
Folks have been building replicas of the time machine prop since the movie first appeared. Plans for the machine are readily available online. You can see an archive right over HERE
The
Seeds of The Eloi

George's next stop is August 19, 1966, in a futuristic metropolis. He is puzzled to see people hurrying into a fallout shelter amid the blare of air raid sirens. An older James Filby tells him to get into the shelter. James spots an atomic satellite zeroing in and flees into the shelter. A nuclear explosion causes a volcano to erupt. Civilization is destroyed in a nuclear holocaust. George restarts the machine just in time to avoid being incinerated, but lava covers the machine, then cools and hardens, forcing him to travel far into the future until it erodes away.


Let's face some facts here:
This isn't our 1966 and its very advanced for the time period. There are some very advanced technology presented. Humans can survive nuclear weaponry and fall out. The weather was artificially controlled and right up to the nuclear satallite strike pleasant.

I heave a feeling that the flower that George brought back with him allowed scienctists to break the secret of DNA and genetic manipulation allowing the creation of Project Morlock in 1962. This project's seeds were began with the hope of creating a superior solidier.
There are characteristics that reflect this:

The Eloi are a commerically created food product born of genetic and corporate desparation. According to the time machine by HG Wells and wiki :

By the year AD 802,701, humanity has evolved into two separate species: the Eloi and the Morlocks. The Eloi are the childlike, frail group, living a banal life of ease on the surface of the earth, while the Morlocks live underground, tending machinery and providing food, clothing and infrastructure for the Eloi. Each class evolved and degenerated from humans. The novel suggests that the separation of species may have been the result of a widening split between different social classes, a theme that reflects Wells's sociopolitical opinions.
The main difference from their earlier ruler-worker state is that, while the Morlocks continue to support the world's infrastructure and serve the Eloi, the Eloi have undergone significant physical and mental deterioration. Having solved all problems that required strength, intelligence, or virtue, they have slowly become dissolute and naive. They are described as being smaller than modern humans, having shoulder-length curly hair, chins that ran to a point, large eyes, small ears, and small mouths with bright red thin lips. They are of sub-human intelligence, though apparently intelligent enough to speak, as they have a primitive language. They do not perform much work, and in the book and 1960 film when Weena falls into the river, none of the Eloi help her.
While one initially has the impression that the Eloi people live a life of play and toil-less abundance, it is revealed that the Morlocks are attending to the Eloi's needs for the same reason a farmer tends cattle; the Morlocks use the Eloi for food. This is why there are no old people, and why the Eloi seem to fear the dark.
We are given a portion of the equation from the 'talking rings from george pal's time machine.

Yet the 'Time Machine' itself gives further evidence that this is not the end of the Eloi 'modification'.
According to Wiki:

A portion of the book written for the New Review version, later published as a separate short story, reveals that a visit by the Time Traveler to the even further future results in his encountering rabbit-like hopping herbivores, apparently the descendants of the Eloi. They are described as being plantigrade (with longer hind legs) and tailless, being covered with straight greyish hair that "thickened about the head into a Skye terrier's mane", having human-like hands (described as fore feet) and having a roundish head with a projecting forehead and forward-looking eyes that were obscured by lank hair.


Once again we find ourselves looking at a post humanoid here. As I said in the last installment we find all kinds of post human races in the Nightlands. These rabbitoid Eloi are simply another variety of the product brand known as Eloi.
The eloi are simply a product for the Earth's masters who might have once been talked about by Charles Fort. We might call them' The Great Old Ones', The cosmic jokers, and a wide variety of names bottom line. We're property and the owners are coming back.

Weena is really the problem. She's a spot really. A throwback and a reject to boot. She goes against everything that the Morlocks want. She's curious, confident,brave, and just intelligent to survive. She also dies in different timelines. More information right HERE

The Time Machine Itself and The Nightlands


. The Sun has gone out and the Earth is lit only by the glow of residual vulcanism. The last few millions of the human race are gathered together in a gigantic metal pyramid,nearly eight miles high – the Last Redoubt, under siege from unknown forces and Powers outside in the dark. These are held back by a Circle of energy, known as the "air clog," powered from a subterranean energy source called the "Earth Current". For millennia, vast living shapes—the Watchers—have waited in the darkness near the pyramid. It is thought they are waiting for the inevitable time when the Circle's power finally weakens and dies. Other living things have been seen in the darkness beyond, some of unknown origins, and others that may once have been human.
To leave the protection of the Circle means almost certain death, or worse an ultimate destruction of the soul. As the story commences, the narrator establishes mind contact with an inhabitant of another, forgotten Lesser Redoubt. First one expedition sets off to succour the inhabitants of the Lesser Redoubt, whose own Earth Current has been exhausted, 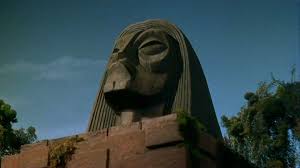 The morlocks and eloi are the first of the so called Abhumans. Again the Nightland provides more insight into their origins :

The term "Abhuman" was used by Hodgson in The Night Land to name (apparently) several different species of intelligent beings evolved from humans who interbred with alien species or adapted to changed environmental conditions and were seen as decayed or malign by those living inside the Last Redoubt, who preserved artificially (to an unspecified extent) their human characteristics, though they were not fit for the new environmental conditions.


As I said the Eloi almost resemble the society in Logan's run. Both have no old or wise folks as leaders, both focus on the here and now, they have only remains of technology, and have forgotten much of what they know. Logan's world is another controlled society of cattle.
All of the technology of these various timelines, Logan's Run, The Time Machine, and even the Nightland are all very regressive almost alien and weird. Why ? Because of the cycle of destruction and rediscovery wrought by the nuclear war, the winters, and loss of bits & pieces over the centuries.

The H.G. Wells book describes the landscape of the year 802,701 as dotted with various porclean green build ruins and gives a very detailed description of the so called 'Palace of Green Porclean'. A former museum that has appeared in many of my games as place where time travelers and dimensional travelers can equip themsleves with some of the weird technology of this era. Many of these porclean ruins may contain a few types of equipment common in the various retroclone rule books.
The morlocks and eloi have appeared in Nightlands in isolated valleys heated by valcanoic vents and engineering.Treasures in these locations have included the following random treasure table.
1d10 Random Treasure Table